three-year-old Bao Bao, the first panda I’d spotted, lived alone in her area since being weaned. Fourteen-month-old Bei Bei and his mother shared a middle enclosure. And on the far end, poppa panda Tian Tian resided. 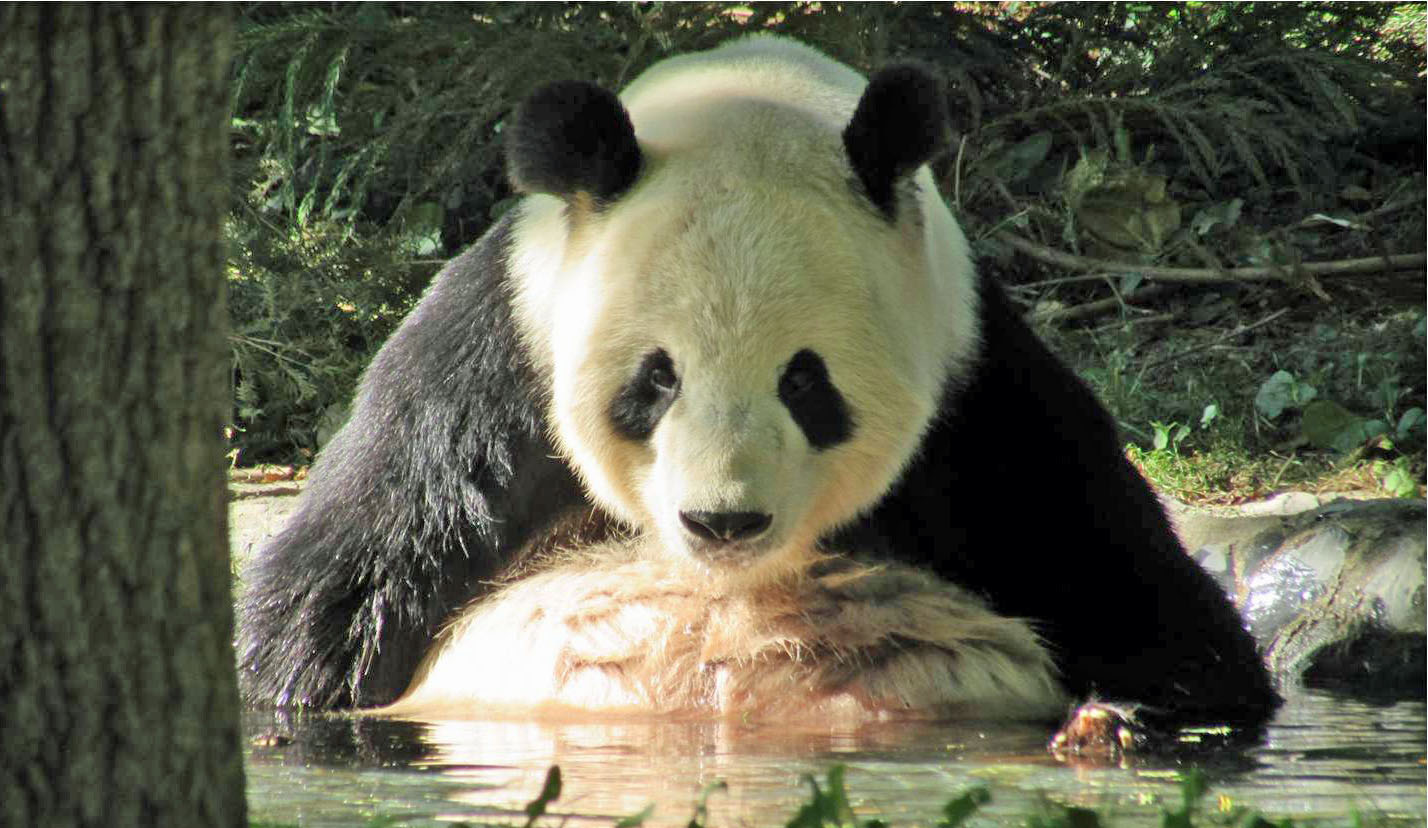 We turned the final bend in the path and stopped to watch Tian Tian. Excitement coursed through me when he waded into a pond, sat down and splashed in the water.

Was this a great photo-op or what? I snapped away, capturing it all on film before moving on.

We arrived at the next enclosure just in time to see Bei Bei peeking out from the indoor habitat’s entrance.

The first sighting of him brought a lump to my throat as my bucket wish list adventure truly began.

Tentatively he waddled out into the spacious tree-filled yard that sloped down a hill to the end closest to the railing. I had to stop myself from jumping for joy since I love the way baby pandas walk. I’d thrilled to countless videos of them trotting along on short legs with their pudgy little bodies. Now I was seeing it for real. 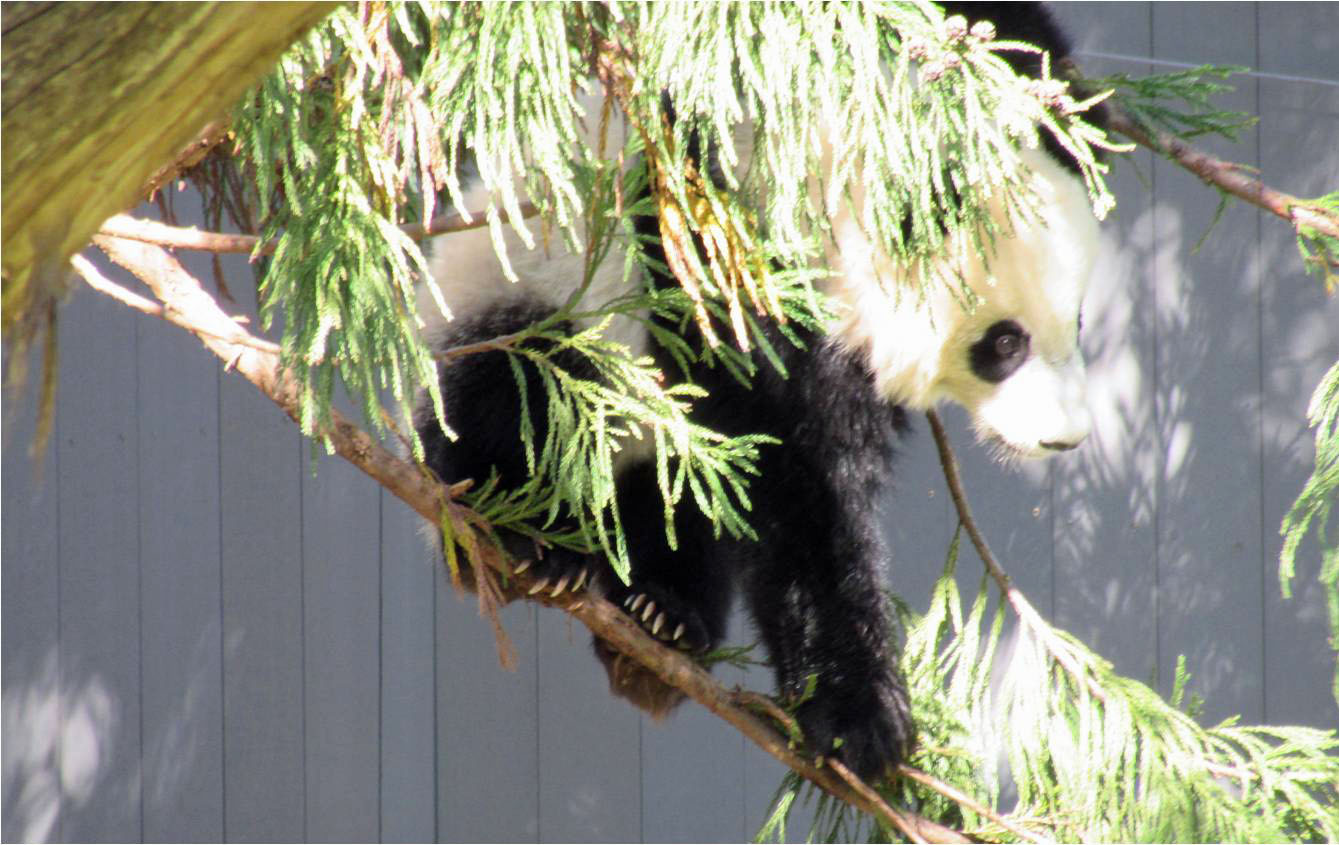 Once outside, Bei Bei practiced a basic panda survival skill, tree climbing. Pandas in the wild must learn to scramble up trees at a young age in order to escape predators. Some of the tall trees were encased in shiny metal to prevent him from climbing them. It’s a good thing because, while panda cubs are a sturdy lot, what goes up often comes down.

Sure enough, Bei Bei slipped sideways and dangled from the limb by his paws. I gasped when he suddenly let go and fell several feet to the ground. Unhurt, he lay on his back for awhile, then rolled over and trotted off.

Meanwhile, his mother watched Tian Tian through a grate in the fence that separated their yards. Bei Bei joined her there. He stood on his hind legs, placed his paws on the grate and also watched his father. But it wasn’t long before he turned and pounced on his mother. 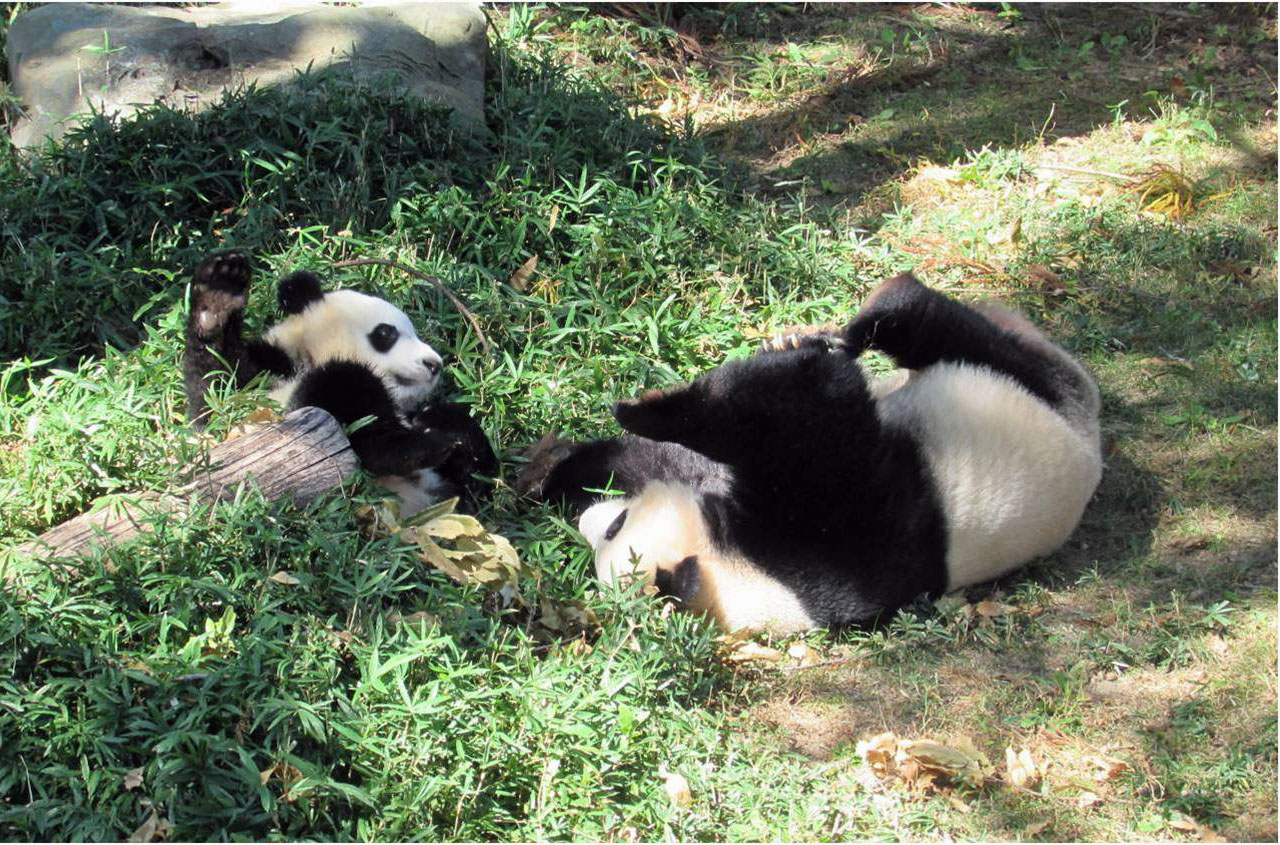 OMG! I’d seen numerous instances of mothers playing with their cubs and found it fascinating to see a giant panda tuck itself into a ball and roll. Together mother and son tumbled down the hill before stopping, feet waving in the air. They did every adorable thing I’d seen on the Internet. It tickled me to actually witness them frolicking together.

The zookeeper remarked on how the pandas were especially active that day.

Then Mei Xiang began feeding on bamboo leaves. Bei Bei played on some logs before waddling over to watch. Suddenly mother and son seemed to pose together and I got a great portrait.

Blessed beyond my wildest dream, I snapped photo after photo outdoors before entering the indoor viewing area. Once again I felt a chill at being in a place I’d often seen on the You Tube videos.

It became a challenge trying to get a decent indoor photo of a panda. They’d enter through one door then quickly vanish through another that connected the three areas.

I asked Nancy to keep an eye on one end while I watched from the other. 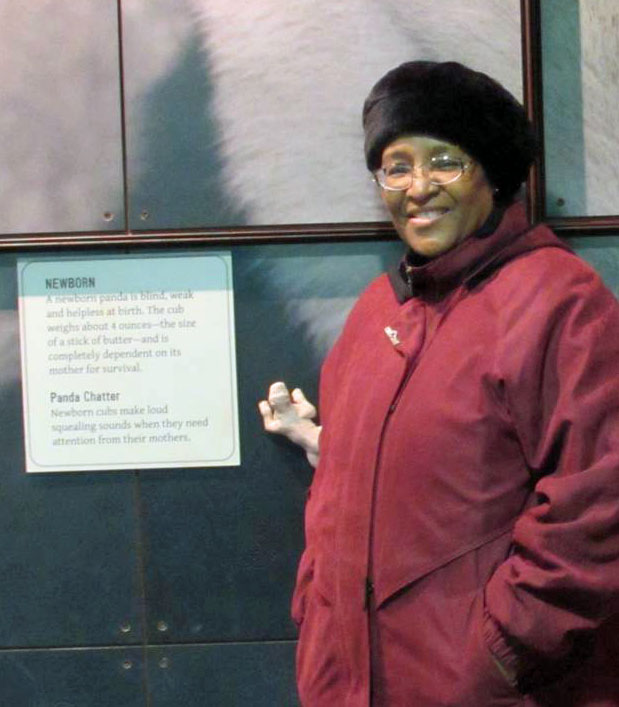 “It’s here!” she said several times, only to have it gone by the time I got there.

Frustrated, I snapped some blurry photos of pandas from behind as they trotted away from me. Finally Tian Tian obliged by climbing on the rocks and sitting still for all of ten seconds.

Several hours passed and my friend patiently stood by while I took pictures to my heart’s content.

We were about to leave when I saw it. Against a large wall mural they’d secured a plastic model of a newborn panda. To commemorate my adventure I asked Nancy to take my picture at that spot, the perfect end to a perfect panda photo-op adventure. 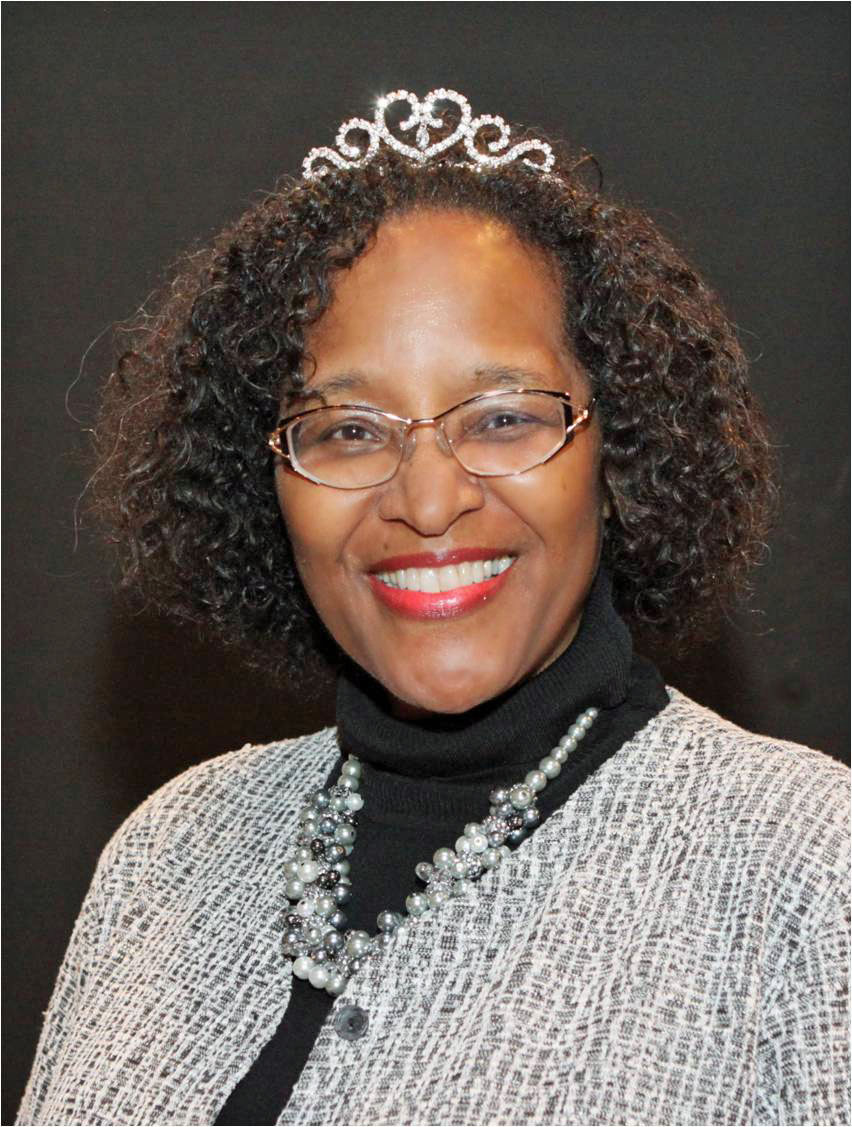 Dylyce Clarke enjoys writing Flash Fiction and news articles, nature photography, and cross-stitching. She is the author of The Royalty Principle: A Guide to Reigning in the Kingdom of Heaven. Her personal testimony includes events which she refers to as "close encounters of the God kind." She lives near the beach in Cocoa, Florida.