What happens when you lose your Passport?

On the fourth day of our Discover South America tour, my best friend and travel companion, Joyce, lost her passport.

Our Grand Circle Discover South America tour began in Santiago, Chile, traveled to Puerto Montt and Puerto Varas in Chile’s Lake District, and on to Bariloche and Buenos Aires in Argentina. The post trip, which Joyce also had scheduled, went on to Rio de Janeiro and Iguassu Falls, Brazil. 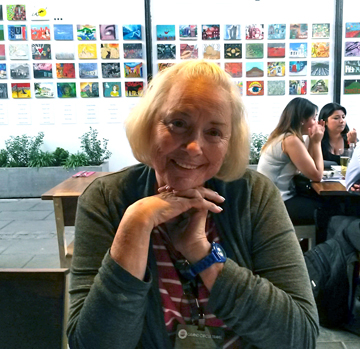 Before the “reckless” happened, Joyce enjoyed a delicious dinner at Tambo in Patio Bellavista, Santiago

For four days we caught up on family gossip, laughed, wined and dined ourselves and explored Santiago’s Bohemian Bellavista neighborhood and the colorful hills of Valparaiso. 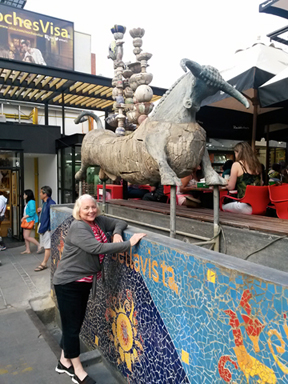 Santiago’s Patio Bellavista, full of inventive art and open-air restaurants, is the heart of the Bohemian Bellavista neighborhood.

On the fourth day, our group flew further south in Chile to the fishing “capital” of Puerto Montt. By Joyce’s own admission, she did something reckless.

In the Puerto Montt airport, she stuck her hand into her pocket and realized her passport was gone.

Too late. The plane, with her passport loose in the overhead, had flown on to Chiloé Island.

Virginia, our Grand Circle tour guide, took Joyce to the Puerto Montt police station where she was given a special letter to allow her to fly back to Santiago - otherwise she would have had to take a bus.

Frantic phone calls on Virginia’s part to Lan Air proved futile in finding the lost passport, even though Joyce knew where it was. 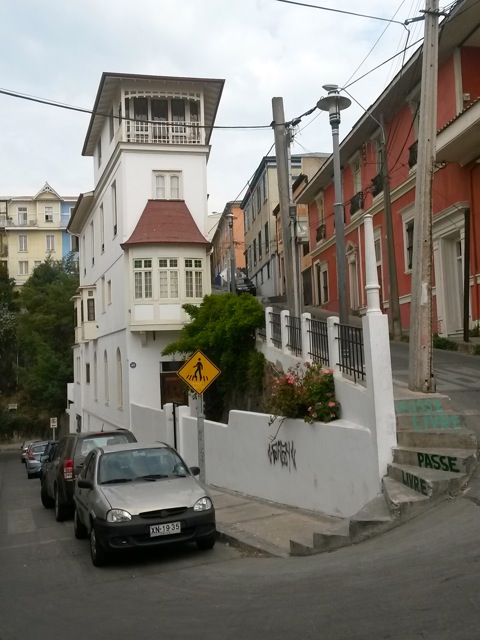 The colorful hills of Valparaiso, the Port city adjacent to Santiago, reminded us of San Francisco.

Here’s the story of Joyce’s subsequent adventure, in her own words:

I want to share my experience at the US Consulate (in Santiago). US being the operative letters.

Not a soul in the front office spoke a word of English. I got a pat down that puts the TSA folks to shame. They took my camera, iPad, phone, and cuticle clippers.

I figured out where to go from there because I can count to twelve in Spanish and luckily it was window eleven. There were two people in front of me.

The man presently being served at the window, was born in Haiti, but said he was a U S citizen. By his graying hair and general appearance I judged him to be somewhere between forty-five and fifty-five.

His new wife, on the other hand, was at best eighteen. Very cute girl holding their two-week-old baby.

He had brought wedding pictures and Chilean status for his son and also a passport showing the baby’s Chilean status. He wanted to get a US passport for his bride. 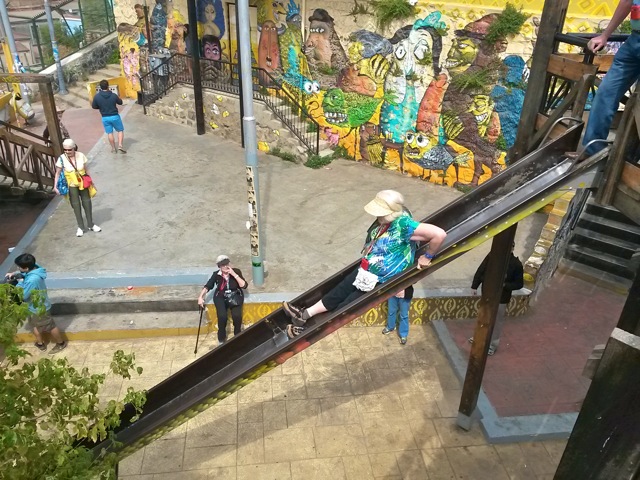 Fun in an artistic plaza up in the hills of Valparaiso, before Joyce lost her passport.

The young man in front of me had had his backpack stolen with his passport in it. He had an American passport although he has been living in Australia since he was three months old. Go figure. He was also waiting to be interviewed by the police.

It is blue and red with a bunch of numbers on it, but he doesn't have the card and doesn't know the numbers and besides that, his numbers are none of her business.

Meanwhile his wife tried to cope with a very fussy baby. She had fed him earlier but now she held him like he was going to break.

I went to her and gestured that I wanted to hold him. After about four or five good pats on the back he gave out a burp that would make any couch potato proud. The fussing stopped.

At last I was handed my replacement passport. Mr. Haiti was still at the counter, the woman with only a passport card was being interviewed by the police, and the young Australian had no clue if he was going to get a new passport.

Lesson learned - never lose your passport! And keep copies, just in case you do!

Antonio, the Grand Circle representative who had picked me up at the airport, had given me his card and said to call his cell when I was done.

I enjoyed a good day and a half in Santiago. I took the funicular railway to the zoo and saw animals I don't remember ever seeing before. I went to the sandwich shop near the hotel, which provided lunch for two days. That first night I went to sleep watching reruns of Pawn Stars, the only thing on cable television in English.

EDITOR AFTERWORD: Joyce was not allowed to travel outside of Chile on her replacement US passport, so she was unable to rejoin the tour and continue on to Buenos Aires, Argentine and Iguassu Falls, Brazil.

The replacement passport only allowed her to fly back to the United States, where she must file a lost passport claim and wait to receive a new official passport.