What happens when you lose your passport, continued

Back at the window an hour later, Mr. Haiti was still there. He was now arguing about his social security card. He was telling the woman that, yes, he had a social security card. It is blue and red with a bunch of numbers on it, but he doesn't have the card and doesn't know the numbers and besides that, his numbers are none of her business.

Meanwhile his wife tried to cope with a very fussy baby. She had fed him earlier but now she held him like he was going to break. I went to her and gestured that I wanted to hold him. After about four or five good pats on the back he gave out a burp that would make any couch potato proud. The fussing stopped.

At last I was handed my replacement passport. Mr. Haiti was still at the counter, the woman with only a passport card was being interviewed by the police, and the young Australian had no clue if he was going to get a new passport.

Antonio, the Grand Circle representative who had picked me up at the airport, had given me his card and said to call his cell when I was done. 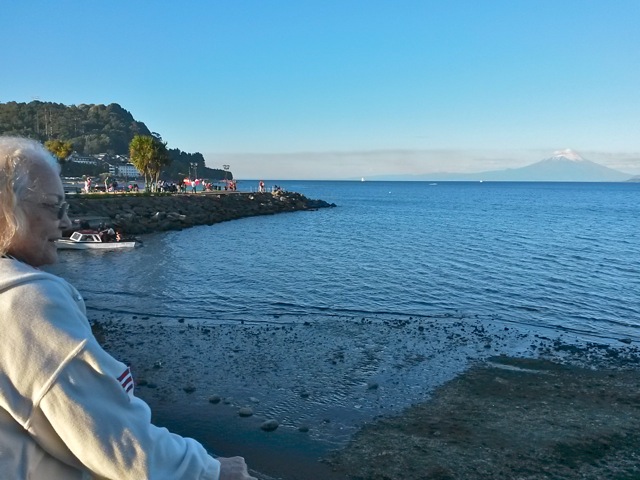 At Lake Llanguihue in Puerto Varas, Joyce says good-bye to Volcan Osorno, before returning to Santiago to report her lost passport at the US Consulate.

I enjoyed a good day and a half in Santiago. I took the fenicular to the zoo and saw animals I don't remember ever seeing before. I went to the sandwich shop near the hotel, which provided lunch for two days. That first night I went to sleep watching reruns of Pawn Stars, the only thing on cable television in English.

EDITOR AFTERWORD: Joyce was not allowed to travel outside of Chile on her replacement US passport, so she was unable to rejoin the tour and continue on to Buenos Aires, Argentine and Iguassu Falls, Brazil. The replacement passport only allowed her to fly back to the United States, where she must file a lost passport claim and wait to receive a new official passport.