Last night we arrived at Lebombo Lodge in South Africa’s Singita Sabi Sand Private Game Reserve, a privately run portion of Kruger National Park. Many thousands of acres that are only accessible to lodge guests (which is only our group of 21 family members.)

Today we're driving along a dirt road at MalaMala. Since 1927 MalaMala Game Reserve has been the largest private Big Five game reserve in South Africa. Over 13,000 hectares, MalaMala lies between the Sabi Sand Reserve and Kruger National Park, sharing a 12-mile border with the latter.

Our ranger says, "Smell that?" 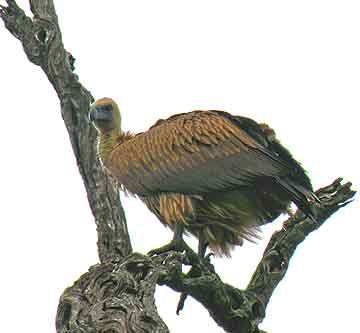 Then we saw vultures.  Our ranger smells death.

Then we see a hyena. Just one. In the jeep, we follow it off road. It doesn't even care. Eventually it lays down in the tall grass as though it's saying, ok, that's enough. I'm not going to lead you to MY food. 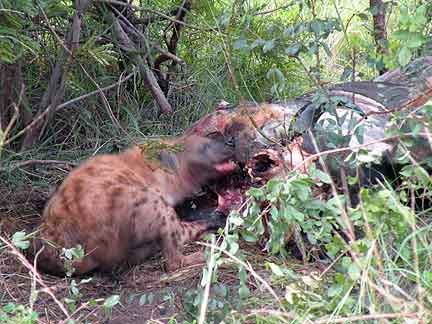 Now the smell is intolerable. Some of us think it’s because we’re parked in a grove of rhino shit. But our guide tells us that's the least of it. It is definitely a carcass.

We keep driving in our land rover, just mowing down trees. We stop and shut down the engine.

Our ranger says, "hear that?"

He follows the sound and stops again. "Hear that?They're chewing and ripping."

He keeps on going and eventually finds a small covered cove where three hyenas are chowing down on a buffalo carcass.

It's evening. The light is getting dim. We're snapping photos, videotaping and even using flash.

We hear all kinds of hyena growling and howling. Then one hyena jumps up and away. Another hyena wanted to join the feast, but there is a ritual, and the newcomer has to ask permission. We stayed quite awhile for a bit more action, more of the pack joining, and a little scuffle. Amazing—and stinky. 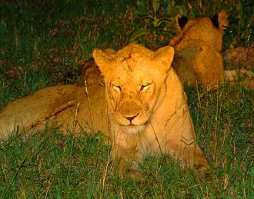 We drive to an open meadow where a pride of lions are lounging. By now it’s pitch black. We drive right up to them. We're in an open jeep, in a wide open meadow. We are among at least two mothers, one father, seven cubs and five teens.

It is DARK. We shine spotlights right on the lions. They lounge, they wrestle. But they aren’t hungry. They never leave to hunt, and it’s great to see, to be right among them. We’re so close, only four yards from some of them.

Although privately managed, Lebombo Lodge still has to follow some of the National Park's rules and we are not free to just hightail it off road any time we please. We are only allowed off-road to track "the big five"—lion, leopard, elephant, rhino and buffalo.

The next day we stop at the side of the dirt road and take a short walk to the end of some craggy rocks.

We are on the edge of a green river filled with hippos. 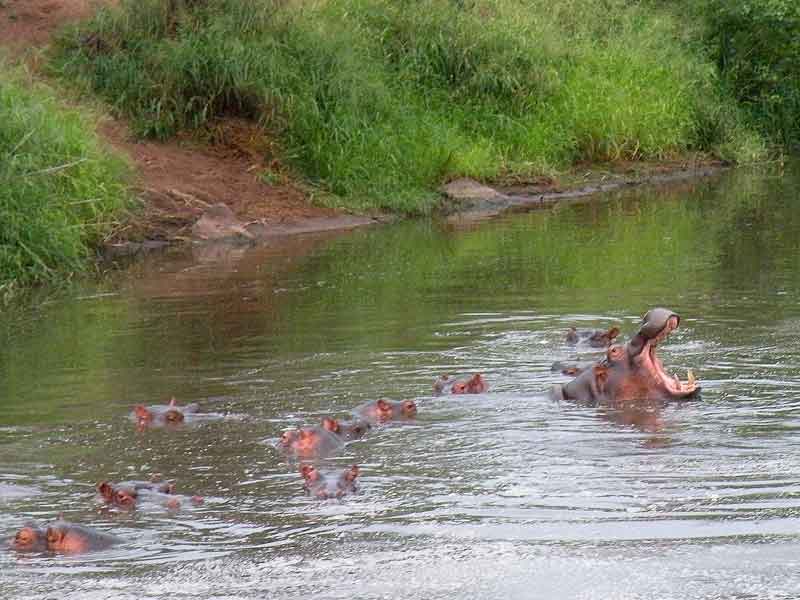 At least 17. We could have watched them do their hippo thing...which is nothing...for hours.

I catch a photo of a hippo with its mouth wide open. I hope the photo doesn’t come out blurry.

Hippos are surprisingly, loudly, vocal—we hear them all night from our rooms above the river. Later that night, on our way back to the lodge, we saw two hippos out of the water. They look like giant pigs. They're shy. They ran away fairly quickly. We felt lucky to see them, because most of the time they're in water.

Kruger National Park is the size of Massachusetts. Lebombo Lodge is built on stilts above ground, and can be completely dismantled and taken away in 30 days, leaving only a few patches of bare ground.

If you enjoyed this essay, please subscribe below to our FREE e-zine, Living the Adventuress Life.