“Pickpockets and theft are the travel industry’s dirty little secret,” says Bambi Vincent, author of the book  'Travel Advisory! How to Avoid Thefts, Cons, and Street Scams While Traveling.'

Through more than eighty countries on six continents, Bambi has traveled with husband, Bob Arno, seeking out and capturing on photograph and video the actions of scammers, pickpockets, and con artists. 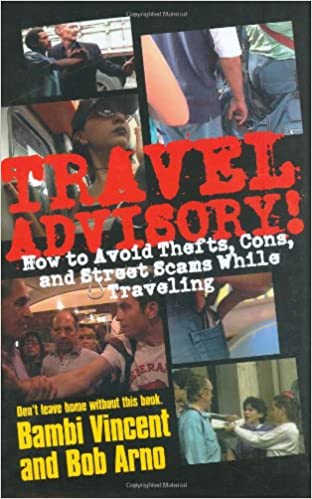 “The victim of choice is the tourist, who is rich in the eyes of thieves,” says Bambi. “In tourist cities hundreds of incidents per day are reported to police. We join in the tourist parade, visit the guidebook highlights, and lurk where the crowds are.”

In her book, she exposes the unsavory characters who live off your cash and credit cards, describing how she and Bob find, follow, and film street thieves with hidden cameras, then interview them.

She says methods as subtle as stealth and as brutal as mugging are used to affect “the transfer of wealth.”

Johnnie Downs travels to all the top sporting events in the United States. His favorite tool is a garment bag which he calls his “shade”, a prop to hide his theft of a “sting,” or a wallet.

Dressed in a neat business suit, he flies to his destination penniless. He describes his recent trip to Las Vegas:

Translation: steal the wallet from his front trouser pocket.

Downs says, “The best thing that women can do is put their purses in front of them, not on their backs or behind their arm.”

Bob began his career as a “professional” thief—a comedy stage pickpocket. He stole from his audience, incorporating techniques he learned from real thieves, and then returned what he took.

That’s when he and Bambi began their field research on street thievery. 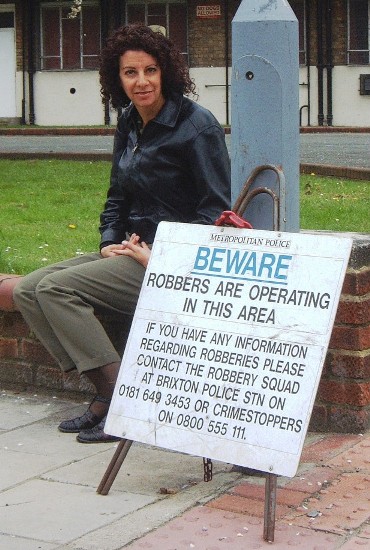 Bob explains, “Although the theatrical theft of a wallet on stage is entirely different from lifting one in the street, the principles of distraction are the same.”

They began their hunt for pickpockets in Rome, decked out with pounds of cameras, battery backs, tripod, and bag of video accessories.

As smaller and smaller cameras of broadcast quality became available, they took advantage of the technology, like today’s hidden camera sunglasses.

“As we learned to recognize more sophisticated thieves, we were able to capture their deeds with more sophisticated devices.” Even so, it’s unpredictable. “You can’t take for granted that everything will be on film when shooting from the hip. We make plenty of camera mistakes in moments of high tension or excitement.”

Along the way, Bambi and her husband have been threatened with rocks, hit, spit upon, flipped off, and mooned.

“I’m constantly astonished at how many thieves talk to us,” she says. “Bob will steal something from a thief, then return it. His talent instantly establishes rapport and, more often than not, they’ll talk to us.”

One handsome Italian thief even offered the couple a thousand dollars a day each if they’d partner with him.

Bambi says that rogues range from babies to the elderly, and except for their behavior and possible telltale “prop,” they’re almost impossible to pick out of a crowd.

“It’s our deepest instinct to warn others of the danger we’re so aware of.” She smiles sadly. “But we let the situation take its course. We remind ourselves that we’re researchers in the field, observing and documenting a specific behavior, and we use the knowledge we gain to educate many."

She admits to twinges of guilt, but “we refrain from interfering.” 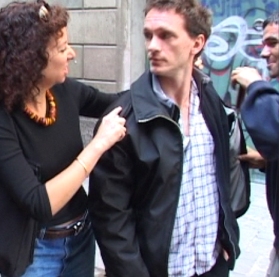 The couple’s corporate presentations include real-life travel safety education, and a serious lecture with humor and demonstrations. They show video footage of street thieves in action, teaching law enforcement how to recognize perpetrators, and lay audiences how to protect themselves.

Thiefhunter - not without its ups and downs

In Barcelona, Spain, they skirted the edge of a crowd watching a public concert outdoors. They observed a pickpocket who stood near a closed lotto booth, facing an inward corner, but looking away.

“He was doing something with his hands,” Bambi says.

When he strode away, she ran to the kiosk to see what he’d been doing. Peering into the shadows, “foul fumes hit me in the face. He was peeing!”

“What scared me most were the tales of the gassers, who knock you out in the dead of night by fumigating your compartment from under the door.”

She admits they were not well-rested when they arrived at Prague at nine in the morning.

Is the Thiefhunter lifestyle worth it?

Bambi thinks so. “Finding street thieves is a real high, like finding a leopard on safari in Africa, then observing and photographing it. When I’m filming a suspected pickpocket or street scammer, I get right up close, within punching range, and although I worry about potential reactions, I want the footage. Yet I don’t want to anger the thief, because we will try to interview him or her.”

She says when they’re onto their quarry the tension and excitement are sky-high.

“When we get good footage that shows a thief’s technique, or a great interview in which secrets are revealed, the rush will last us a week.”

Bambi believes that when it comes to catching thieves in the act, she and her husband have an advantage over law enforcement officers.

“We don’t fit any (police) profile points except for observant eyes, which sunglasses cover. Plus we’re a couple, we hold hands.”

The disadvantages are: “We often don’t speak the local language. We have no authority to arrest. We aren’t prepared for a physical scuffle, and Bob, with his narrow 6’5” build doesn’t exactly blend into a crowd. But, pictures we get, video footage, we get.”

Bambi recommends that your travel planning include a thorough research of your destination, checking on crime and security issues, too.

“Knowing what commonly happens and where gives you the edge,” she maintains. “The goal is to be mentally prepared and to understand the local risks.” 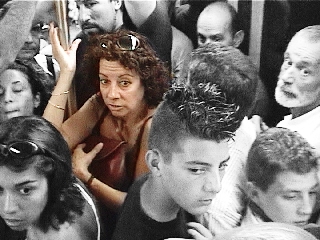 She adds that “Too many travelers forget their good judgment when they pack their pajamas. High on excitement, relaxed after a beer or an unaccustomed lunchtime glass of wine, disoriented with jet lag, going with the flow—too many fall victim to the dreaded Tourist Suspension of Common Sense.”

She calls it, “Holiday Headspace.”

She maintains that reductions in personal crimes can happen through your smarter stashing and raised awareness.

“Pickpockets will always go for the easiest victims,” says Bob. “Make it a little bit difficult for them, and they’ll work on somebody else.”

“Personal security is an art, not a science,” Bambi adds. “Once you know the risk, you can adjust your awareness and the level of your security precautions. Thus prepared, you’ll turn your travel concerns into travel confidence.”

Bambi grew up in California and studied art at San Jose State University and law at Santa Clara University. She and Bob met on a bus in Mexico, and have made their home for many years in Las Vegas.

“While I trek the planet with Bob, our furniture lives in Las Vegas,” she jokes.