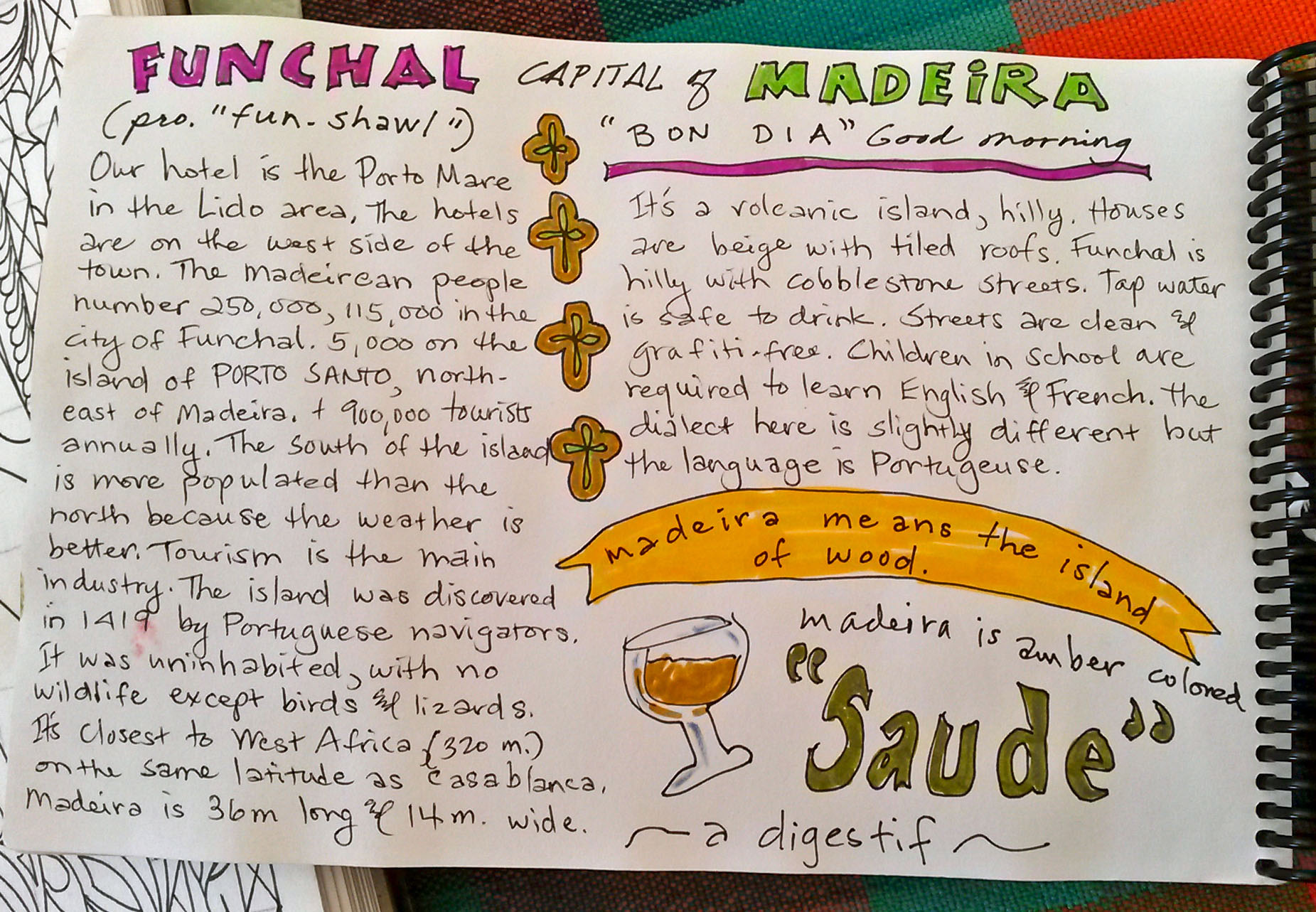 Funchal (pronounced "fun-shawl") is the capital of the island of Madeira, off the coast of Portugal. Our hotel is the Porto Mare in the Lido area. The hotels are on the west side of the town. The Madeirean people number 250,000--115,000 in the city of Funchal. Five thousand live on the island of Porto Santo, north-east of Madeira. Nine hundred thousand tourists visit annually.

The south of the island is more populated than the north because the weather is better. Tourism is the main industry. The island was discovered in 1419 by Portuguese navigators. it was uninhabited, with no wildlife except birds and lizards. it's closest to West Africa (320 meters) on the same latitude as Casablanca. Madeira is 36 m long and 14 m wide.

It's a volcanic island, hilly. Houses are beige with tiled roofs. Fuchal is hilly with cobblestone streets. Tap water is safe to drink. Streets are clean and graffiti-free. Children in school are required to learn English and French. The dialect here is slightly different but the language is Portuguese.

"Madeira" means "the island of Wood. Madeira wine is considered a digestif, what you drink after dinner. 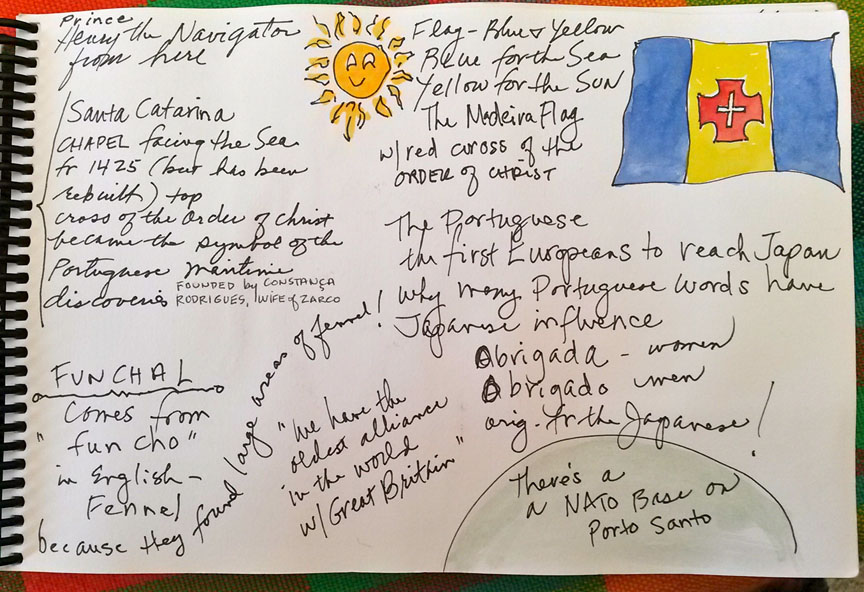 FUNCHAL comes from "fun cho", or fennel in English, because they found large areas of fennel here.

Prince Henry the Navigator is from here. The Santa Catarina Chapel has faced the sea since 1425. Its top cross, signifying the Order of Christ, became the symbo of the Portuguese Maritime discoveries.

The chapel was founded by Constanca Rodrigues, wife of the navigator João Gonçalves Zarco who discovered the Archipelago of Madeira in the service of Prince Henry the Navigator.

The Portuguese flag is blue for the sea and yellow for the sun. The Madeira Flag has the red cross of the Order of Christ.

The Portuguese were the first Europeans to reach Japan, which is why many Portuguese words have a Japanese influence.

"We have the oldest alliance in the world with Great Britain." 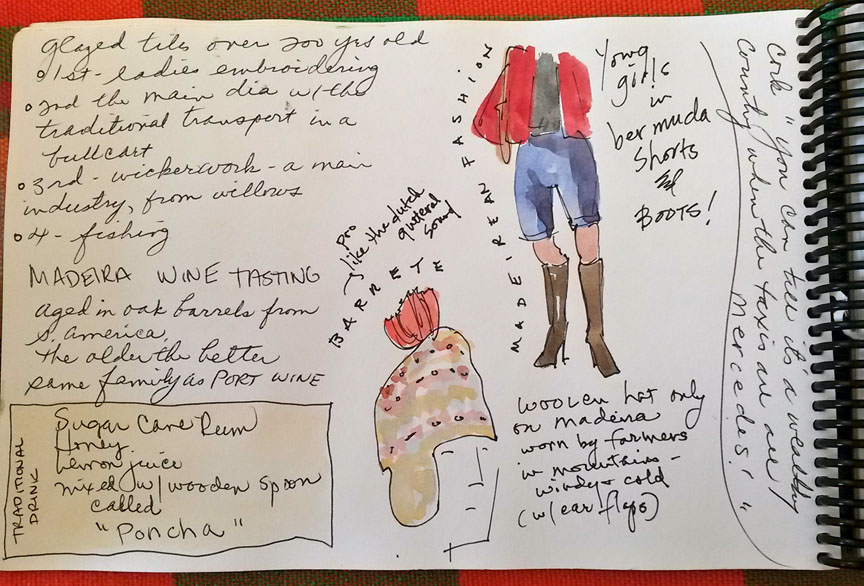 Cork says, "You can tell it's a wealthy country when the taxis are all Mercedes!"

Most impressive were the young girls in Bermuda shorts and high-heeled boots walking on cobblestones!

Woolen hats here are only worn by farmers in the mountains where it's windy & cold, which is why they are knitted with ear flaps.

A traditional drink called "Poncha" is made with sugar cane rum, honey, lemon juice and mixed with a wooden spoon.

We attended a tasting of Madeira, aged in oak barrels from South America, the older the better. Madeira is in the same family as Port wine.

Many of the glazed tiles are over two hundred years old.

Wickerwork and fishing are main industries. 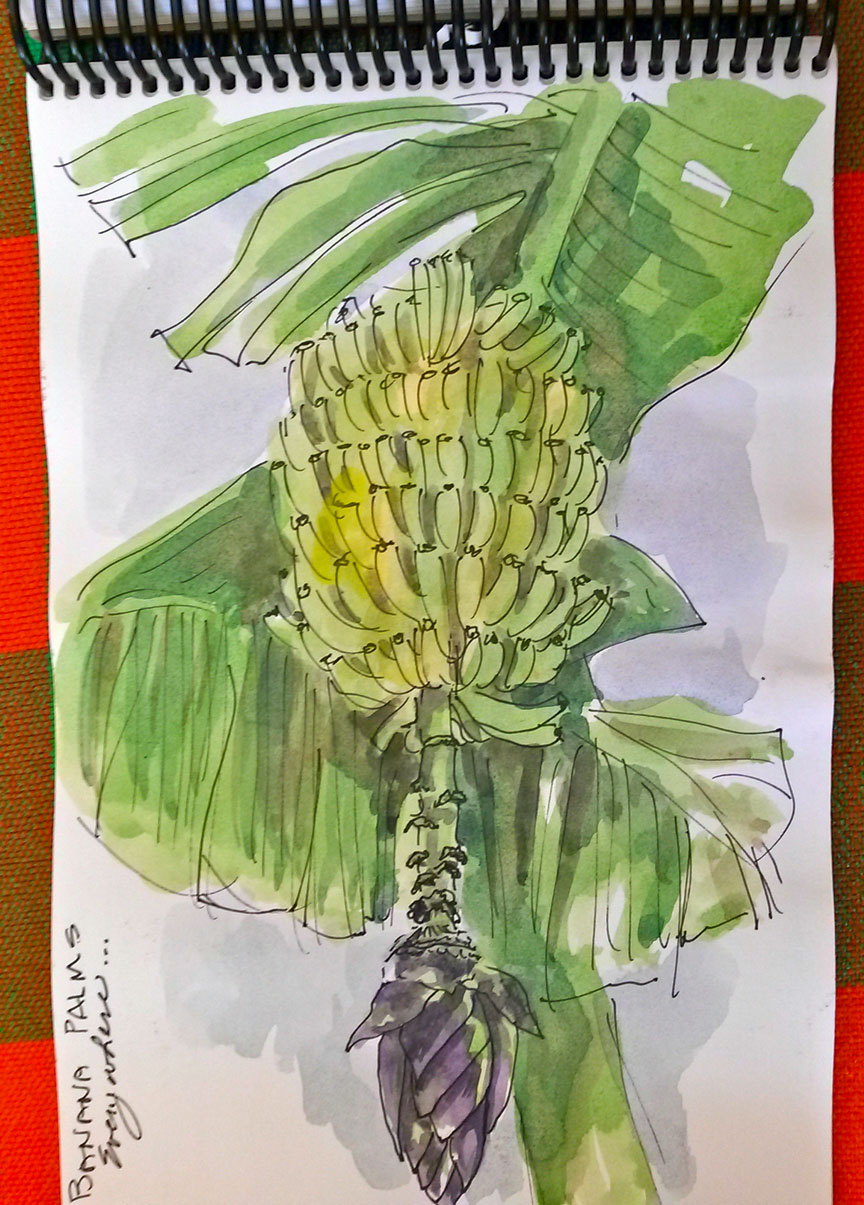 The island is full of banana palms, so naturally I had to draw them... 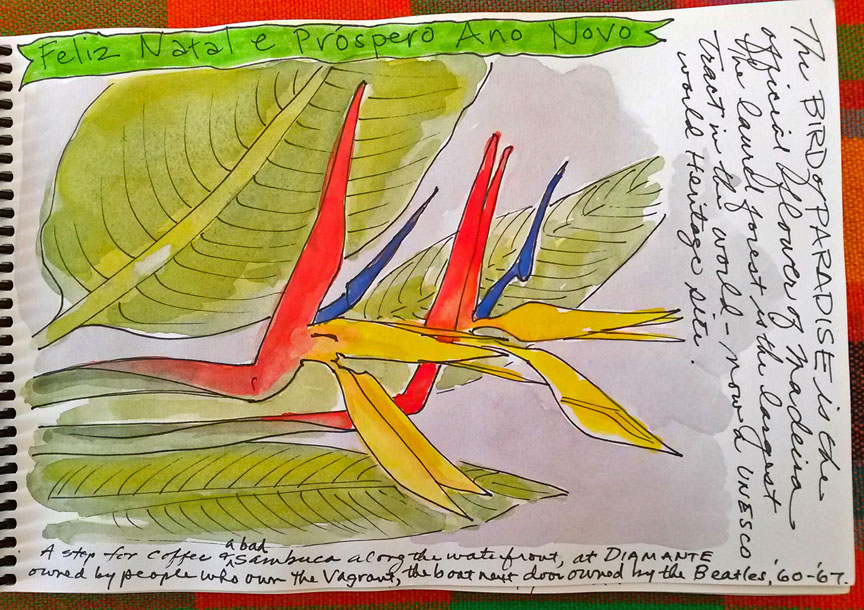 The Bird of Paradise is the official flower of Madeira. The laurel forest is the largest tract in the world - now a Unesco WORLD HERITAGE SITE.

We made a stop for coffee and a bad Zambuca along the waterfront, at DIAMANTE, owned by people who own the Vagrant, the boat next door owned by the Beatles, '60 to '67. 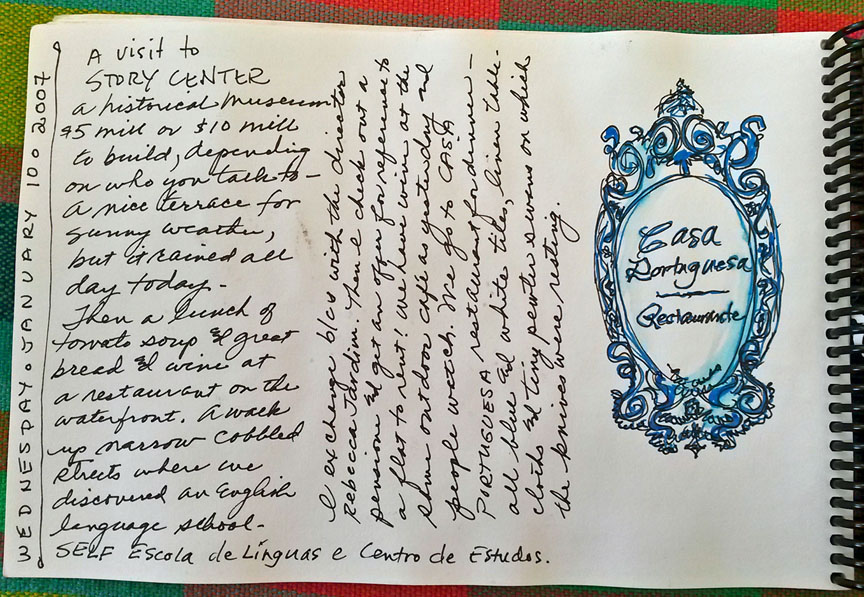 Wednesday, January 10, 2007 - A visit to Story Center, a historical museum that cost five or ten  million to build, depending on who you talk to. a nice terrace for sunny weather, but it today rained all day.

Then a lunch of tomato soup and great bread and wine at a restaurant on the waterfront. Waiters stood in front of establishments hawking their menus. When one hailed us and we told him we'd already eaten, he said, "Eat again!"

Afterwards a walk up narrow cobbled streets where we discovered an English language school. I exchanged business cards with the director, Rebecca Jardim. Then I checked out a pensione and got an offer for a flat to rent.

We had wine at the same outdoor cafe as yesterday and people--watched.

For dinner we visited the restaurant Casa Portuguesa, all blue and white tiles, linen tablecloths, and tiny pewter swans on which the knives rested. 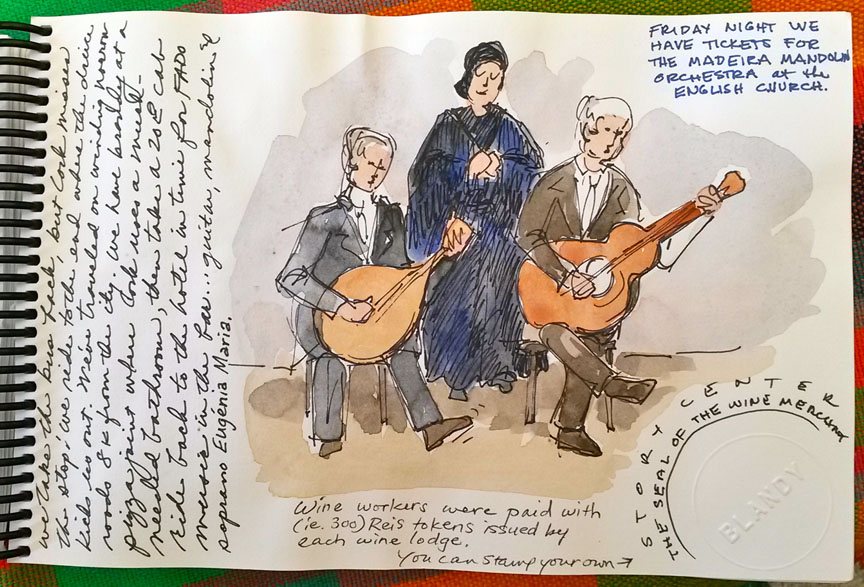 At the Story Center I was able to get a real seal in my art journal page of the Wine Merchants.

We took the bus back but Cork missed the stop. As we climbed one of Madeira's many hills, the woman in the seat across from us crossed  herself. The bus traveled on windy roads 8 k from Funchal to the end of the line where the driver kicked us out. We had a brandy at a pizza joint where Cork used a much-needed bathroom, after which we took a twenty-euro cab ride back to the hotel. We arrived in time for Fado music in the bar. Guitar, Mandoin and soprano, Eugénia Maria.

Friday night we had tickets for the Madeira Mandolin Orchestra at the English Church. 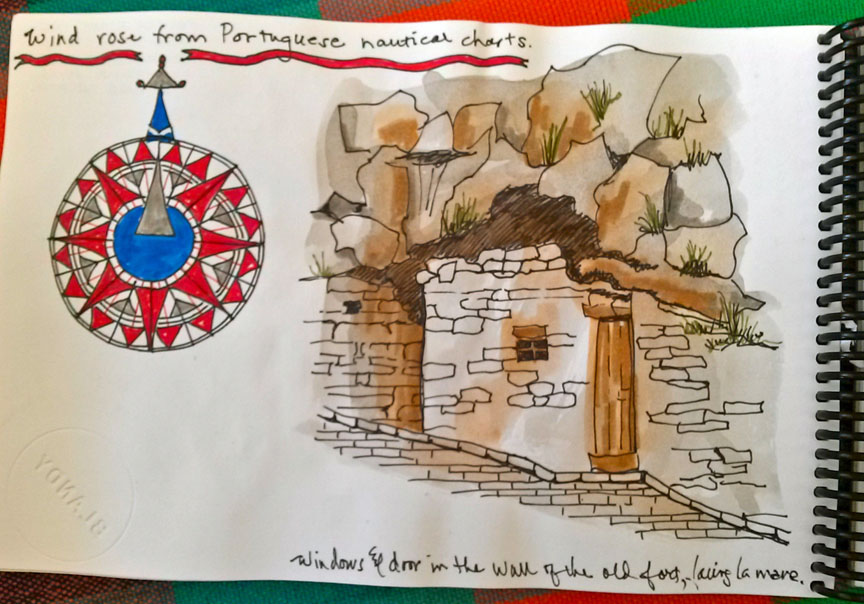 This is my drawing of the Wind Rose found on Portuguese Nautical Charts.

I also drew these windows and door in the stone wall of the old fort, facing the sea. 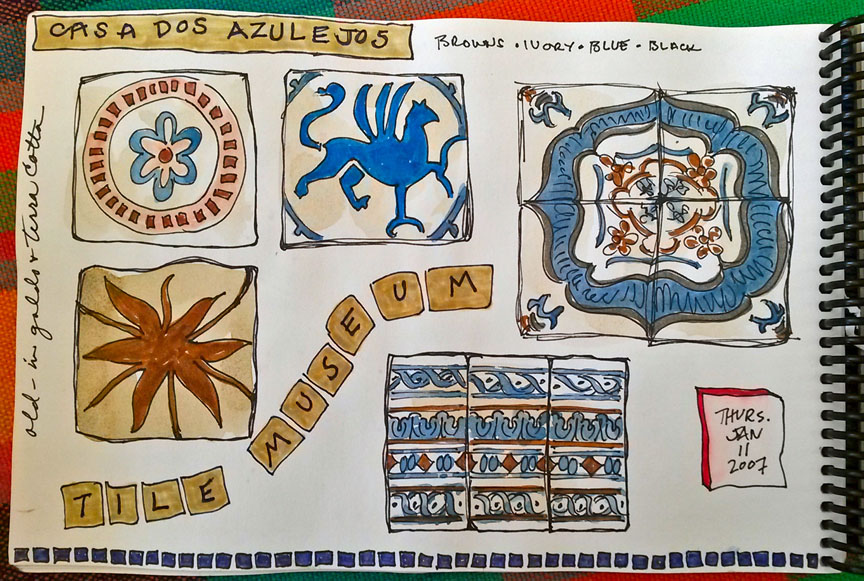 Thursday, January 11, 2007 - At Casa Dos Azuelos, a tile museum, we learned all about Portuguese tiles...really fun to draw and paint. 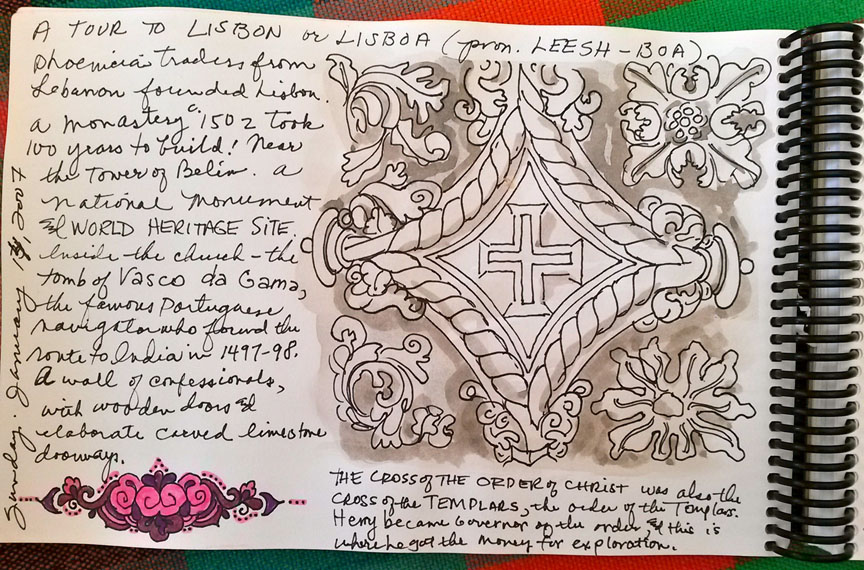 A monastery circa 1502 took 100 years to build! It's near the Tower of Belem, a national monument and World Heritage Site.

Inside the church is the tomb of Vasco da Gama, the famous Portuguese navigator who found the route to India in 1497-99. There is a wall of confessionals, with wooden doors and elaborate carved limestone doorways. 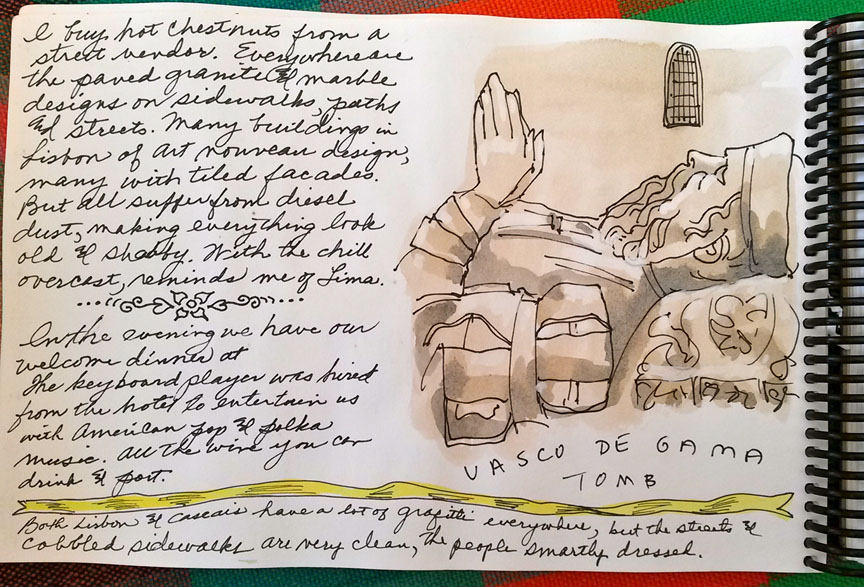 Everywhere are the paved granite and marble designs on sidewalks, paths and streets. Many buildings in Lisbon of Art Nouveau design, many with tiled facades. But all suffer from diesel dust, making everything look old and shabby. With the chill overcast, Lisbon reminded me of Lima, Peru.

In the evening we had our GCT welcome dinner. The keyboard player was hired from the hotel to entertain us with American pop and polka music. All the wine you could drink, and port.

Both Lisbon and Cascais have a lot of graffiti everywhere, but the streets and cobbled sidewalks are quite clean, the people smartly dressed. 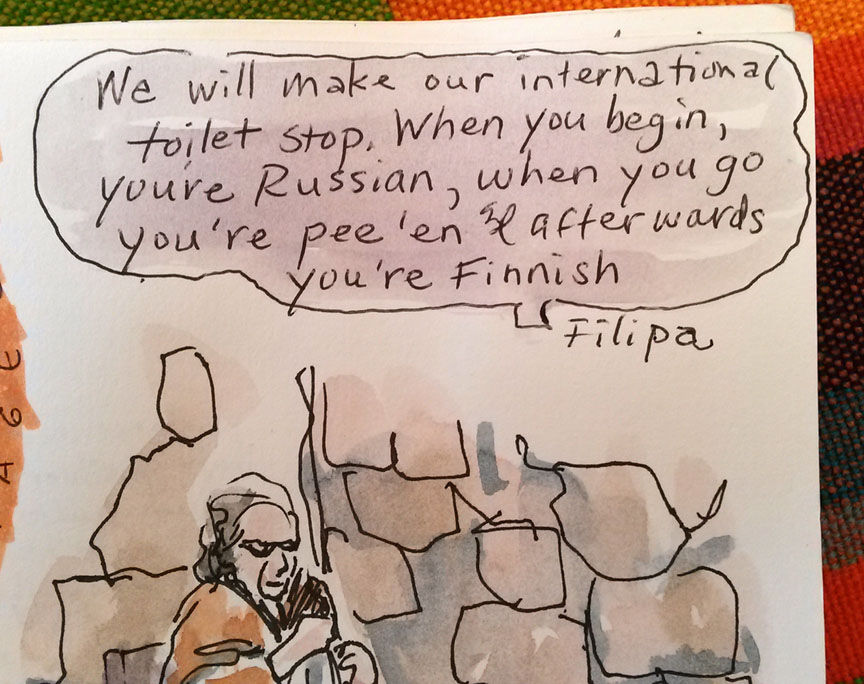 Filipa, our GCT Portuguese tour guide said, "We will now make our international toilet stop. When you begin, you're Russian, when you go you're pee 'en and afterwards, you're Finnish." 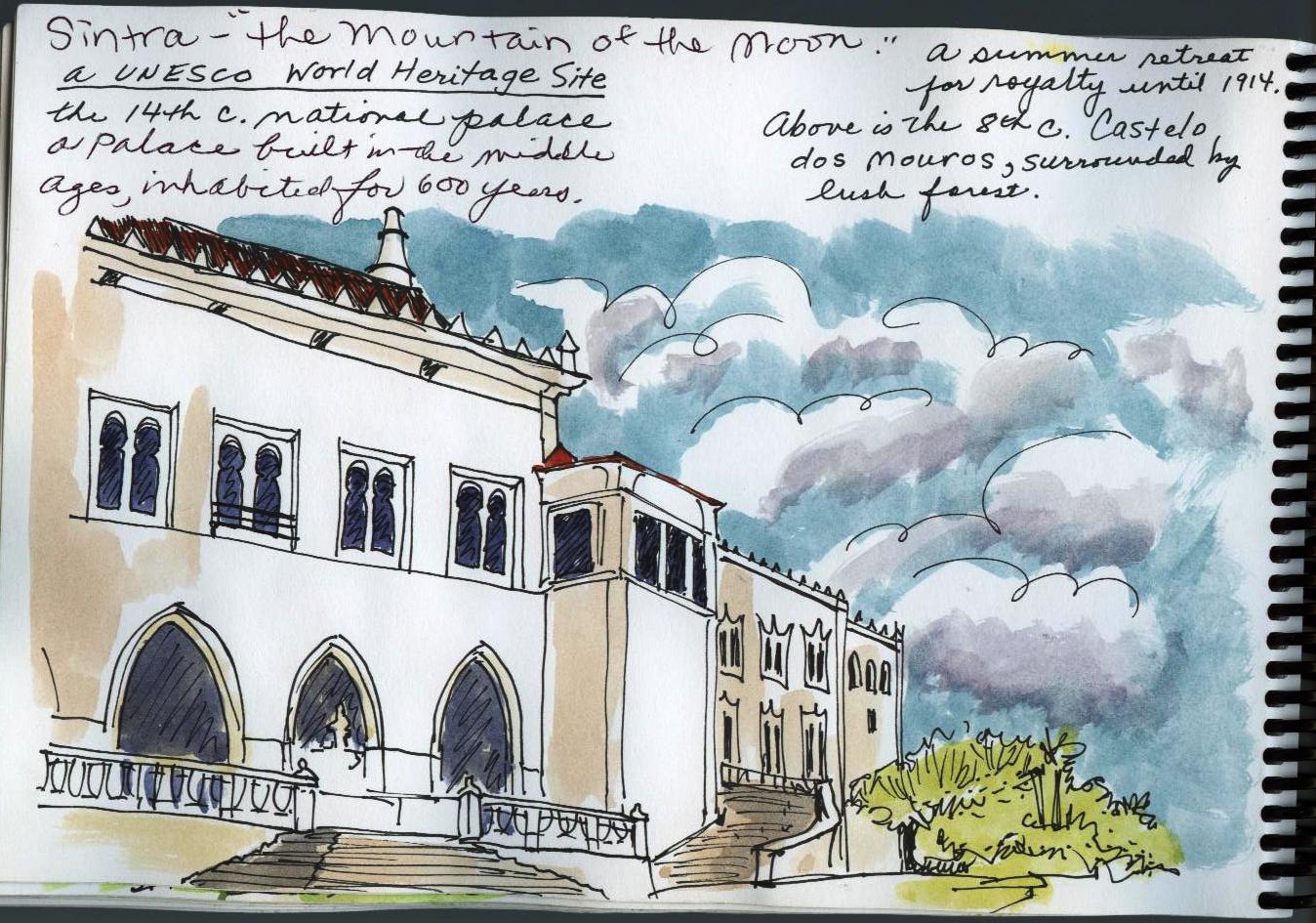 Sintra, a Unesco World Heritage Site, is the site of a 14th century National Palace of Queluz and historical gardens built in the middle ages and inhabited for 600 years.

Sintra means "The Mountain of the Moon." it was a summer retreat for royalty until 1914. Above is the 8th century Castelo do Mouros, surrounded by lush forest. 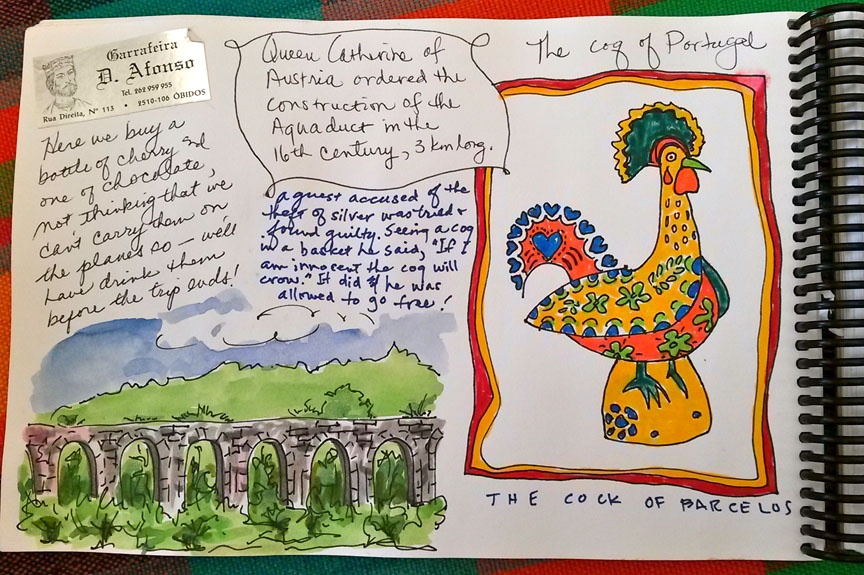 Garrafeira D. Afonso - here we buy a bottle of charry and one of choclate, not thinking that we can't carry these on the planes, so -- we'll have drunk them before the trip ends.

The coq of Barcelos: A guest accused of the theft of silver was tried and found guilty. Seeing a coq in a basket he said, "If I am innocent the coq will crow." It did and he was allowed to go free.

That's how the coq became the symbol of Portugal. 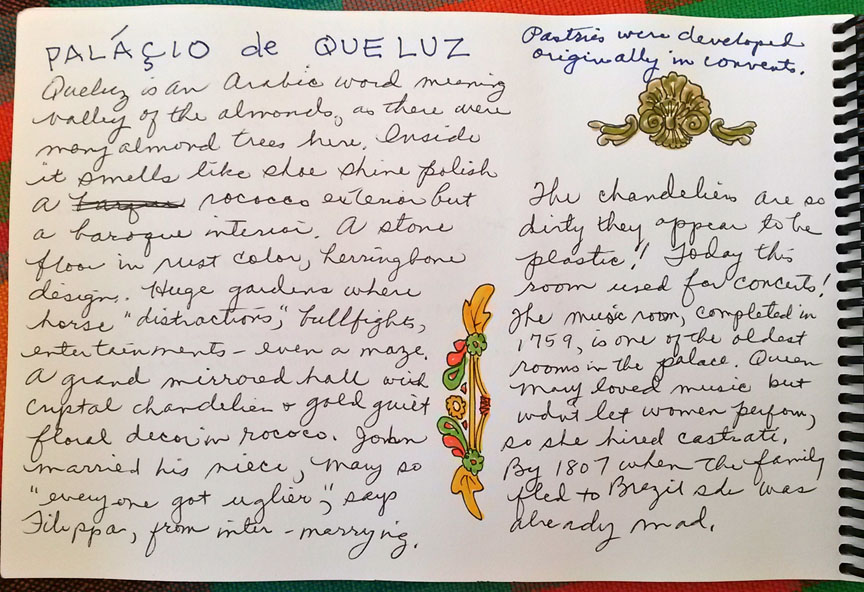 Paláçio de Queluz - Queluz is an Arabic word meaning 'valley of the almonds' as there were many almond trees here. Inside it smells like shoe shine polish. A rococo exterior but a baroque interior. A stone floor in rust color, herringbone design. Huge gardens where horse "distractions", bull fights, entertainments, even a maze. A grand mirrored hall with crystal chandeliers and gold quiet floral decor in rococo. John married his niece, Mary, so "everyone got uglier," says Fcilipa, from inter-marrying.

The chandeliers are so dirty they appear to be plastic. Today this room is used for concerts. The music room, completed in 1759, is one of the oldest rooms in the palace. Queen Mary loved music but wouldn't let women perform, so she hired castrati. by 1807 when the family fled to Brazil she was already mad.

The "pillow" pastries were originally developed in convents. 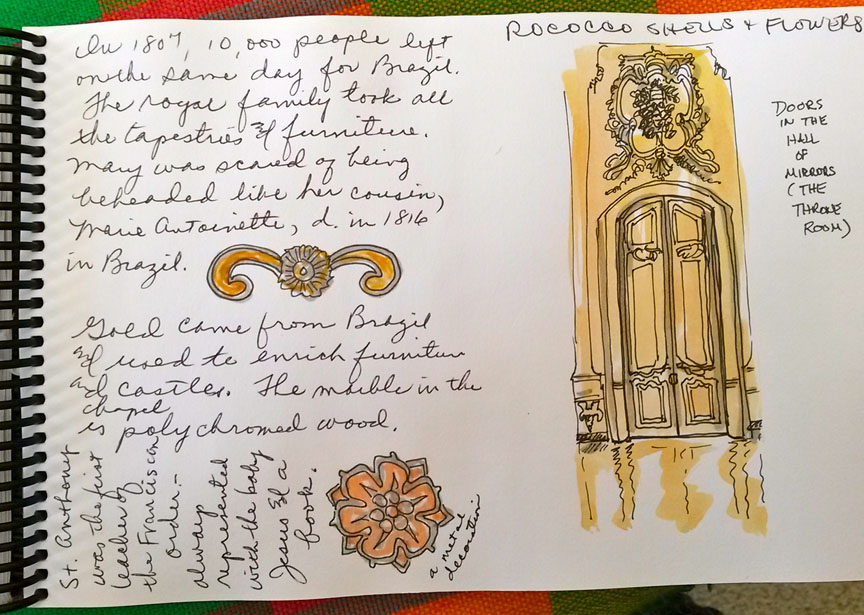 In 1807, 10,000 people left on the same day for Brazil. The royal family took all the tapestries and furniture. Mary was scared of being beheaded like her cousin, Marie Antoinette, died in 1816 in Brazil.

Gold came from Brazil and used to enrich furniture and castles. The marble in the chapel is polychromed wood.

Saint Anthony was the first teacher of the Franciscan order - always represented with the baby Jesus and a book. 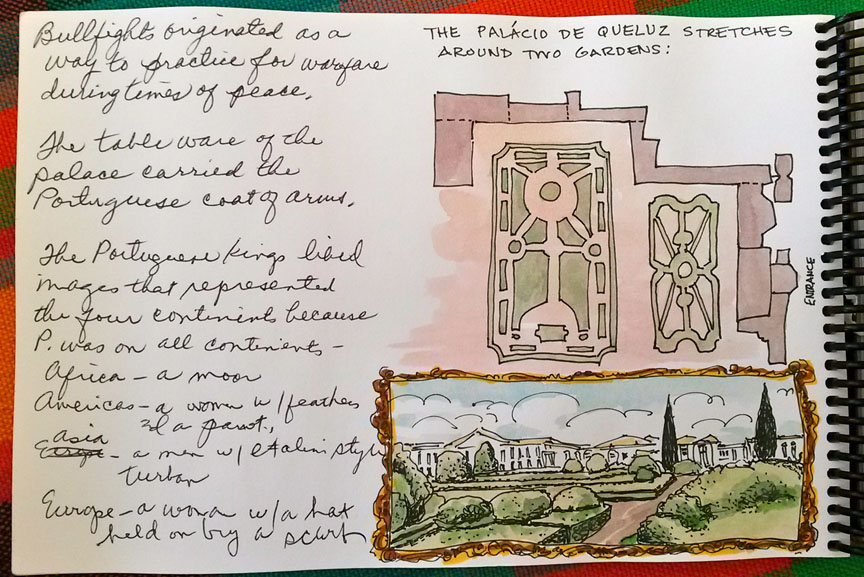 Bullfights originated as a way to practice for warfare during times of peace.

The tableware of the palace carried the Portuguese coat of arms.

The Portuguese kings liked images that represented the four continents because Portugal was on all continents:

Americas - a woman with feathers and a parrot

Asia - a man with an  Italian-style turban.

Europe - a woman with a hat held on by a scarf.