Camel Ride in a Sandstorm

A camel ride in a sandstorm is just the thing to do when you visit Morocco. 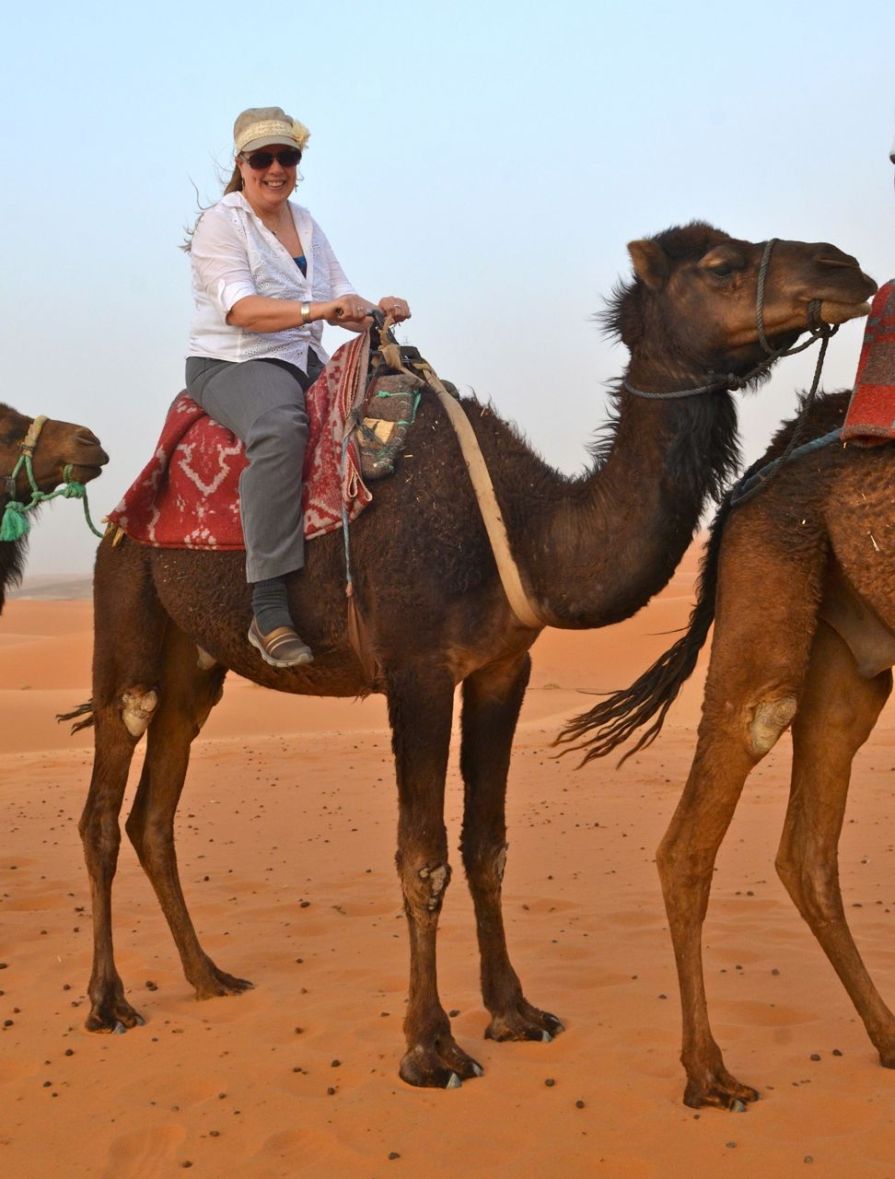 In Morocco, Kim Welsh is mounted & ready to ride!

A recent visit brought me up close with dromedaries during an excursion to the Erg Chebbi dunes at the remote Merzouga oasis.

The Merzouga oasis is a desert gateway near the Algerian border at the western edge of the continent-spanning Sahara. 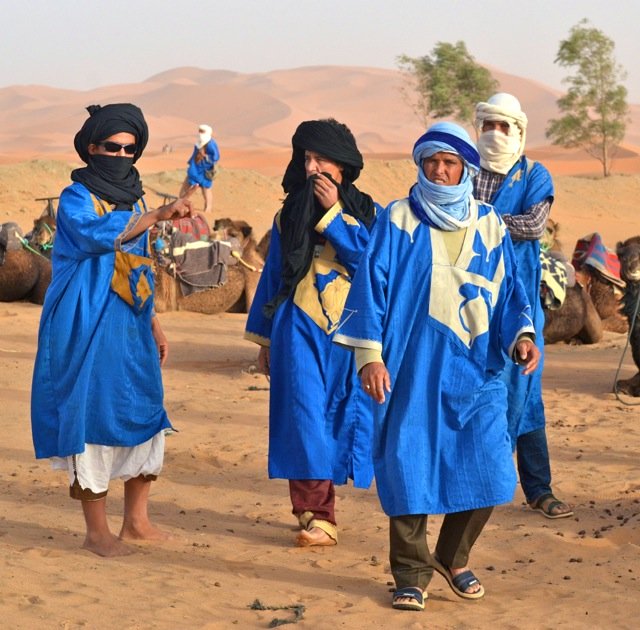 At 4:30 on a warm and still spring afternoon, our group of 40 spirited adventurers headed out in several 4x4s from the exotic Xaluca Resort in Erfoud, a former caravan staging post, for the 38 mile trip to Erg Chebbi, criss-crossing the stony terrain on unpaved roads. 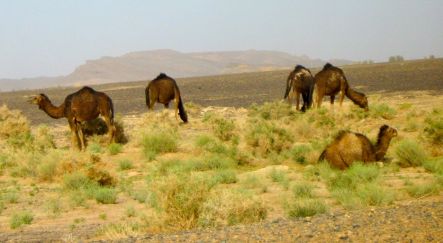 Our white-robed driver Rashid pointed out stray livestock and the many abandoned mud huts and corrals among the sparse vegetation.

En route we visited the encampment of a nomadic Berber family of goat herders who proudly showed us their compound and spacious tent of woven goats’ wool.

After tea and photos, we resumed the drive and reached the sand’s edge just as light gusts riffled the ends of our long pre-turban scarves, traditional protection from the desert’s harsh elements.

To the south and east, miles of the spectacular hollows and peaks of the vermillion dunes, some topping 800 feet, spread before us.

As we enjoyed our first view of this vast expanse, lines of camels with tasseled reins and colorful saddle blankets were led to us.

Our guide Youssef helped us mount the sitting animals.

While sand began to whirl in the form of mini-dust devils, the cameleers tied scarves around our head, nose and mouth to shield our faces from stinging pieces of sediment.

On command, with a series of vertical jerks, the camels rose in unison to a standing position.

Row of camel riders in Morocco, photo by Kim Welsh 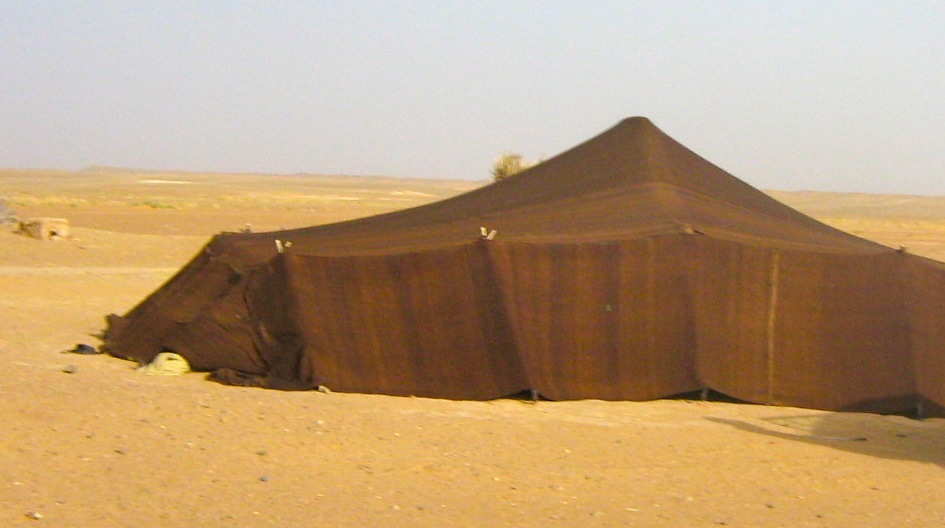 As we began our trek, we settled comfortably into the long and fluid gait of the “ship of the desert.” Magnifying the history and immensity of our surroundings, an international yellow directional sign depicting a camel read, “Timbuktu 52 Days.”

In queues of six to ten, we headed toward the distant ridges. I marveled at this stark universe of endless reddish silt: sandbanks formed when shifting winds lifted bits of soil and sculpted them into moderately angled mounds peaking on the windward side and sharply slanting on the leeward side. 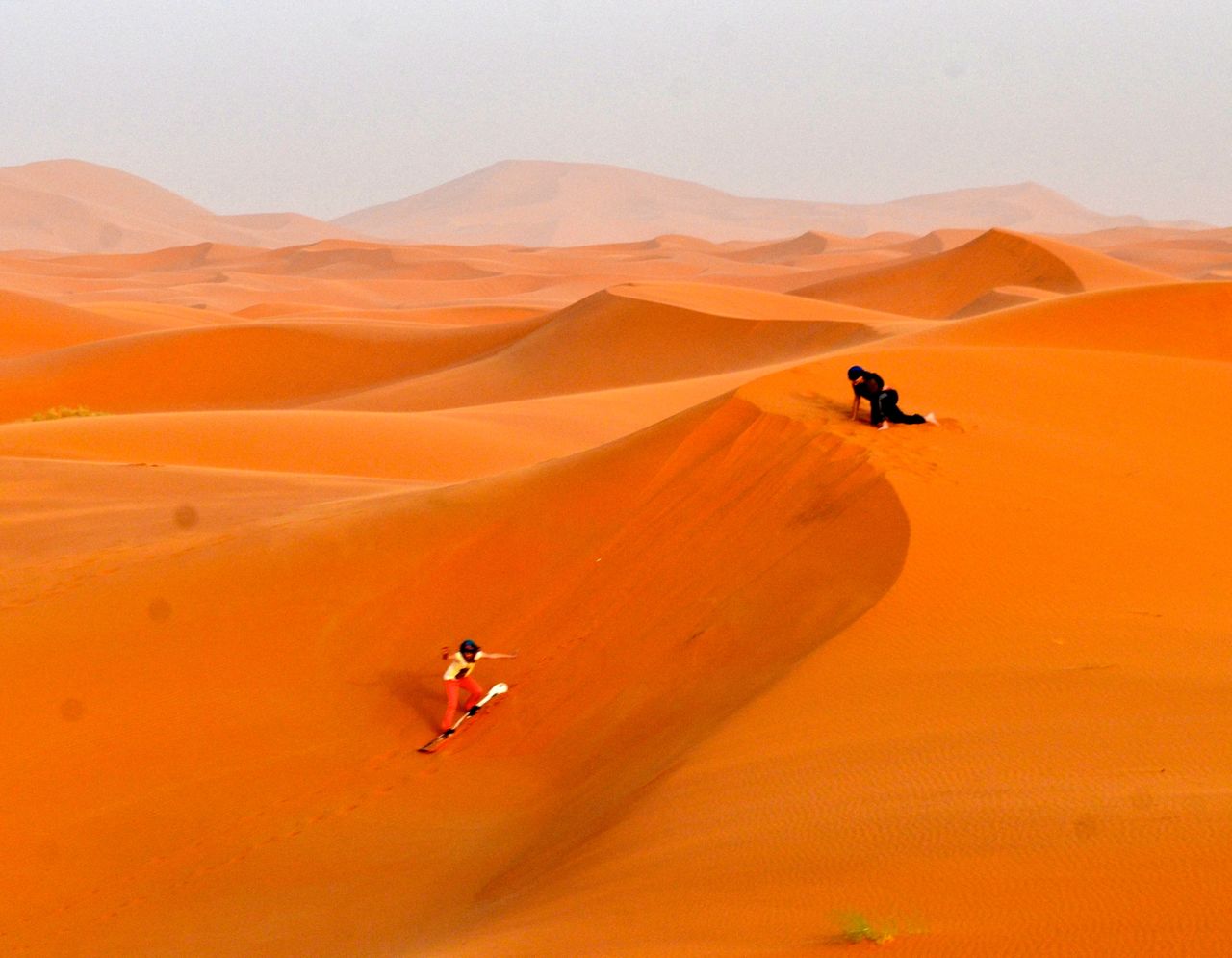 As we plodded single-file along the top of the ridges and down steep depressions, the south-easterly chergui breeze became more insistent.

After 45 minutes we stopped, the camels knelt, and we alighted awkwardly. Yousef dressed several riders, including me, in photo-ready traditional Berber Blue kaftans. 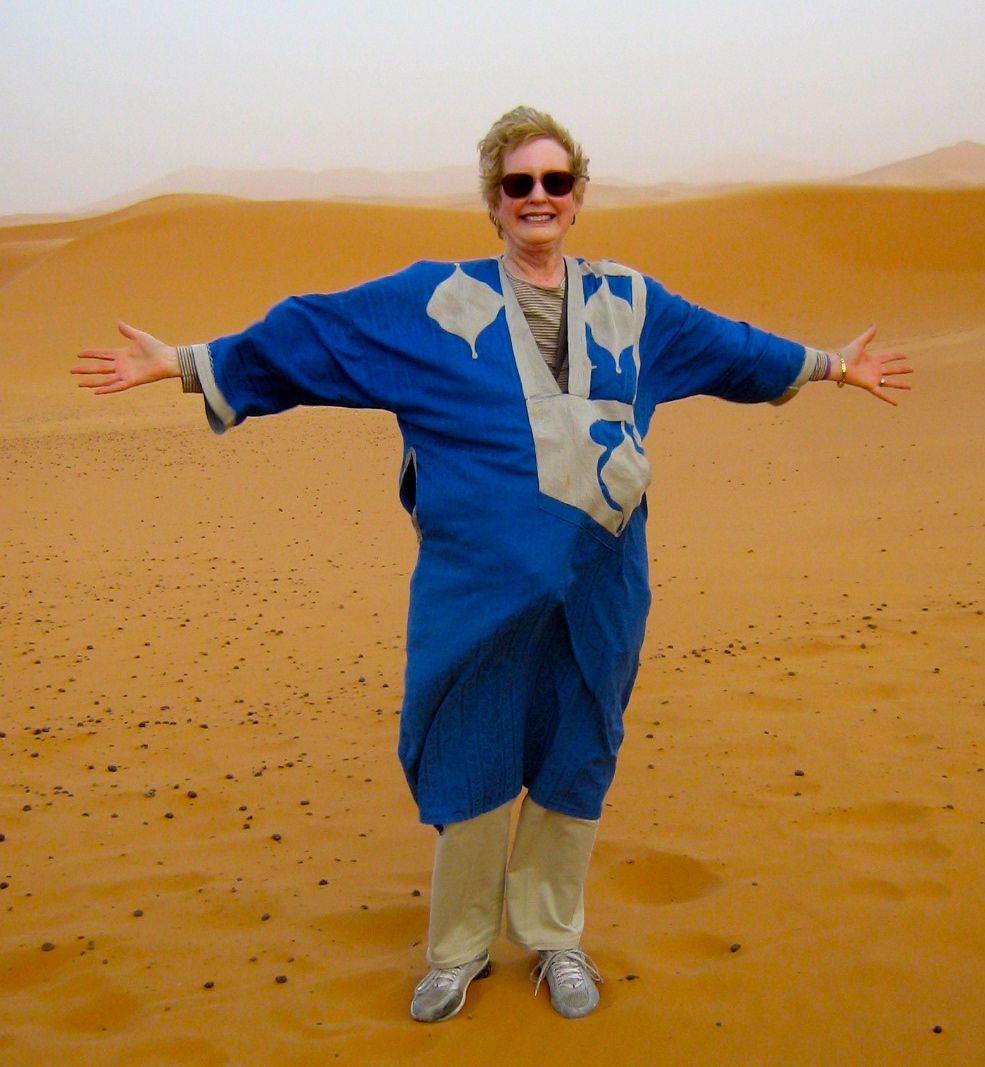 Cam in Morocco in Berber garb, photo by Kim Welsh

He then summoned us to the top of a steep dune to enjoy the vivid sunset as the sun edged the horizon.

Struggling to scramble up the 40-foot wall of sand was like scaling a huge mound of microscopic orange ice crystals, a slippery slope to be sure! 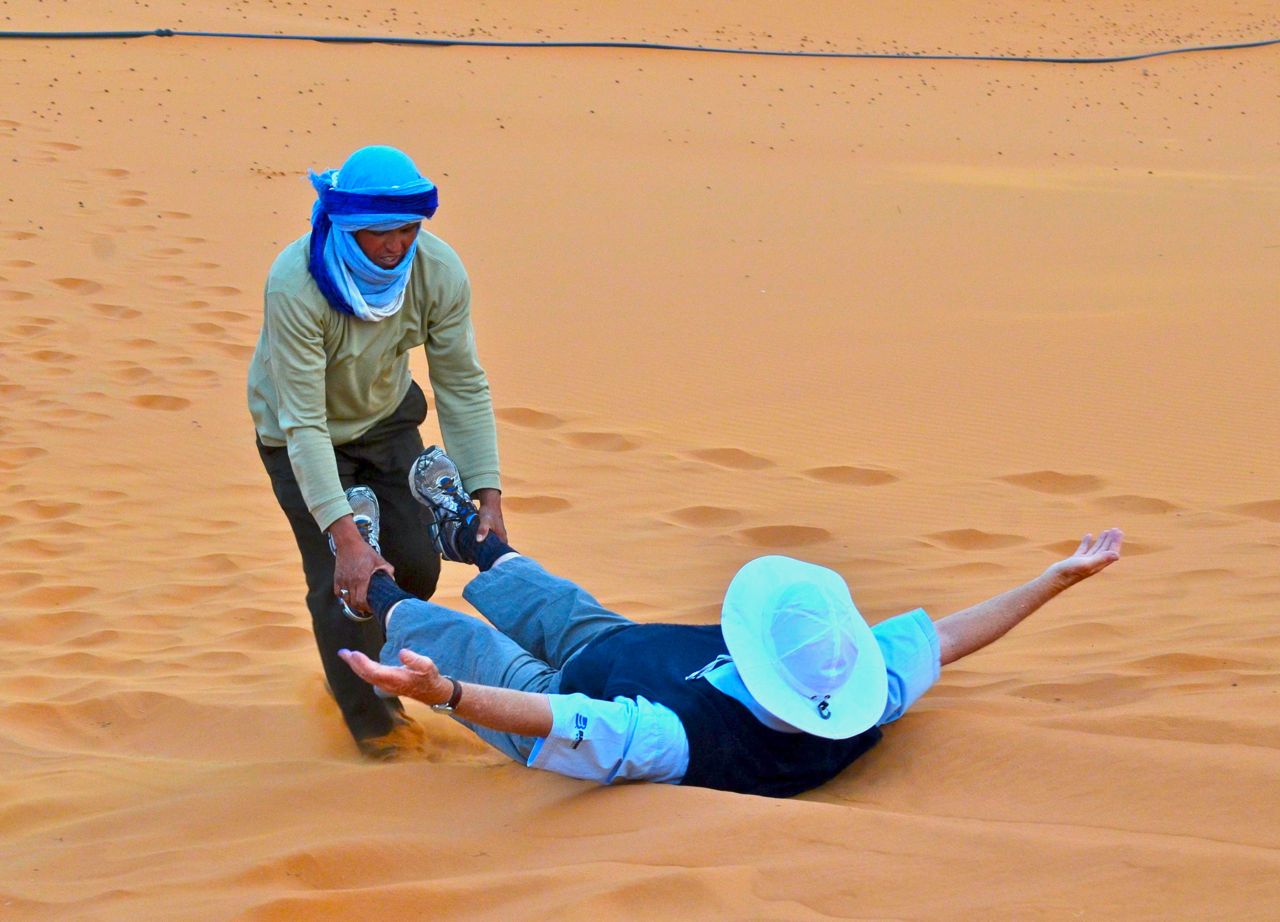 Cam being helped down the hill, photo by Kim Welsh

Lacking traction, most of us continually slid back down until the guides pulled stragglers up the incline. Finally all reached the top. We sat taking photos and admired the dramatic panorama. But frequently we had to turn away because the increased velocity of the wind beat sharp sand particles against our faces.

After the sun and roseate clouds slowly disappeared, we skidded back down the slope in a seated position, remounted our steeds and were guided by the wranglers back to the caravansary.

In the dusk, an inferno of grit engulfed us. The twilight became a sinister shroud. All buildings and nearby tents had vanished and the intense dirt-laden winds limited visibility to about six feet.

Fortunately I was wearing glasses for eye protection, but sand pooled on my turban and clothing.

By the time we reached the inn, the wind was howling incessantly and verging on gale force, and the temperature had cooled considerably. We were enveloped by an ugly griege drape of darkness. No reputed starry night that evening!

We dismounted quickly, tipped generously and profusely thanked Yousef. Then we gladly retreated to the shelter of our 4x4 to remove shoes and layers of clothing clumped with grime. We also discovered cameras malfunctioning and embedded with debris.

We all agreed that a few zephyrs and granular discomfort were worth the extraordinary experience of enjoying the Sahara and its topography at sunset from camelback, but the long drive back to the hotel was arduous. Only the vehicle’s headlights penetrated the moonless night. The pace was slow because the roads had disappeared, defining the phrase “middle of nowhere.”

When we asked Rachid how he could pinpoint the correct route through the wasteland back to Erfoud, he smiled, tapped his forehead and said, “Berber GPS.” 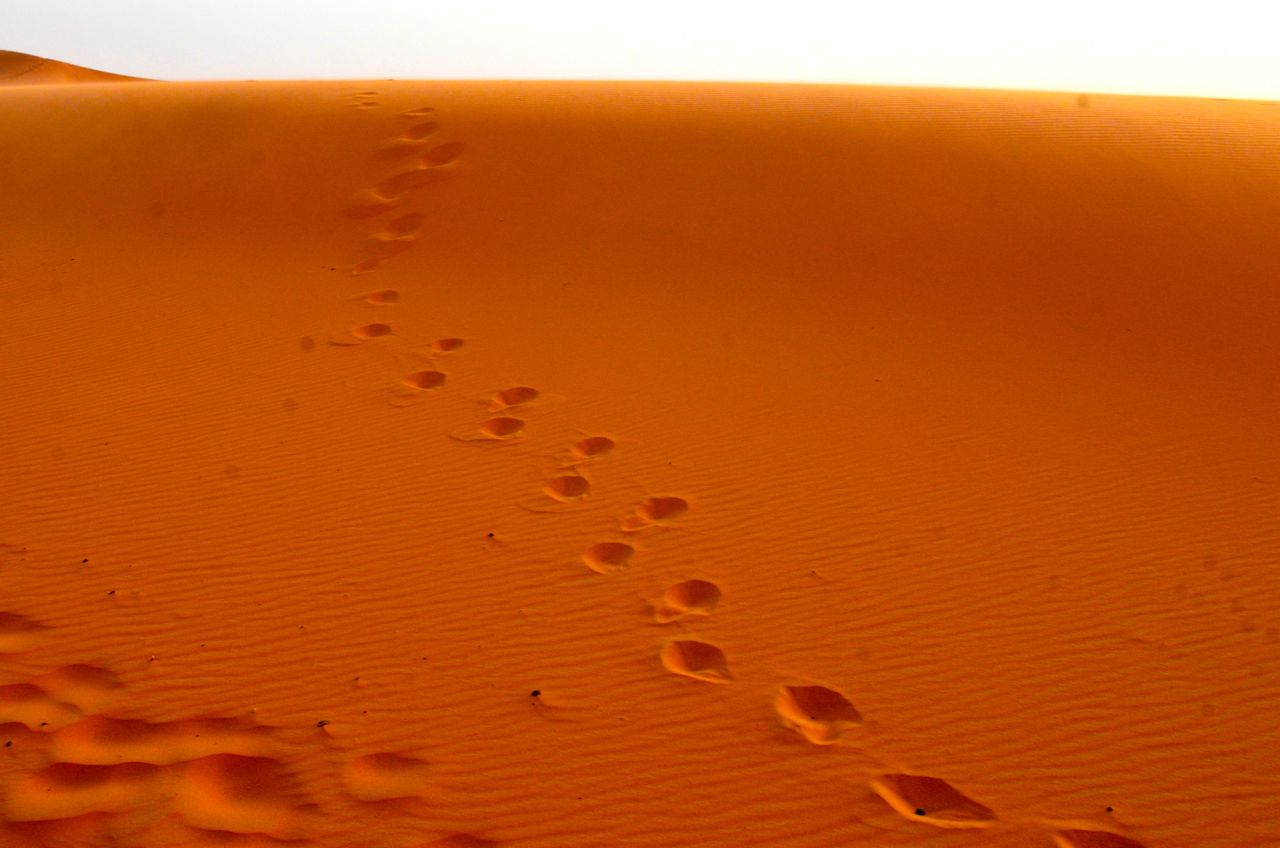 Camel footprints in the sand, photo by Kim Welsh

If you enjoyed this story by associate editor Cam Usher, please read Adrift in a Hot Air Balloon.