A lady’s civil war fan
discovered
in a military chest

When Pat Westcott, a licensed antiques appraiser - now retired - opened a captain’s military chest dating from the civil war, she had no idea of the historic adventure that awaited.

For 25 years Pat worked from her home base in Hightstown, East Winsor, New Jersey, scouting for and collecting antiques throughout New York, Pennsylvania, Ohio, and other southern states. 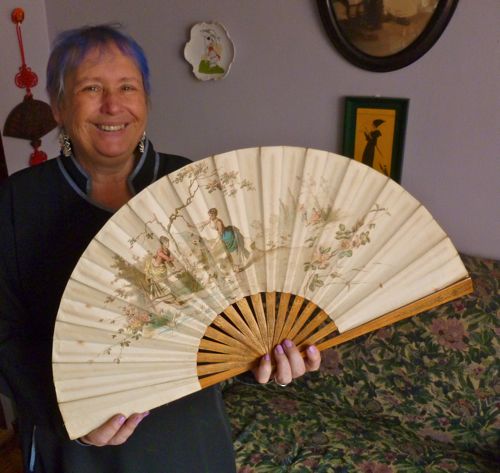 “I began collecting when I was 19,” she says. We’re sitting in her apartment, surrounded by what to others might seem a clutter of her personal treasures. But each picture, doily,  statue, hand mirror, lamp and cup has a story.

Pat is sharing with me the story of a very special civil war lady’s ball fan.

“I had quite a large ebay business. I was very often at the post office mailing packages, getting information on foreign deliveries and such and one day my postal worker told me, ‘We’re moving to North Carolina, and there’s a chest that’s been in my husband’s family since the civil war ended.’”

The woman told her it hadn’t been opened since the 1930’s, and she thought, since they were moving, it was time to “see what was left of it” and find out the value of the items inside. 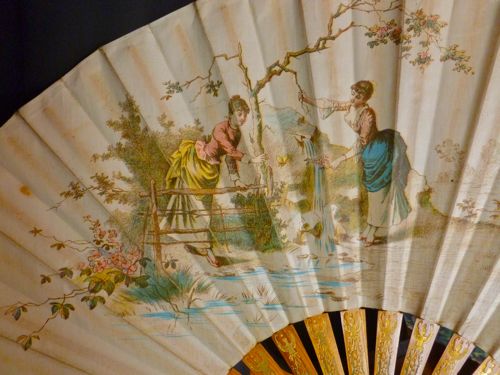 From the excitement in her voice, I can tell Pat is delighted to share this story. “She came to my house and brought this magnificent oak military chest. The chest had been kept in wonderful condition. The oak wasn’t eaten or bored through or chipped. It was like it had been issued yesterday. It was a beautiful campaign chest.”

The chest had belonged to the woman’s husband’s family. Papers inside identified this particular man’s property. “I don’t remember his name,” Pat says, “but I think he was a Captain, because really that was the only person who would carry a military chest. He was with the union army.”

In the chest Pat and the woman found clothing for women, men and children from the Civil war period. “There was a woman’s walking suit made out of silk taffeta, and capes and stoles made out of seal,” Pat says. She describes the military chest as “about three feet long and about three feet high.”

“There were women’s mourning bonnets. One of them was sable with satin ribbons and a satin interior. Perfect, like it was made yesterday. Handbags, children’s bonnets, widow’s weeds―you know, the black crepe stuff.

There were men’s pants, beautiful socks that had been hand-knitted, and women’s kid gloves with beading and embroidery on them. Except for the woman’s walking suit, which had seen a lot of wear and had some damage to it, everything was like it had been made yesterday.”

“Seems odd. How do you think these things came to be in a military chest?” I asked.

“I guess when he came home with the empty trunk, or with just his bits and pieces, the family decided to use it as a storage trunk.”

But the big surprise for Pat and her friend was found at the bottom of the chest.

“We just kept pulling stuff out, and when we get to the bottom, there was a blue velvet box. We took the box out, and I said, ‘It’s your trunk, so you open the box.’

It turned out to contain a pair of sterling silver and ivory-handled straight razors with a man’s name on them, maker’s marks, mint marks―perfect in the presentation case, never been used.”

Family legend was that the man died in 1865, shortly after coming back from the war. There was very little information about him. The name on the straight razors wasn’t his.

Pat explains: “He might have received them as a gift for somebody and had the man’s name inscribed on them. But they were absolutely gorgeous and I knew immediately that I could sell them for a lot of money. Real silver, not steel, and ivory, not celluloid, a gentleman’s razor set.”

To Pat’s chagrin, the blue velvet box with the razor set was the one item the family wanted to keep. She said, “Are you sure?” Two days later she came back to them and said, “I have somebody right here willing to pay you $2,000 for those razors. You won’t get a better price.” No, her friend said they planned to keep them.

Pat was able to sell everything else for her. “I gave some pieces to museums. Some of the more beautiful pieces―evening capes beaded with jet beads―I sold some of them to costume companies.

One went to a civil war group based up in our area, they wanted the children’s mourning clothes...okay, why?” Pat laughs. “You see, it was the whole cult of death at that time...once Queen Victoria started wearing black, everybody followed. So it was this ongoing historic thing.”

She says they made sure everything found “good homes.” When the trunk was empty she returned it to the family.

A few days before they moved to North Carolina, her friend came by and said, “Here’s your fee, thank you very much, and we really want to give you something to remember your adventure by.”

Pat smiles at the memory. “And she pulls out an Irish linen fan dating from the civil war―I’m having a shadow box made for it―it’s enormous, what they called a ‘ball fan.’ The whole thing was about 18 to 20” when it’s open. It had been used, so I’m going to preserve it in a shadow box.”

Pat offers to show it to me. I think she’s happy that I’m excited to see it. She rises from her rocking chair and disappears into her bedroom. When she returns, she carries the fan in its open position so I can fully appreciate the charm of it. 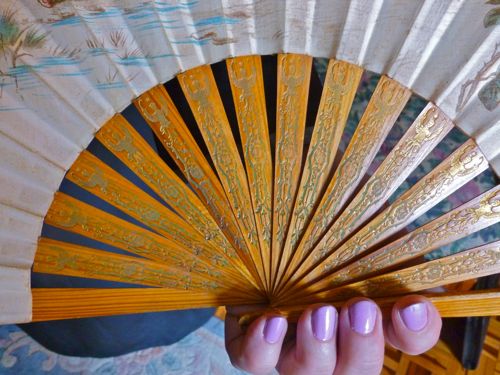 “You would bring this to a ball,” she says, “You would wear it on a ribbon on your wrist and you would just snap it open.”

Seated once again, Pat adds, “It was an education for me, I was able to do a formal appraisal, she got her money’s worth, I got a beautiful fan, and I had the chance to handle some historic clothing. I love doing stuff like that. I’ve been able to climb the inside of barns, attics....” and she goes on to reminisce fondly about her 25-year adventure as an antiques appraiser.