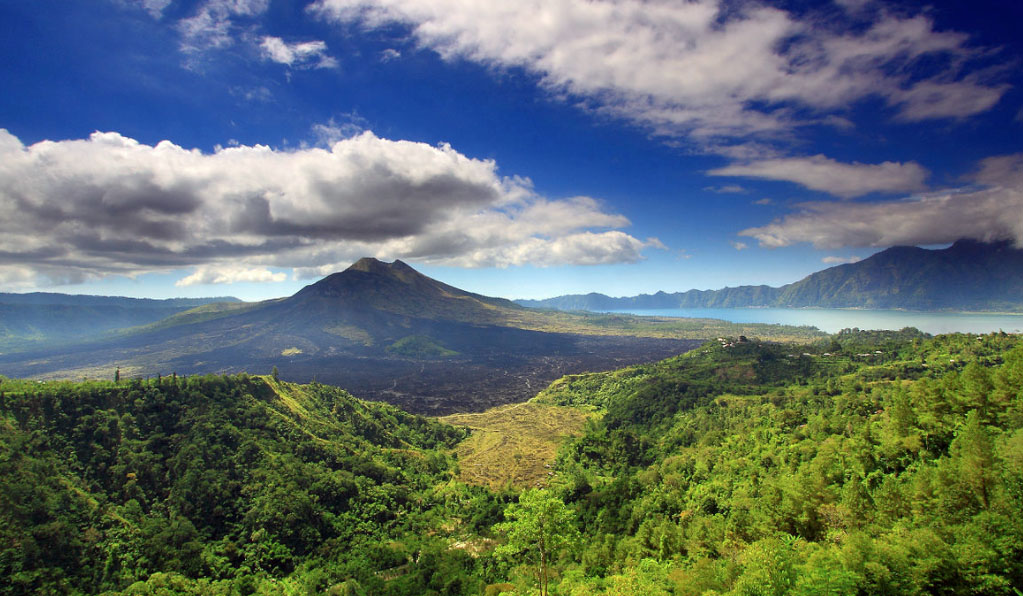 The Indonesian island of Bali offers a vast array of adventures and delights for travellers. The guide books seemed to agree the starlit trek up Mounr Batur, also referred to as Gnung Batur, was definitively an “otherworldly” experience. But what did that really mean?

I imagined magical landscapes, energy not necessarily human, moving out of the ordinary and between worlds like Wonder Woman.

Hindu people consider Mount Batur one of Bali’s sacred mountains, home of many Gods and the site of sacred rites and festivals. Considering that there had to be something out of the ordinary and divine about a spot on the planet imbued with zillions of prayers, devotion, and worship, I wanted to get some of that on me.

I snoozed through the hour and half drive from Ubud to get to the base of Mount Batur. Now at 3:00 AM, heavy darkness prevailed. After a cup of hot tea at the trailhead, my young guide, Komang, flashlight in hand, beckoned me forward into the silent whisper of the night jungle.

Excited and apprehensive, I took my first steps, pondering if I could do what has been described as “a challenging witching hour pre-dawn trek”, to experience sunrise at the summit of an ancient active volcano.

I asked myself, why am I doing this? 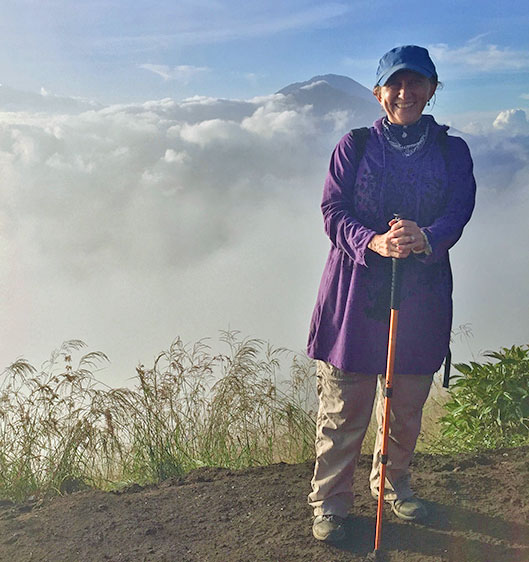 Mount Batur, in central Bali, is 5,633 feet (1,717 meters), looming up from Batur Village, in the Kintamani District.

It is what volcanologists call a “double caldera” – one crater inside another. Regular volcanic activity occurs, with major eruptions in 1917, 1926 and 1966.

Though a major eruption was highly unlikely, still I experienced the percolating inner tension that this volcano could actually erupt. Molten, explosive, unpredictable energy underfoot felt like part of the adventure.

Equally important to my hike’s description was “challenging”, defined by the Cambridge dictionary as: “something needing great mental or physical effort in order to be done successfully or the situation of facing this kind of effort.”

What if the result of the physical challenge was the otherworldly experience? In retrospect I think I was searching for some sense of transcendence, something spiritual, or even mystical.

In search of this otherworldly adventure at 63 years old, climbing Mount Batur meant I had to fight the grueling physical and mental dragons of ascending 2.5 miles, 2,500 feet in less then three hours, in the dark, headlamp flickering, on very steep crumbling rock trails and slippery volcanic lava paths.

Komang’s encouragement, patience, and good nature made me feel safe and spirited. I knew climbing Mount Batur wasn’t going to be a cakewalk but I had no idea it would rate as “epic”.

The first part was a shallow incline and the path didn’t seem so bad. It was narrow with lots of guided groups, all ages, builds and sizes, moving single file, creating a caterpillar line of flashlights on the night trail and a steady stream of silhouettes under a canopy of green, tangled jungle foliage. In the beginning several paths converge into one.

Though the path is well defined in the light of day, not so in the dark with only a flashlight, totally supporting the need for our guides.

On the second half of the hike, which became a much steeper intense ascent, the dragons of effort roared and manifestations of a “great” challenge were unleashed.  Though the pre-dawn air was cool, everything was heating up mentally and physically.

The jungle fell away, the stars felt very close and in a still very dark night, loose volcanic sand and slippery lava rocks began to define the trail as well as a startlingly steep incline.

Quite naturally my hand found its way into Komang’s hand. I was his charge and he wanted to make me feel as safe as possible.

There was no room for me to be proud. With the help of a trekking pole in one hand and holding Komang’s hand I could steady myself and get ready for the next demanding step, hoisting myself up the giant lava rocks.

Several times I faltered and slipped dangerously on mud, shale and unpredictable black lava. Komang was there to catch me by the arm. 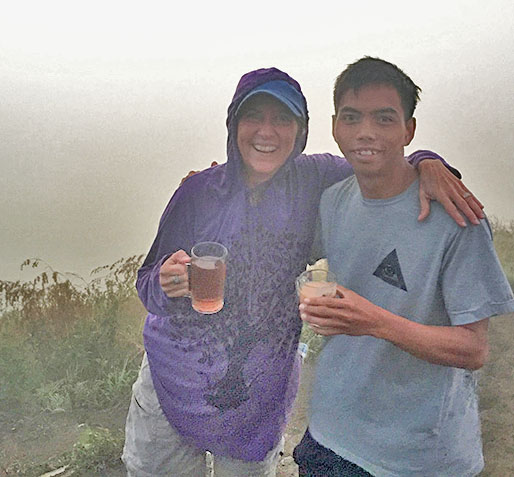 Not being part of a group, with Komang as my personal guide, I wondered what if he had not been there to catch me? Sweetness of all sweetness—he begins to call me “Mother”, a Balinese term of honor and respect for an older woman.

As the extreme exertion screamed in my body, rivers of sweat began to trickle down my back. My thighs were being painfully whipped into high gear usage. My sometime bad knee, though braced, threatened pain. My heart beat frantically fast, pounding out of my chest and in my temples.

I was getting really tired. Behind me, the line of ascending hikers was ceaseless. Again, there is no room to be proud.

My mantra “Slowly, Slowly” resonated between whining thoughts of, “Are we there yet?” and OMG this is so difficult, uncomfortable and totally impossible! 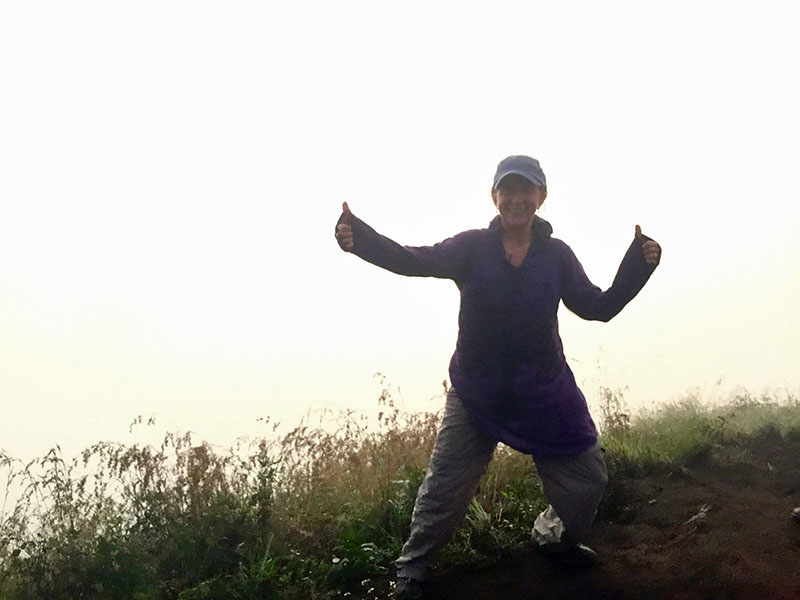 With plenty of rest stops, water, and moments of sweaty exhaustion, the incessant demanding effort and focus paid off. Passing the first steaming crater, I arrived on top of Mount Batur.

I imagined how long ago it had erupted out of the Indian Ocean. Now mist, volcanic gases, atmospheric winds and my exhilaration of having met the challenge cloaked its summit.

My hoodie helped to assuage the cold winds, and I found another cup of hot tea in my hand. Komang, in the soupy vaporous dawn, guided me to get up close and personal with the volcano’s crater by finding a volcanic steam hole called a fumarole.

He had brought a banana and a couple of eggs and with sulfurous gasses rising, he showed me how to place the eggs and banana inside to cook for 20 minutes.

The folks back home will never believe I cooked my breakfast in a volcanic steam hole in Bali! 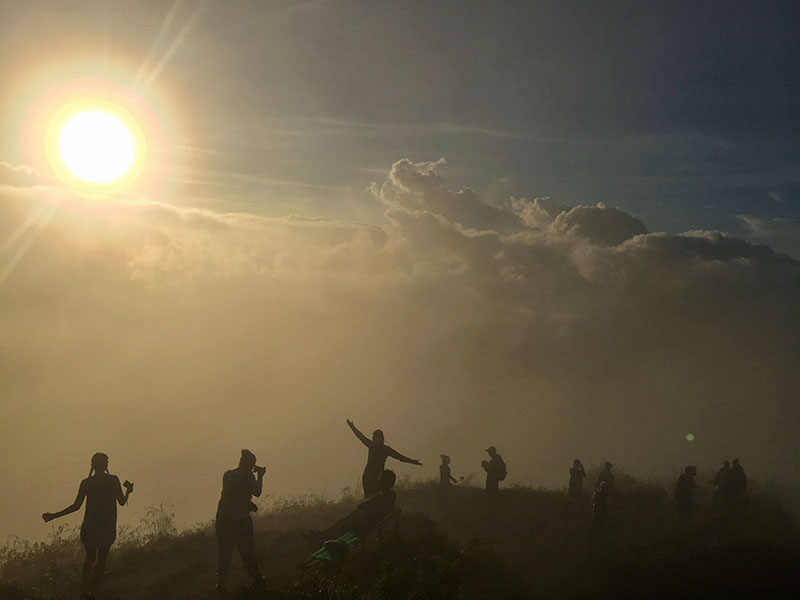 The sky slowly shifted from black to deep blue to pink to orange. Passing through a veil of silver-lined clouds, the sun emerged as a brilliant gold orb from below us, as if rising to kiss my effort and make me want to dance! Cameras click!

I photographed majestic views of Lake Batur and verdant valleys below. 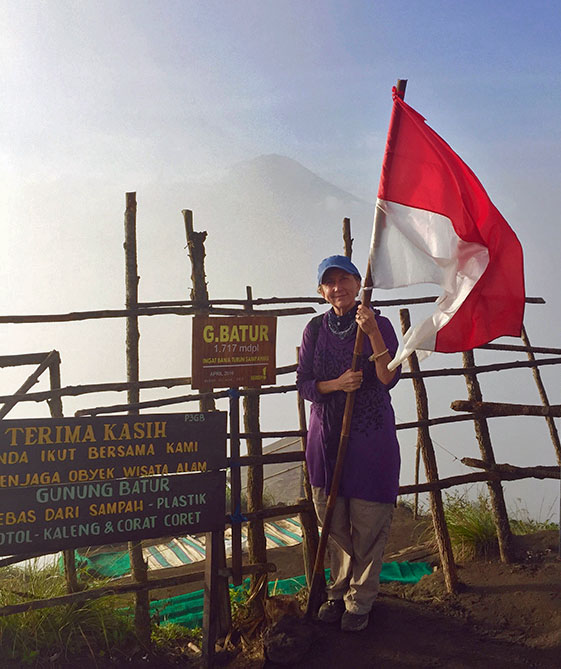 Then, a wondrous wonder occurred! A very rare and delightfully magical spherical rainbow called a Brocken Specter* appeared. It cast my shadow on the rising volcanic mist making it appear ten stories high smack dab in the middle. All the atmospheric conditions were right to make this a once in a lifetime transcendent moment.

Komang had no interest in the scientific explanation—he attributed it to the mystery and sacredness of the mountain.

“The Gods are blessing you, Mother,” he said.

Indeed, that is how I felt.

With the sun well into the blue morning sky we began the far less challenging descent down the other side of the volcano and enjoyed a great view of the second steaming caldera. 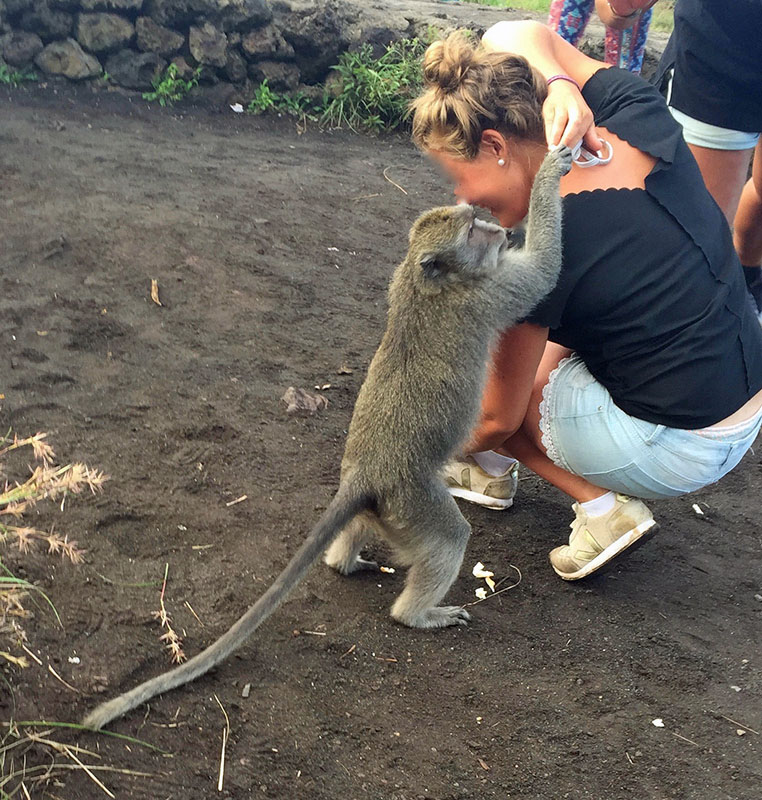 Along the way we encountered a group of friendly gray macaque monkeys. These Old World monkeys have adapted themselves to different habitats around the world, and According to National Geographic, they have the widest geographic range of any primate apart from humans. In Bali they’re know as the Balinese long-tailed monkey, and are also found in temples and in their own Ubud Monkey Forest. 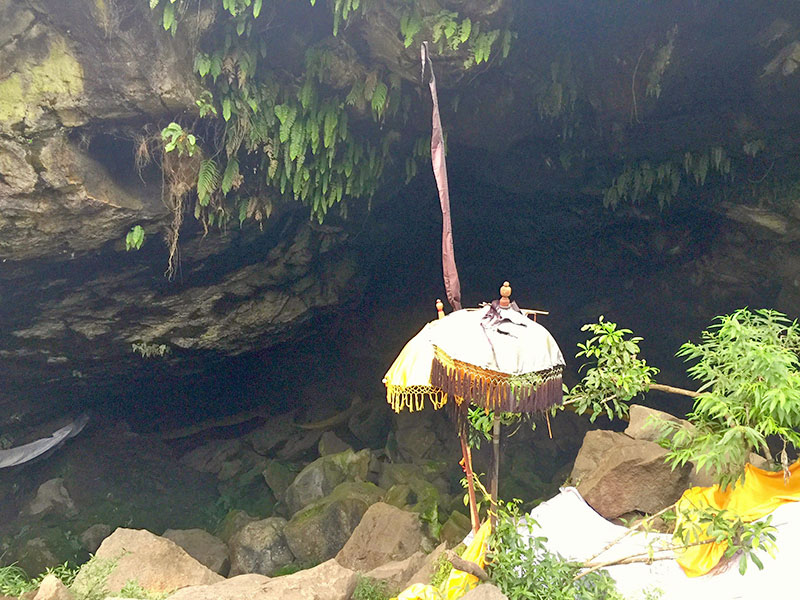 The sacred grotto and bat cave could be easily missed at this point but Komang took me down a little unmarked trail to reach it. I was deeply moved as he explained Balinese ceremonies which take place here and the essence of many of their spiritual beliefs.

In Bali - Sekala and Niskala Essays on Society, Tradition, and Craft, author Fred Eiseman explains the nature and purpose of these ceremonies,... Hindu-Balinese philosophy conceives of the universe, and all within it, as an equilibrium between good and bad forces.

Neither can be eliminated, but ugly things can occur when nothing is done to maintain balance so that the negative forces get the upper hand. Religious ceremonies maintain the balance.

The lovely offerings you see are for the positive forces, but just as much effort and attention is given to their negative counterparts, though this is not apparent to the casual visitor. 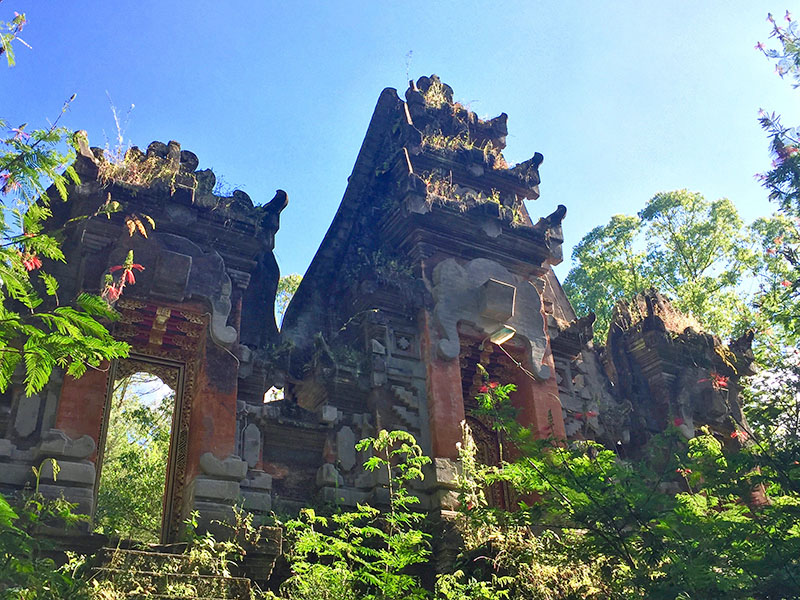 We rested at an ancient crumbling temple, slowly being reclaimed by the jungle. 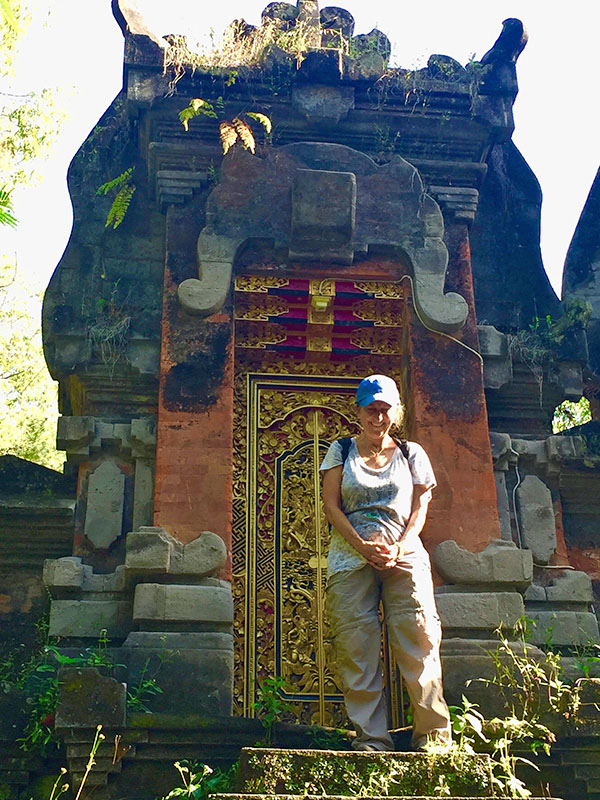 Nearing the trailhead, I felt strong, blessed and wildly expansive.

Komang asked if we could be friends on Facebook and beamed, “Good job, Mother!” Accepting his friendship, I took a moment to honor the effort, strength and determination it took to experience the “otherworldly.” I felt like Wonder Woman!

***Also called a Brocken bow or mountain specter so named because of sightings in Brocken, the highest mountain in Germany’s Harz Mountains. It can only be seen when specific weather conditions are met.

According to Wikipedia it “is the apparently enormous and magnified shadow of an observer, cast upon the upper surfaces of clouds opposite the sun. The head of the figure is often surrounded by the glowing halo-like rings of a glory ring (an optical phenomenon resembling an iconic saint’s halo) of rainbow colored light that appear directly opposite the sun when sunlight meets the cloud of uniformly-sized water droplets…because the peak is above the cloud level, the area’s frequently misty conditions…” (In Mount Batur’s case, volcanic steam and gases) “…are conducive to casting a shadow on a cloud layer.”

This phenomenon, called diffraction, causes the circular rainbow-like bands around the shadowy figure in the center, could easily be mistaken for a ghost if one were of that mindset. If you see this amazing rainbow around you I guarantee it is a once in a lifetime OMG moment. My Balinese friends had no interest in the scientific explanation as they attributed it to the mystery and sacredness of the mountain.

Climbing Bali’s volcanic Mount Batur taught me there might be something to what they say. 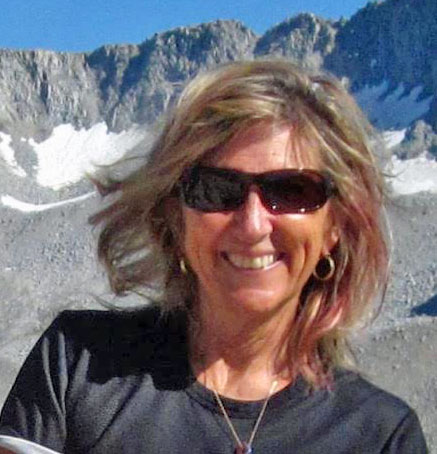 Paula’s home is tucked deep in the woods of the  California Sierra Nevada Foothill’s “The Gold Country”. Her two-prong career Includes being an adjunct Professor of Psychology at Sacramento City College and an Expressive Arts Therapist facilitating groups for those on a healing journey with cancer at the Sutter Cancer Center in Sacramento CA. As retirement looms she looks forward to being a full-time adventuress! 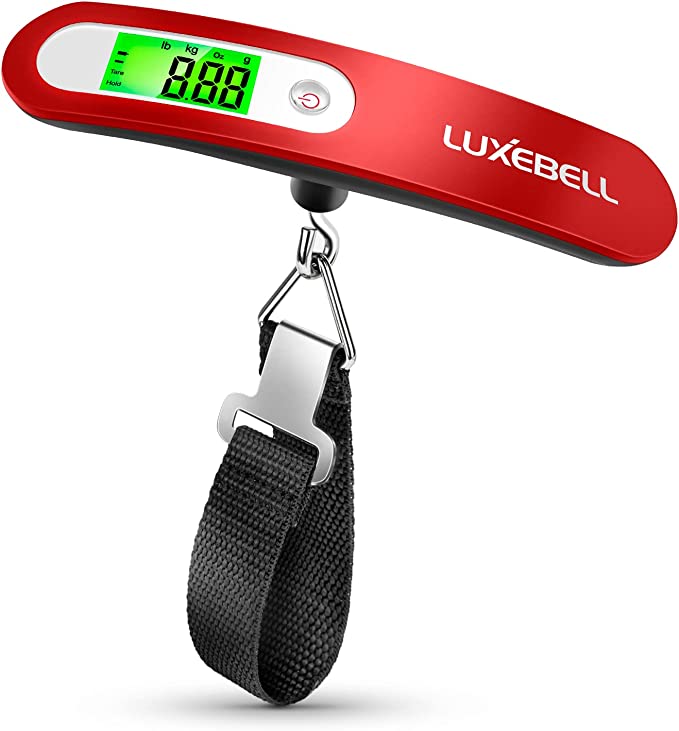 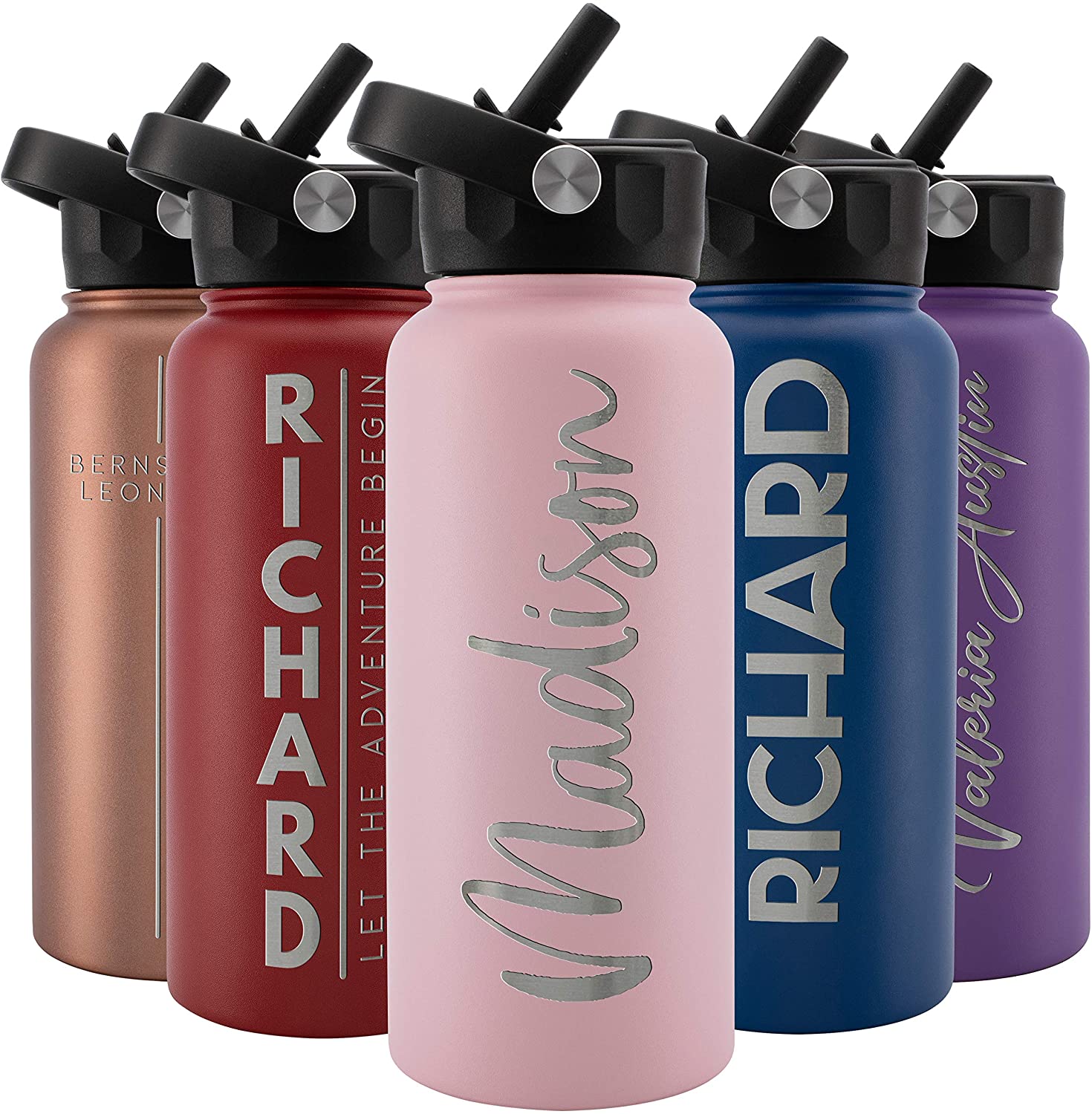