Spiders were an ever present danger to a number of our safari group, to the extent that they’d rather lose a leopard we were tracking than drive through the web of a golden orb weaver.  Other members of the group designated one of our four Range Rovers “the bug car,” devoting significant time to examining insect and reptile life under rocks and logs. 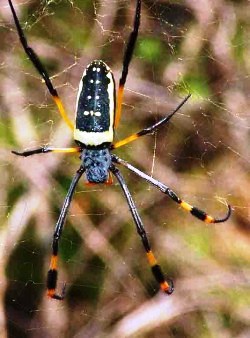 The golden silk orb weaver spider spins its web between two trees or shrubs, seemingly every two trees or shrubs in the bush. So plowing through its webs was unavoidable on our off-road hunts. Our vehicles, lacking windshields, had only an antenna, and our faces, to break the webs.

The screams and wails of the fearful ones were a contrast to their calm excitement five feet from hungry lions, a yard from a hunting leopard. One of the arachnophobes easily handled a six-inch millipede and tasted a fried grub. I guess for some, spiders are just directly hot-wired to the ick response, and no logic applies.

The golden orb spider is a large, striking arachnid that spins an impressive web of strong yellow silk. Its main bridge line can span 30 or more feet and feels like fishing line. 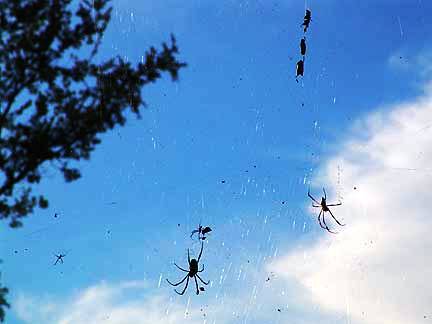 African kids wrap and roll it into yellow rope bracelets. 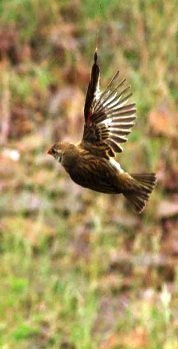 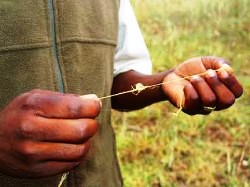 The web is so strong and sticky that fishermen use it to make nets. They bend a branch into a teardrop shape and wave it back and forth through the golden orb weaver’s web.

Despite those who scream eek, we drove through hundreds of webs. Only a few spiders got into the vehicle. None clamped onto anyone’s face. None climbed into anyone’s shirt.

Instead, most of the victimized spiders ran into the shrubs at one end of their bridge lines. They would then eat the silk of their ruined webs and within hours spin new ones with recycled material.

--Story and photos by Bambi Vincent

She says her furniture lives in Las Vegas, Nevada. She is the author of Travel Advisory: How to Avoid Thefts, Cons & Street Scams While Traveling Copyright©2009 Bambi Vincent. All rights reserved. Used by permission.