Read about being adrift in hot air balloon rides over Turkey, written by Cam Usher.

Somehow I never imagined myself in a hot-air balloon adrift over central Turkey.

My acrophobia is such that I avoid Ferris wheels, rooftop restaurants, glass elevators and window seats on airplanes.

When my husband suggested a hot air balloon ride while we toured the Cappadocia region of Central Turkey, my lack of enthusiasm was boundless. The 5:30 a.m. meet time was almost a deal breaker as well. 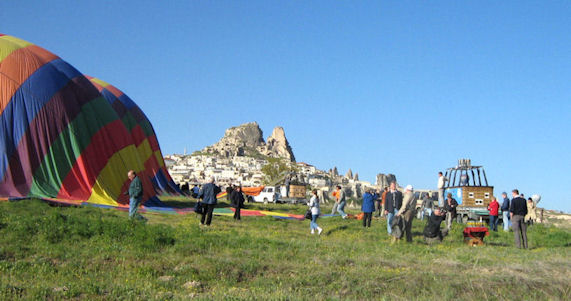 But I was game for this new adventure in a hot air balloon and the chance to see the area’s pre-historic and oddly named “fairy chimneys” from the air, while possibly putting this dislike of high places to rest.

Also, I wanted to show my husband that I wasn’t a wuss. 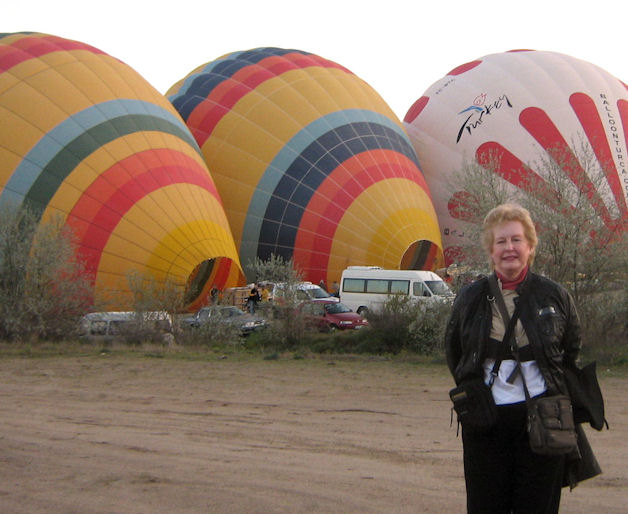 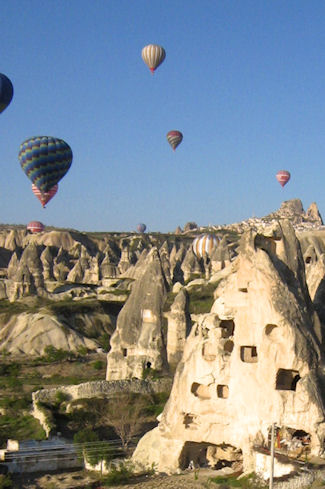 As we drove 30 minutes from the Stedeman Hotel to the hillside town of Goreme where the balloons launch, I was struck by the miles of peculiar geologic shapes creating a harsh lunar scape of jagged pillars, tall cones, pyramids, dunes and mushroom caps.

These “fairy chimneys,” an earthy spectrum from tobacco and taupe to ochre, rose and cream, are tall sandstone formations created over many centuries by wind and water erosion of the soft detritus from ancient volcanoes.

In another millennium, the interiors of these imposing porous tufa rocks were hewn by religious sects and nomadic tribes for sanctuaries.

Later they were inhabited by shepherds and agrarians and over time provided housing for families.

In 1965 the Turkish government outlawed these residences so the dwellers built homesteads adjoining the chimneys.

Today the ancient and modern juxtapose with automobiles and all terrain vehicles parked in the base of the chimneys.

Historically this area was traversed by Hittites and Ionians; the patriarch Abraham; caravans from east and west on the Silk Road; Alexander the Great; Saints John, Paul, Basil and Peter; Roman legions; disciples of Mohammed; Byzantines and Crusaders; and finally the Ottomans. 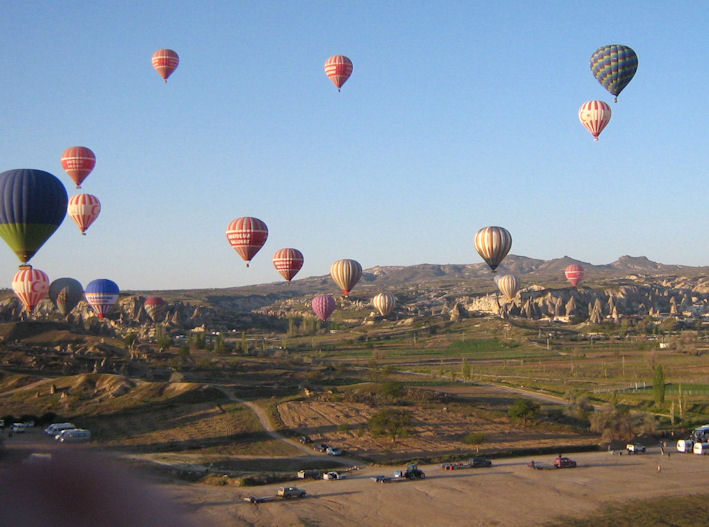 The huge fleet of supine balloons was inflated with hot air supplied by propane fired burners and large fans. We drank robust Turkish coffee in the chill spring air while nearby roosters raucously welcomed the morning.

When our multi-checked aircraft was ready to go, our group of 16 passengers clambered awkwardly up the ladders,  and shoe-horned themselves into the four sections of the wicker passenger gondola - apparently more substantial than it looked.

With a slow and graceful ascent to more than 700 feet, we were floating over the beige Anatolian plateau by 7:30 a.m. Accompanying us were 30 more balloons suspended like vivid Christmas ornaments against a still and cloudless turquoise sky.

I scanned the horizon over the gondola’s edge, anxiously waiting for the tremors in my stomach to subside. But these hot air balloon rides were as smooth as silk, and I was able to relax and enjoy the experience! 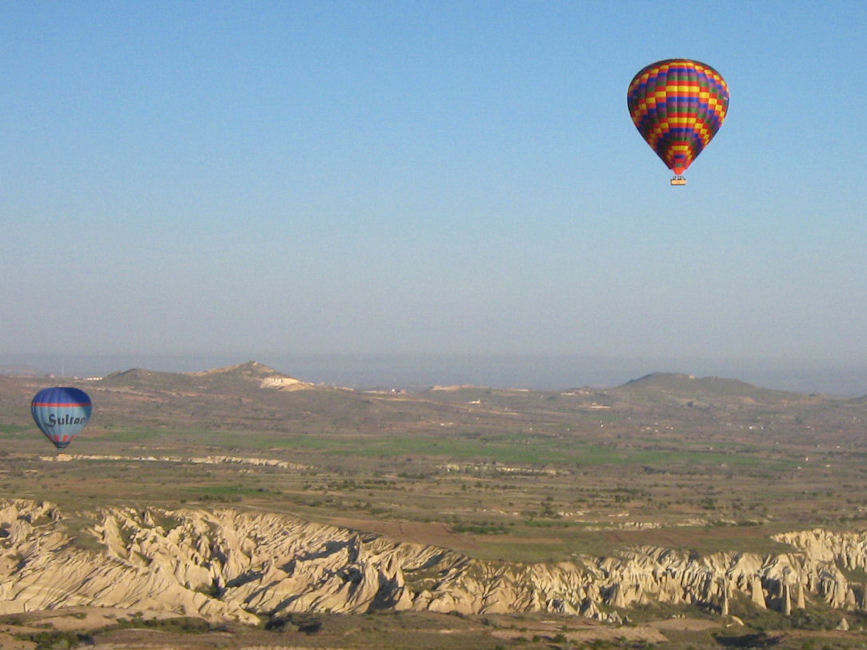 I could appreciate the spectacular landscape as well as the silence and tranquility aloft. The only sound was the occasional whoosh of hot air as the balloon shimmied up or down. We glided over an orchard, and the scent of almonds arose, a quaff of Amaretto on high.

The high altitude carriage was versatile with our handsome Belgium pilot Geert (Jim) Van Wolvelaer increasing and decreasing elevation so we could ride the air currents, the better to distinguish the irregular terrain and variety of chimney shapes.

We floated over dry river beds, caves, vineyards, minarets, and the slopes of Goreme, low range mountains and snow-capped Mount Erciyes (12,851 feet) far to the north. Jim commented on all the points of interest as we slowly drifted overhead.

The higher we went, the colder the air so my sweater and jacket, neck scarf, gloves, hat and dark glasses were most welcome. Picture taking was problematic with my gloves reducing my hand dexterity. Since the basket had no seats, we stood compressed against other passengers.

After almost 70 minutes without gravity, Captain Jim made a virtuoso landing, gently lowering us and positioning our balloon gondola directly onto the trailer which would take it back to its port.

We disembarked most gracelessly, and then enjoyed the traditional post trip celebration with champagne toasts to our pilot, our companions and ourselves.

For our hot air balloon rides, we received photos and certificates from Captain Jim.

Full Disclosure - I couldn’t look down over the chest-high edge of the gondola without those internal quivers reminding me we were not earthbound, so my husband stood in front of me during our entire voyage aloft.

But I’d do it again.