In the middle of Nicaragua Lake in Central America is the island of Ometepe, a great place for the adventuress soul.

Two volcanoes, Concepción and Maderas, around which everything revolves, make up this island. Only about half of the island's roads are paved, so having this arranged ahead of time as part of a tour, or renting a motorcycle, like we did, is the best way to explore the island. 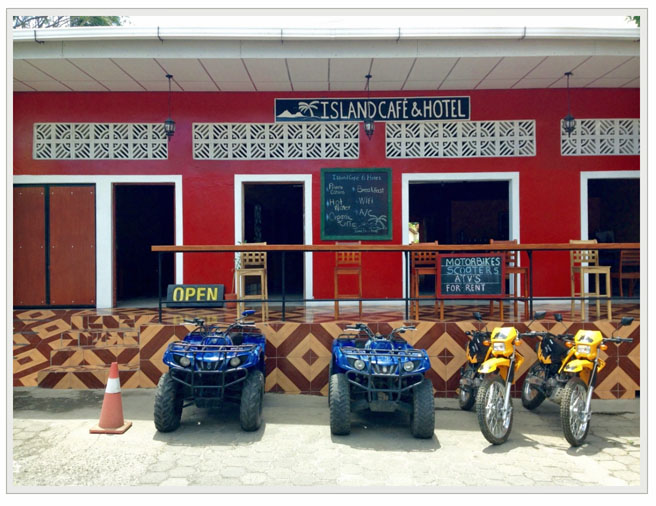 We stayed just off the dock at Island Cafe, which cost us around $25-28 USD per night for a large room. We rented a dirt bike from Robinson Espinoza, the owner of Island Café (robinson170884@gmail.com or call +(505) 8691-5044). Many accommodations offer scooters and motorcycles for reasonable rates—$20 for a scooter, $25 for a dirt bike.

We were able to drive around the whole island on our dirt bikes in one day. A bike on this island is so much fun and I highly recommend that you rent one. 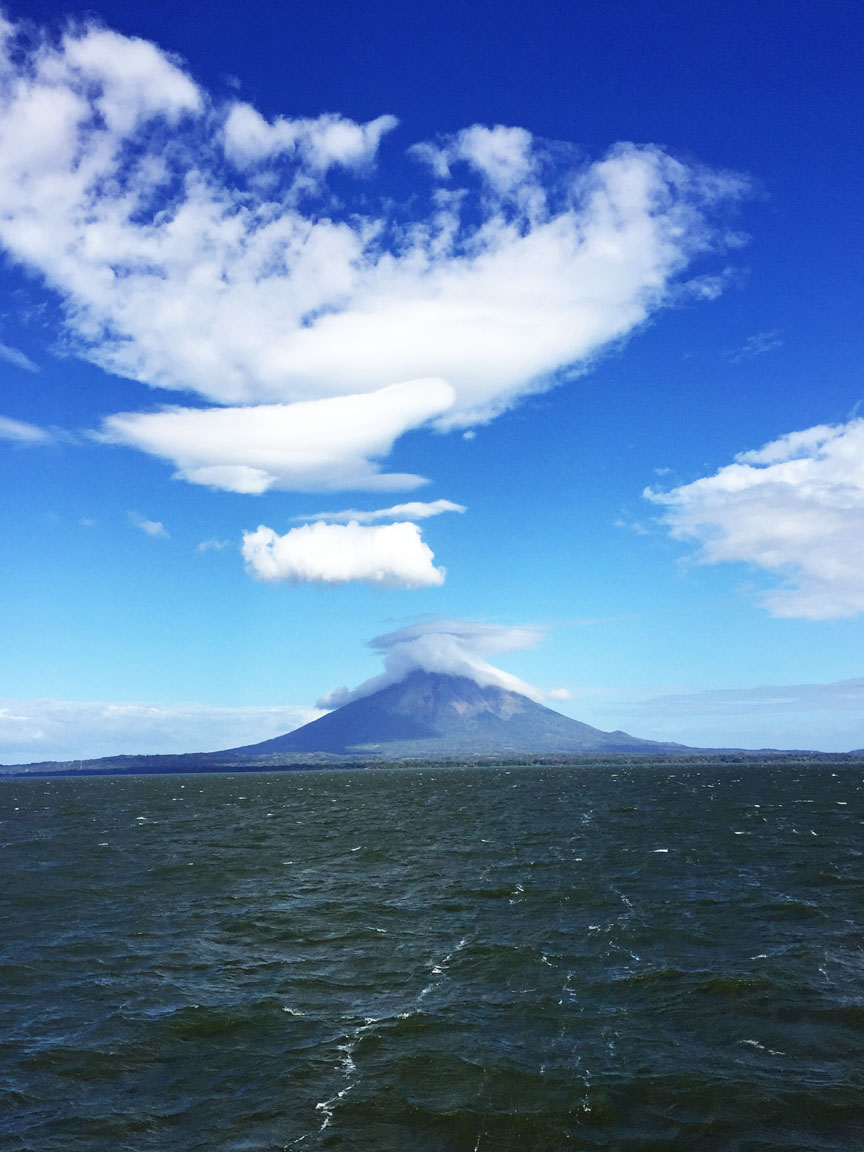 Volcán Concepción, which is still active, is the monster of the two, located on the north side of Isla de Ometepe

Adventure seekers from all over the world travel to Ometepe Island just to climb Volcán Concepción. There are numerous trails in the tropical forest that surrounds the volcano's ash-covered peak. The total hike time is around 8 hours round trip.

The day we hiked Volcán Conceptión, we hired a guide. At $15 USD per person with a guide, it is worth the cost for safety's sake.

Since 1883, Concepción has erupted at least 25 times; its last eruption was on March 9th, 2010. Concepción's eruptions are characterized by frequent, moderate-sized explosions. 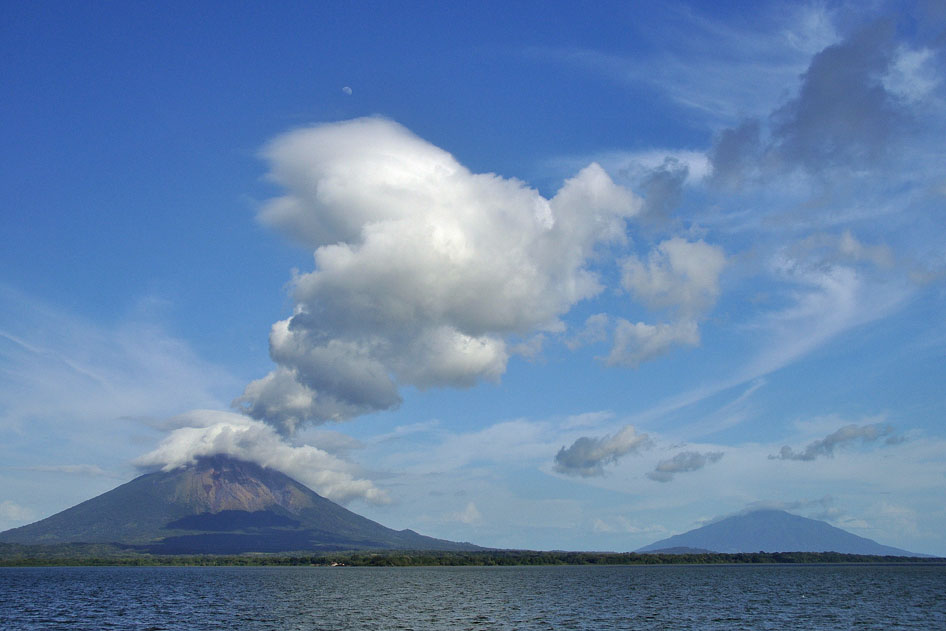 The day we hiked Volcán Conceptión, our alarms buzzed violently at 5:30am. We rolled out of bed with just enough time to throw together the day’s necessities–snacks, 2 liters of water for each of us, our phones for pictures, and sweaters in case of weather changes during our hike.

We were picked up in a tuk-tuk at 6 am and arrived at our destination shortly after. We paid a fee of $3 USD to enter the park. Our walk at the bottom consisted of passing through cows, horses, and chickens, and children walking to the main road to get to school. We stopped at the only place that offered coffee before we started our trek up the volcano.

Throughout the 8-hour climb, our guide demonstrated his uncanny ability to spot wildlife and fascinating plants that we would have never have noticed or recognized on our own. 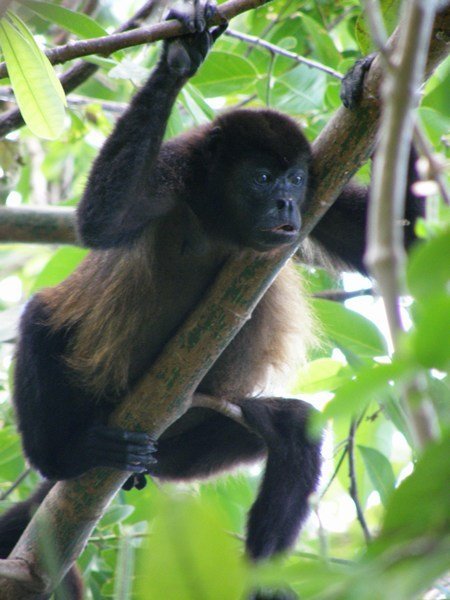 We saw a lot of howler monkeys and capuchin monkeys, and they became very active when they spotted us.

During the hike, for the most part, the weather gods were kind. The rain did come half way up the climb and in no time we started to find ourselves sticky from the humid air and the physical exertion.

The climb half way up was lush, very beautiful to see. Midway, we had a snack break and a rest. 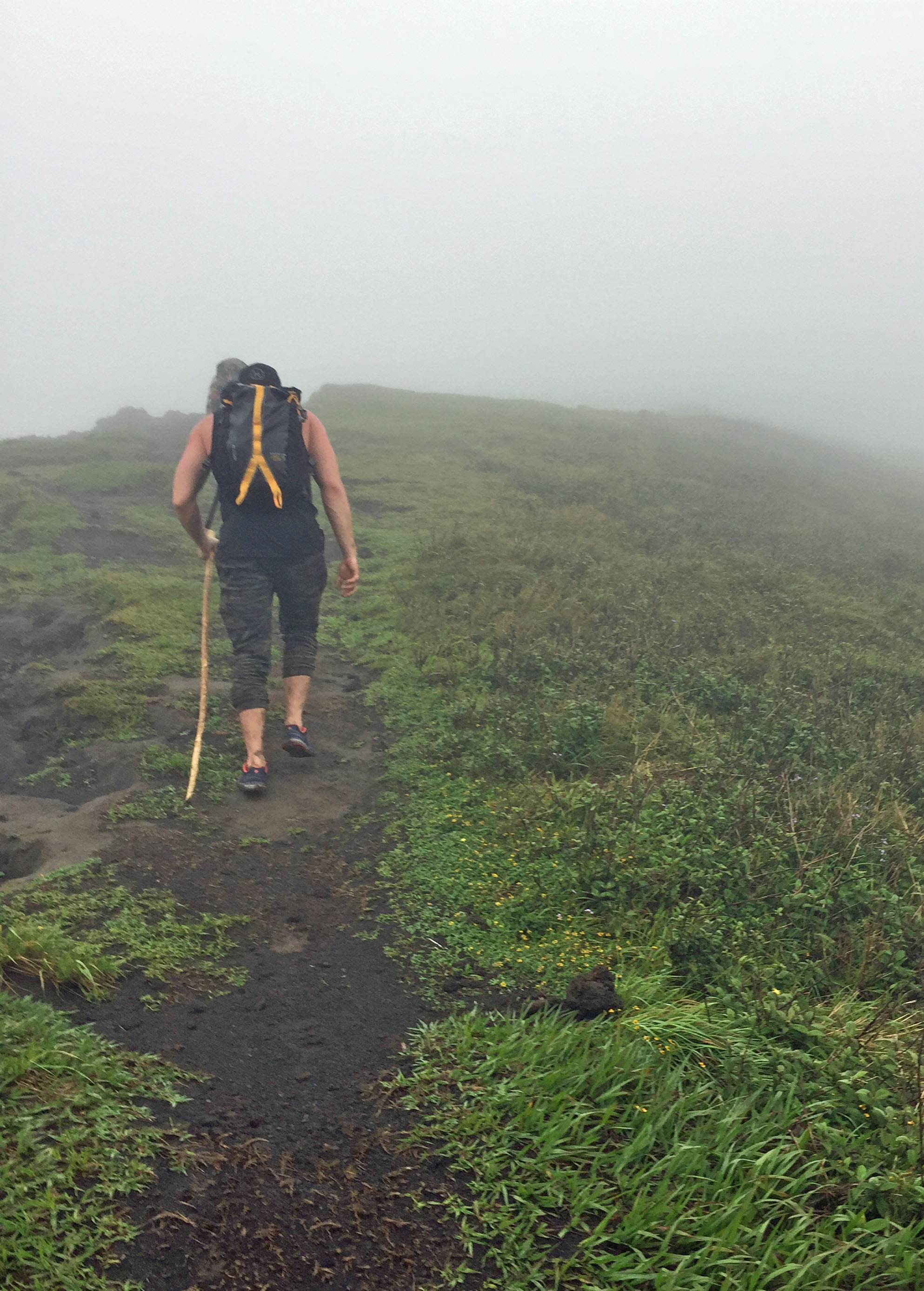 I am a very fit individual, and this was definitely the most challenging experience of my life. I will never forget any of this; the beauty, the thrill, the exhaustion and the physical pain.

After we passed the mid-way point, the real challenge began. It became very windy, and we were suddenly in the clouds. The view was limited and the wind was chilly.

All of a sudden there were no more trails, just rocks and gravel. I didn't want to look down because I knew I would probably freak out. We were actually climbing up the side of a volcano, grabbing rocks with our hands and using our walking sticks to pull ourselves up.

At one point I slid down the black rocks, and my fiancé had to pull me up. My head started to play games with me, and even though I knew we were almost at the top, I had a split second of "I don't think I can make it" pop in my head.

I shook it off, told myself to quit being a baby, and kept on going. There really was no point in quitting since we were standing 10 minutes away from the top. 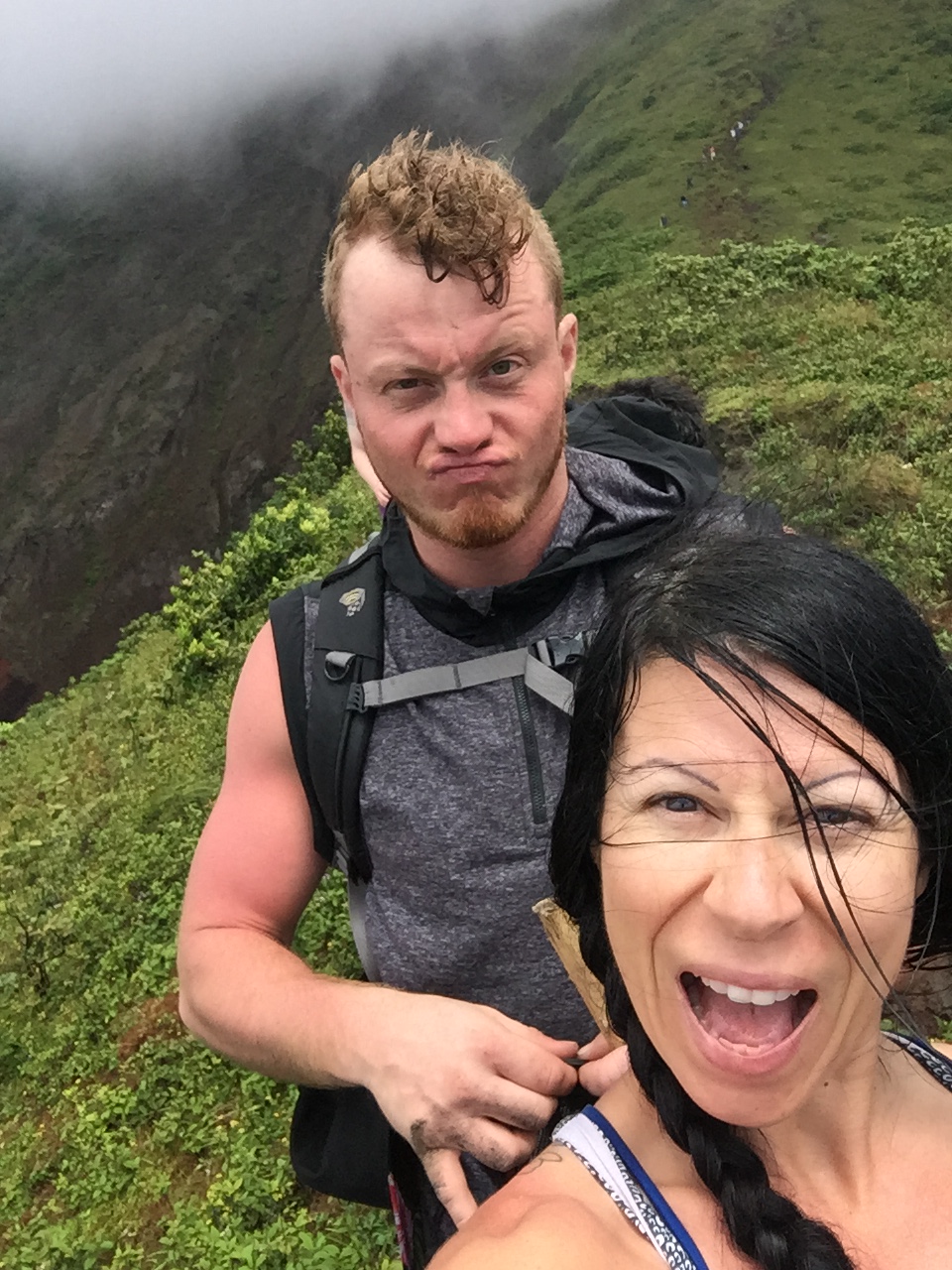 We finally made it to the top and it was bitter sweet. We conquered the volcano but had no view of the crater. Darn. But this was good enough for me. I'm not about to climb that beast again just to try to see the view.

Tired from the uphill climb, we took our descent slowly. We had to be much more careful this time, as the route we now followed was extremely slippery.

My legs actually wouldn't hold my body up anymore and I kept falling down on my butt. I was getting frustrated—this was the most extreme leg workout of my life!

The three of us ended the hike covered in dirt and clay and a few bruises from some slips and tumbles.

Life is an adventure, go out there and explore it. 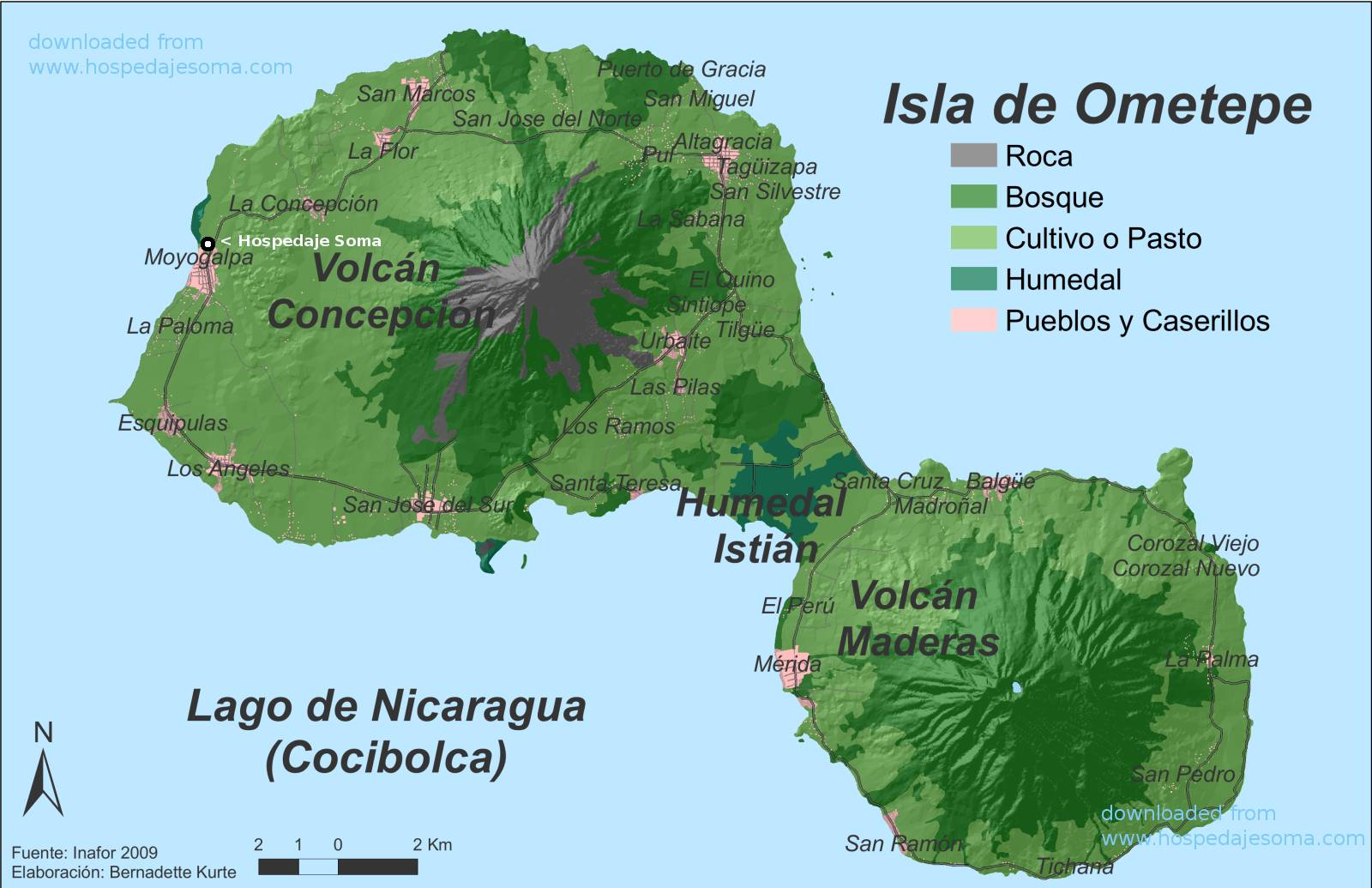 Ometepe has a lot on offer, and we only sampled a bit of it in our three days on the island.

With its un-relenting natural beauty and old-fashioned charm, Nicaragua is a favorite for travellers visiting Central America. It’s low-key, slow-moving, inexpensive to travel and live in, and is often referred to as “the Costa Rica of 30 years ago.” 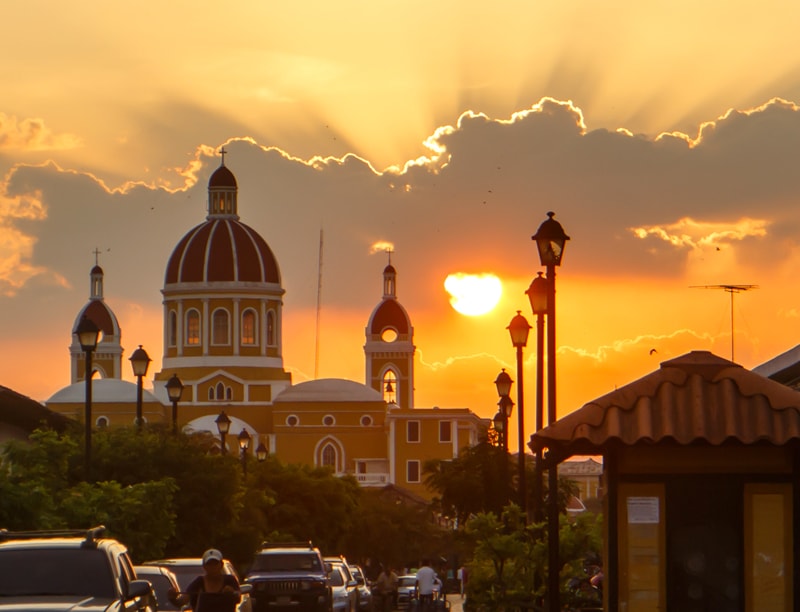 Home to rich festivals and exciting outdoor adventures, Nicaragua is a compelling destination. Go exploring in colonial towns such as Leon and Granada, go “ash boarding” down the side of a live volcano, or tour the hundreds of islands that make up Granada.

In Nicaragua, you can still travel under the radar and have great experiences. 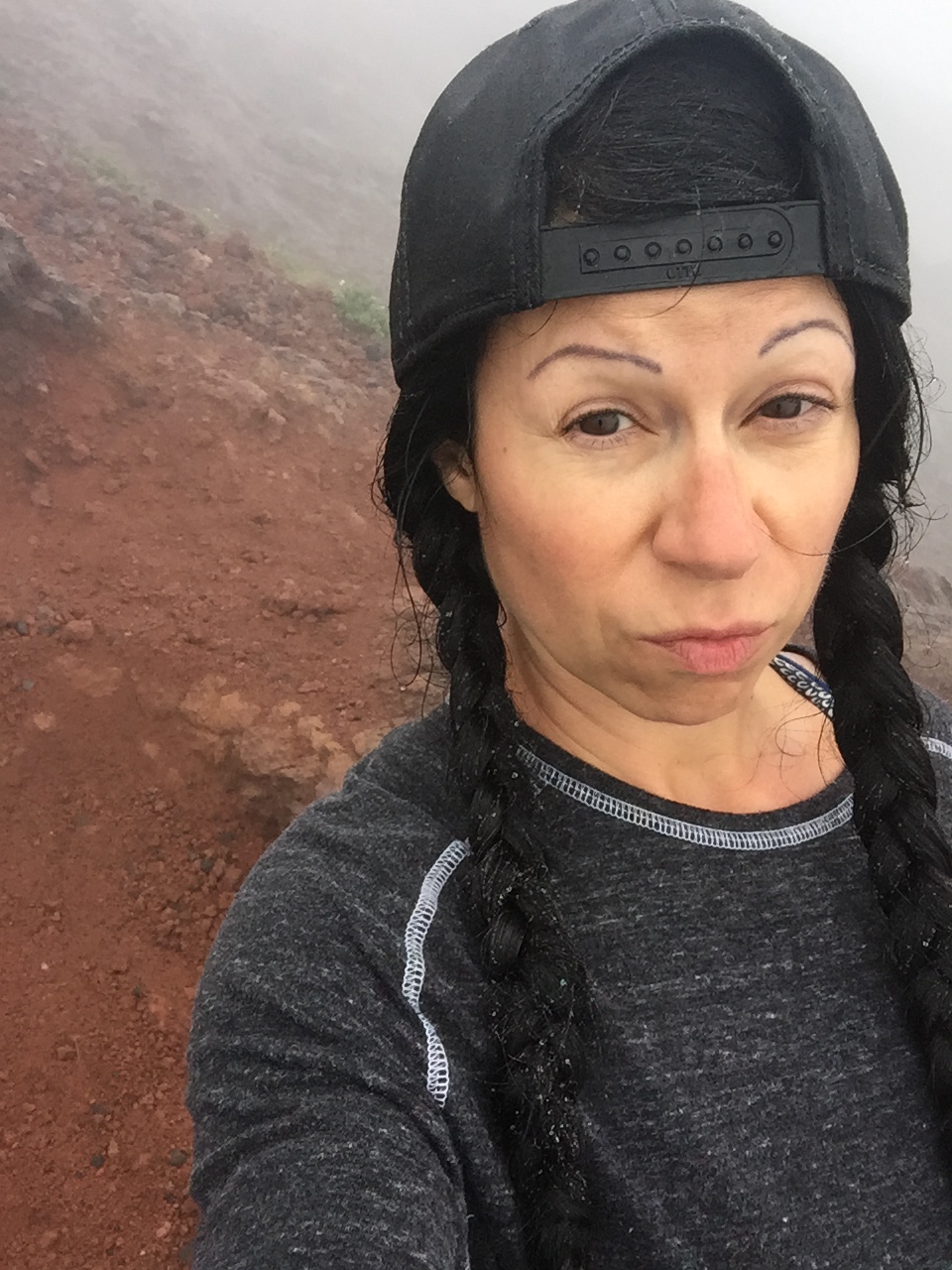 Angelique Bibby is a personal trainer and a retired figure competitor from Kelowna, BrItish Columbia, Canada. Her passion is health, fitness and travel, and she loves to take her fitness on the road and discover new places to hike, kayak and run.

She is also motivated with finding unique places to eat healthy food while traveling, and teaching others how to stay healthy while traveling and having fun.