A camping trip in Kakadu National Park is more comfortable than you might think!

This is another one of those places the then-husband saw on the National Geographic channel and decided we needed to see. 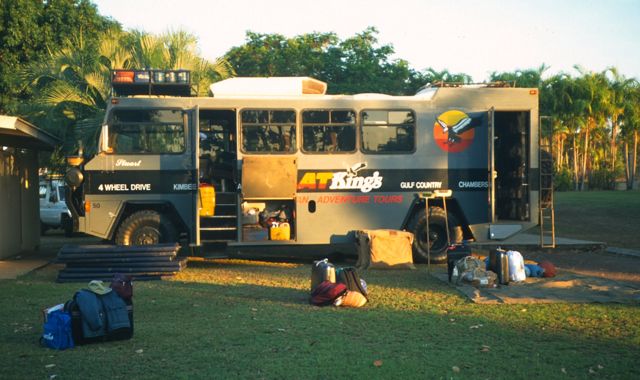 Camping in Kakadu in a Mercedes-Benz RV

We traveled in a self-contained, Mercedes-Benz military-type RV, custom-designed for this kind of adventure. One third of the back end stored tents, tools, sleeping bags, sleeping mats, luggage, food and water. 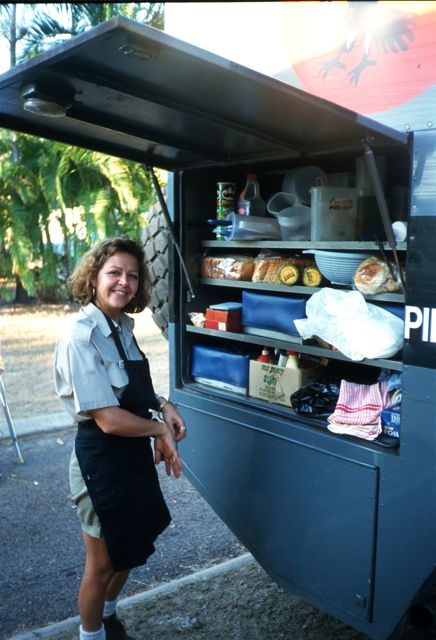 One side of the vehicle flipped down to become a cooking area for meal preparations.

Our guide, Steve, told us they’d named it, “Huey.”

You could tell we were married because every evening we were the last to have our tent pitched, while we “discussed” which peg went where, which tool did what, and the proper way to erect the tent. 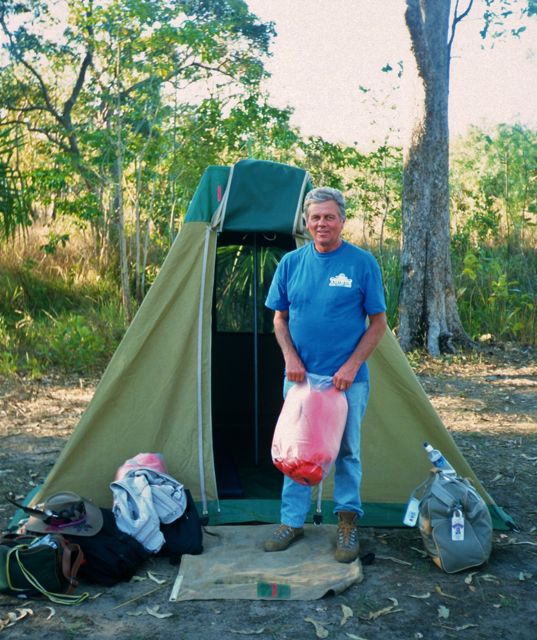 I was grateful that the tents had sealed floors, because Australia is known for having lots of deadly spiders and snakes. 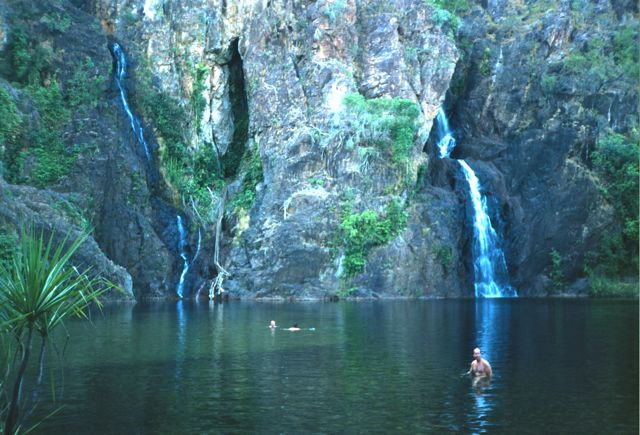 One of our first stops was to swim at Wangi Falls, where parts of the movie, “Crocodile Dundee” were filmed. 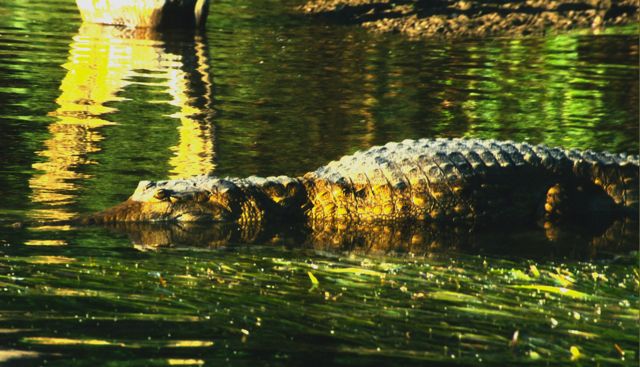 Everywhere there is water we see BIG crocodiles. Interestingly, one of the pontoon cruises we took was on a waterway called the East Alligator River. 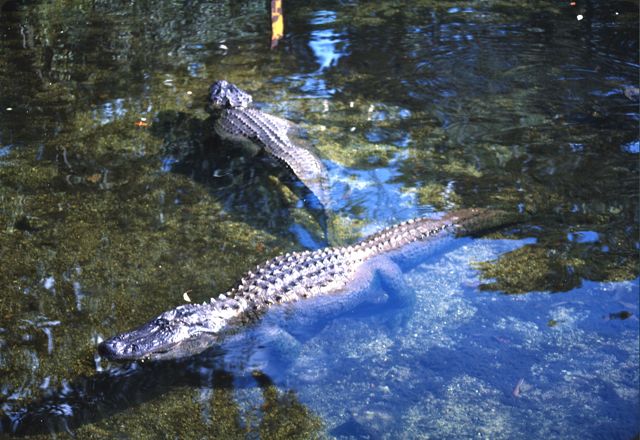 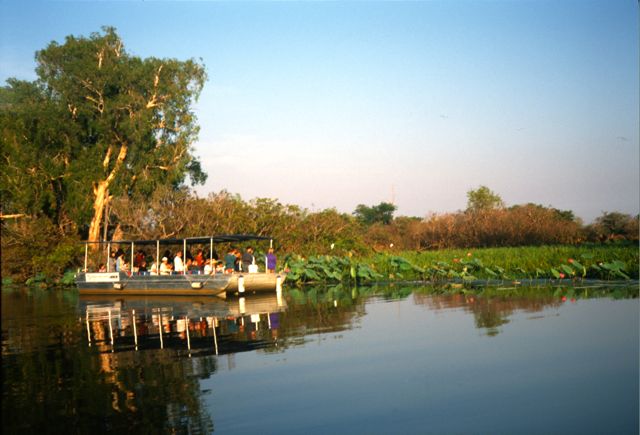 In a covered pontoon boat we explored the Yellow Water Billabong

A billabong is a body of water - not always small - that appears in a a creek bed or low area only during the rainy season; as floodwaters dry up seasonally so usually does a billabong. The word originated in a native Australian language from the words billa for river and bong for dead. 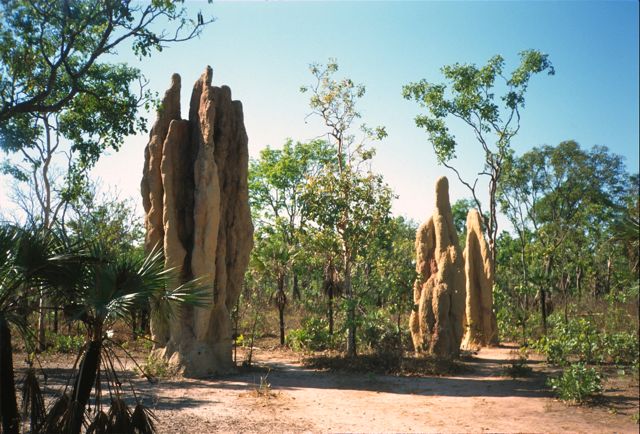 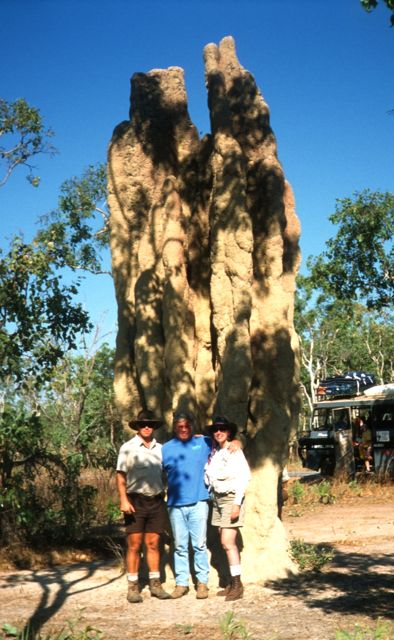 Our guide Steve, posed with us in front of a typical Australian termite nest in this area. 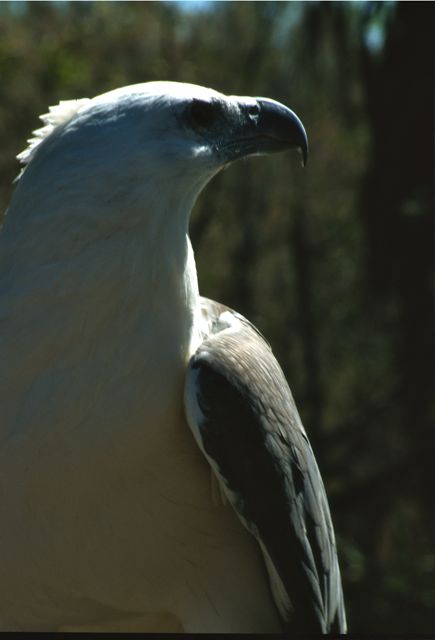 A highlight of camping in Kakadu National Park was a visit to a sanctuary for endangered White Sea Eagles. 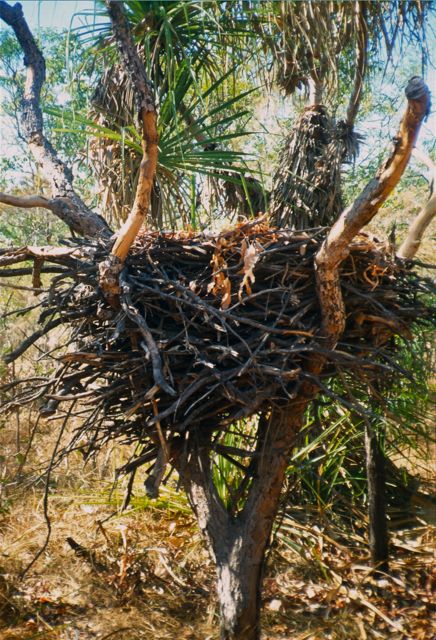 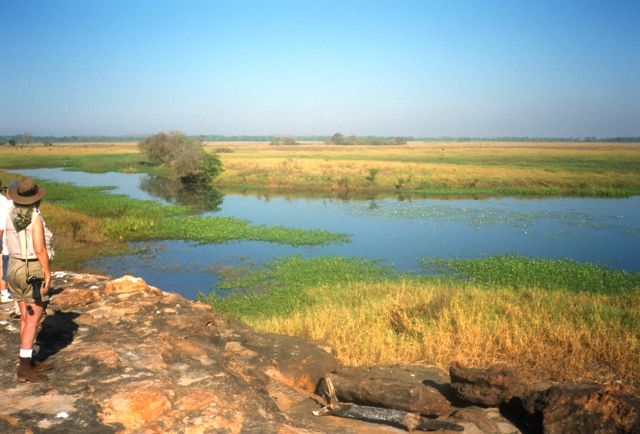 From the top of Ubirr is a stunning view of the wetlands and escarpment country below. 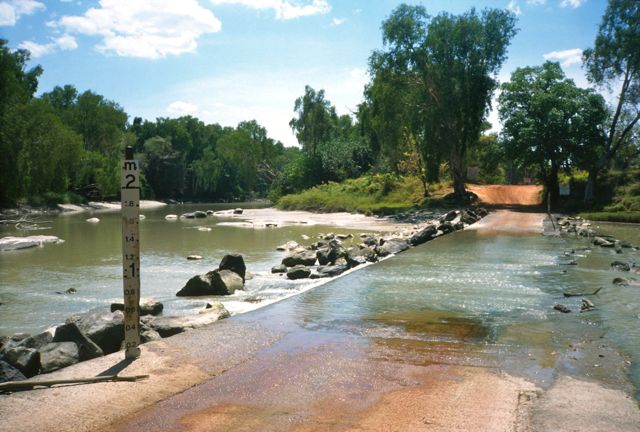 It’s common to see roads like this in Kakadu flooded at certain times of the year.

This can be dangerous for Aboriginal residents as crocodiles may be in even the shallowest water.

Monsoon rains alternately flood the plains, turning them green after the sun that scorches it dry. This area is actually called The Monsoon Forest. 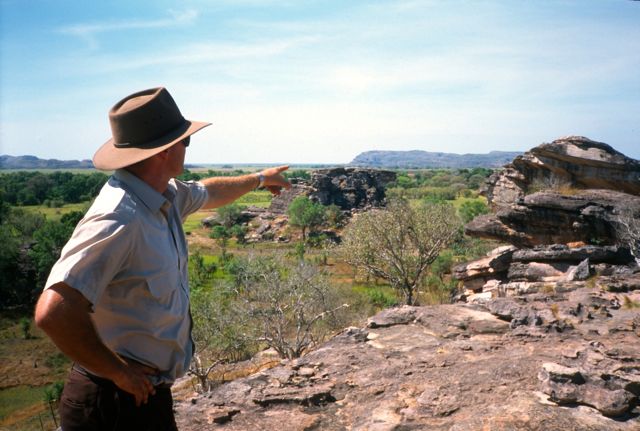 This part of Kakadu, called Arnhem Land, is entirely owned by Aboriginal people who maintain a strong indigenous culture here. 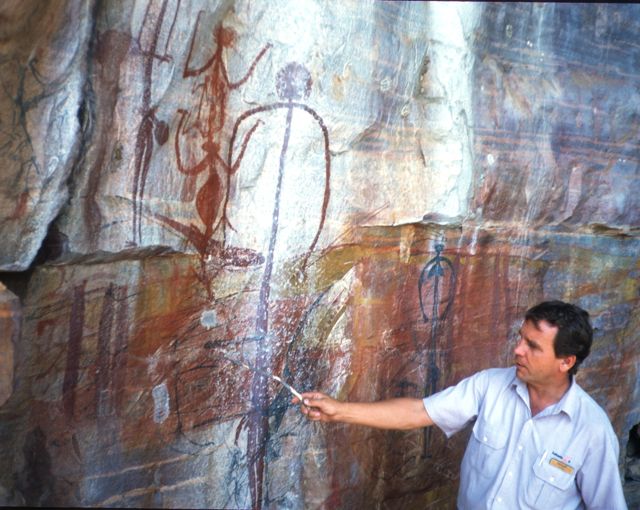 We hike around Ubirr to see these petroglyphs. 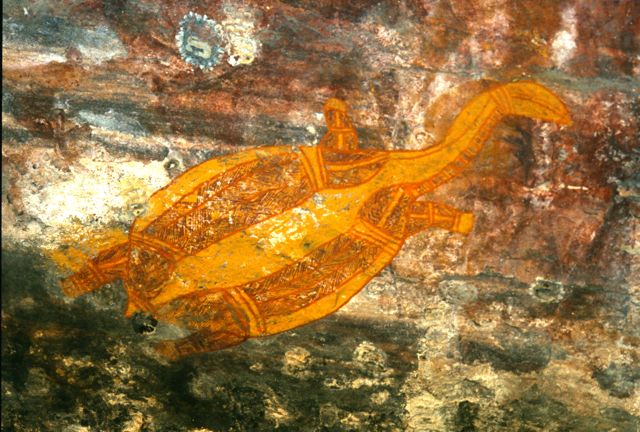 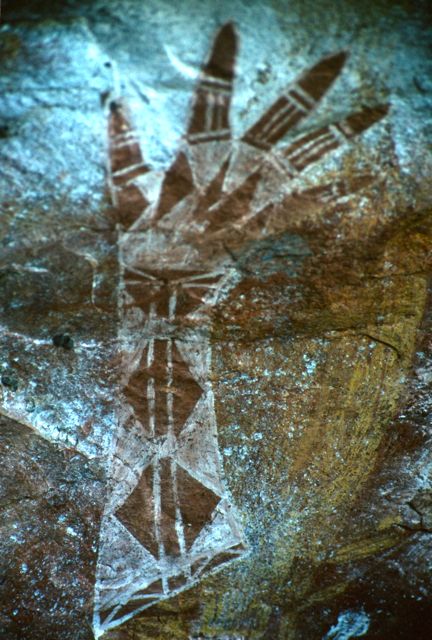 Lunch is served buffet-style from the side of “Huey” that serves as Robyn’s kitchen. 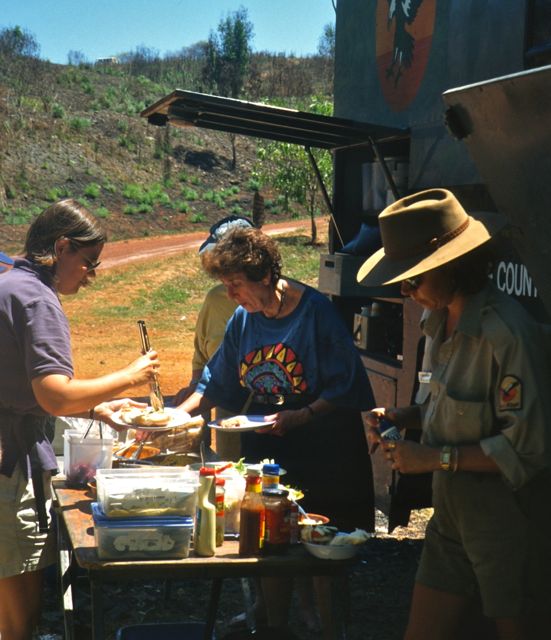 Steven and Robyn make tea by the “Outbackl” method. 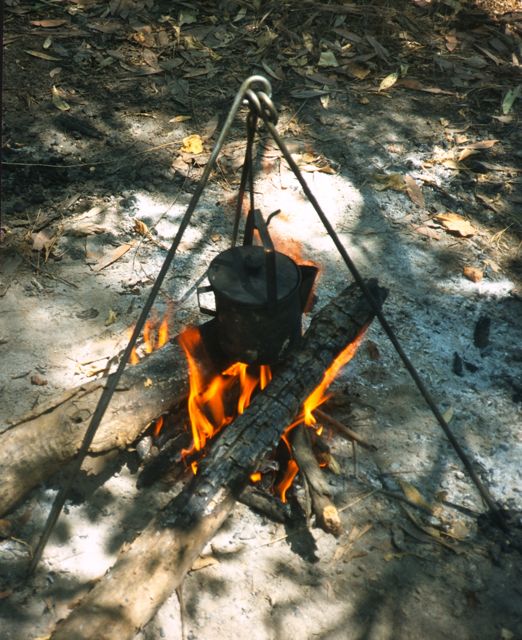 Making tea in a billy can

I couldn’t resist photographing Steve’s knees as he drove. :) 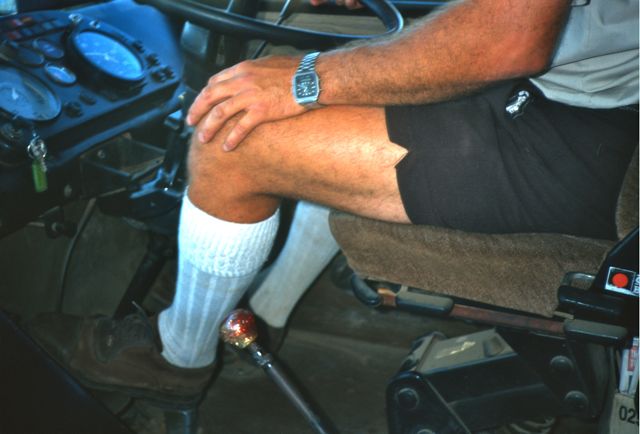 Australia’s Kakadu National Forest is one of the world’s largest great conservation reserves.