From colorful Poulsbo to the wild Point No Point, Kitsap has many fun discoveries.

I began my adventure at the Kitsap Peninsula Visitor & Convention Bureau in Port Gamble, on the shores of Hood Canal.

In the historic M.S. Drew House (c. 1860) office, I found brochures, books and friendly people to help me find my way around the Peninsula. 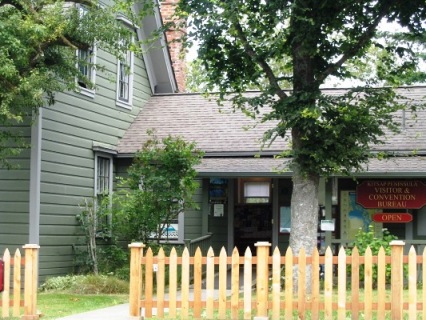 Annual celebrations include a Renaissance Fair, the North Kitsap Arts and Crafts Festival, car shows, Maritime Music Festival and even a Civil War Reenactment, which I missed by a week.

Their New England heritage is seen in several buildings; most notable is St. Paul’s Episcopal Church, built in 1879 to the same design as the First Congregational Church of East Machias.

When Talbot, searching for a deep water site on which to locate a sawmill, sailed his ship, the Pringle, into Gamble bay, he exclaimed, “Timber, timber ‘til you can’t sleep!”

His sawmill, and others like it, supplied lumber from the surrounding old-growth forest for nations worldwide.

“Gamble Bay is one of the most pristine bays in the area,” Jean says. “The Suquamish Indians still harvest seafood there.”

Port Gamble founders Frederick Talbot, A.J. Pope and Captain J.P. Keller voyaged for 171 days from Machias, Maine to the Pacific Northwest, via San Francisco. Their New England heritage is seen in several buildings; most notable is St. Paul’s Episcopal Church, built in 1879 to the same design as the First Congregational Church of East Machias.

When Talbot, searching for a deep water site on which to locate a sawmill, sailed his ship, the Pringle, into Gamble bay, he exclaimed, “Timber, timber ‘til you can’t sleep!”

His sawmill, and others like it, supplied lumber from the surrounding old-growth forest for nations worldwide.

“Gamble Bay is one of the most pristine bays in the area,” Jean says. “The Suquamish Indians still harvest seafood there.”

A neatly-painted sign in front of a two-story building with a peaked roof identifies it as Franklin Lodge No. 5 (c. 1871), the oldest active Masonic Lodge in Washington state. 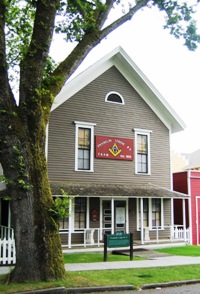 Its eight original members carried the charter petition by canoe to Steilacoom, the county seat and location of the first post office in Washington Territory.

The Morrill S. Pope House (c. 1900), was barged in by its owner after 1929. Supervisor of the mill, Pope had lived in the house at Port Ludlow. Today it houses Friends Antiques.

The General Store and Café is still just that, offering clothes, toys and gourmet foods as well as your basic groceries.

Popping into the Tea Room at Port Gamble, I'm greeted with pastels and lace and sweet smells highlighted by soft piano music.

A specialty of the Tea Room is Chocolate High Tea: a variety of tea sandwiches, Cranberry Pecan or Lemon Scones, a Fresh Fruit Chocolate Fondue, and your choice of tea or French Press Coffee. (Reservations required, please).

Tea Room owner Janis Kelley tells me her vision for the tea room, besides special events like bridesmaids’ teas and Little Girl Theme Parties, is to make "all women to feel beautiful and pampered.”

Jean says frequently the Red Hat Ladies’ groups have events here. For other visitors owner Janis Kelley plans a wall of hats ladies can "borrow" when they come for tea.

The Tea Room was originally the New York House (c. 1863) or company Guest house, also serving as hospital, office, and home for the town’s resident physician.

No one knows exactly how the house was named, but historic documents show that an original resident physician was from New York.

Across the street at Mz. Bee Haven Antiques, a historical marker identifies the one-story structure simple as “Market.” Circa 1903, this is where the mill company sold meat and vegetables raised by local farmers. 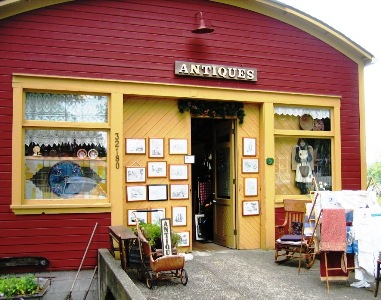 White-bearded Michel Robin, whose wife owns the antiques store, greets us with a distinct French accent.

Michel sits penning charming ink drawings of his neighbors’ homes and businesses. He says he doesn’t consider himself an artist.

Around the corner the Trading Company offers the work of local artists, including furniture made from the roots and trunks of native Northwest trees such as Douglas Fir and the red-barked Madrona.

“Some pieces are so big they’re helicoptered out.”

Houses built in 1873 were originally for married workers. Single men slept in company-owned dormitories and at the company cookhouse.

Authentically restored and operated by Pope Resources, Port Gamble is the only remaining company-owned mill town on Puget Sound.

“Are there ghosts here?” I ask.

“Oh yes,” Jean says. In their office things move, and sounds are heard upstairs when there’s nobody there, and of course at the cemetery…Buena Vista Cemetery dates back to 1856.

But in the San Juan Islands, "the rain comes around the mountains, and Port Gamble gets only about 20 inches" so they're in the Rain Shadow. Most of this rain comes in winter, not on beautiful summer days like today. 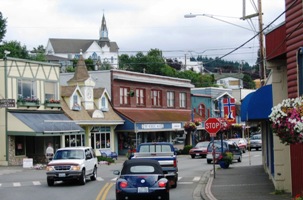 Jean takes me on a drive south of town on Highway 3. Here’s the Kitsap Memorial State Park, with panoramic views of the bay, rental cabins for families, beach combing, a log hall for weddings, and a steep path to a beach below.

We drive country highways flanked on both sides by walls of towering Douglas Fir, broken only by the occasional farm, road crossing or roadside fruit stand selling Bing and Queen Anne—locally called Rainier—cherries.

The air smells like a fresh Christmas tree in your living room.

A sign coming into Poulsbo announces, “Welcome to Viking Junction.” This is home to the regionally famous Poulsbo Bread Bakery. On such a beautiful day there’s a midday parking challenge, but we’re just in time for our electric boat ride. 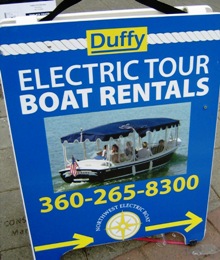 Andrew Smith and William Archer started Northwest Electric Boats in March, 2006. “I went to work for a friend of the family with a rental place on Lake Union,” says Andrew. “He taught me everything.”

At the base of pilings (the pier itself disintegrated years ago) seals sunning themselves on logs raise their heads as if to ask, "So, what are you lookin' at?" Two or three swim out to investigate our craft, then swim back to resume their nap. 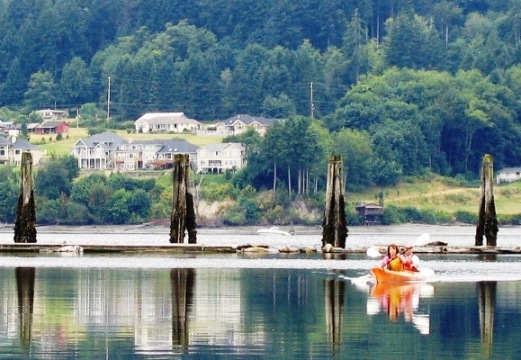 We break open our lunchbox from Mor Mor. The restaurant’s name mean’s “mother’s mother” in Swedish. Manager/owner Laura Nesby says that with as little as 20 minutes notice, a delicious meal can be prepared to go. 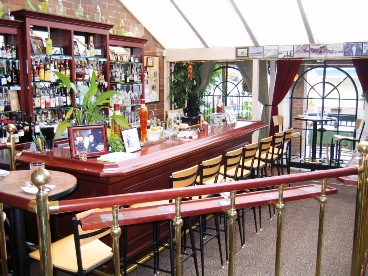 After the electric boat ride, seal-watching and lunch, Jean and I art-gallery hop, then head north from Poulsbo to explore more of the peninsula.

Jean says I must see the 18-acre Farm Kitchen, originally a commercial kitchen for rent, but now the location for gourmet cooking classes and visits from guest chefs. Imagine a gourmet kitchen and a big garden in the middle of the woods!

She and business partner Anne Thatcher designed the place so “You can stand anywhere, look out and see gardens.”

The first Saturday of the month they offer breakfasts featuring yummy fare like stuffed French toast with citrus cream cheese.

The Hansville Road takes us all the way up to the top of the Kitsap Peninsula. In addition to Douglas Fir, we spot alder, maple, cedar, madrona and red Japanese maple trees.

At the top of the peninsula, on a long beach of gray sand containing massive driftwood, is the Point No Point lighthouse. 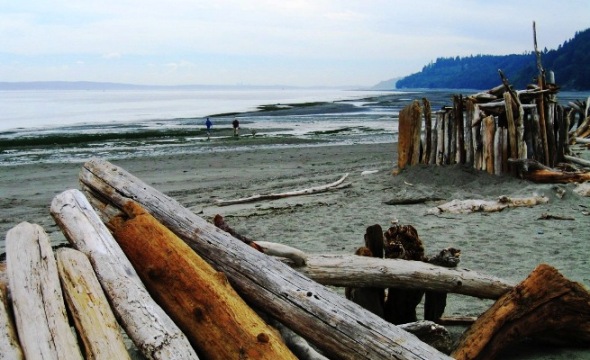 "Everything passes here," says Jean. "Orca whales, cruise ships, container ships through the straight to get out to the ocean.”

She points out the oldest known eagle's nest in Washington State.

Walking trails vein the marshy wetlands. Families enjoy digging for clams and building driftwood lean-tos, just for fun. On a clear day you can see Mount Rainer to the southeast, Mount Baker to the Northeast, and Whidby Island across the water.

The Indian name for this place is “HAHD-SKUS. " According to a historic marker, a treaty was signed here January 26, 1855, transferring “the land lying from the crest of the Olympic Mountains to Puget Sound (except prior treaty lands) from the Sklallam Sko-ko-mish To-an-hooch Chem-a-kum and all Indian sub tribes to the United States of America.” 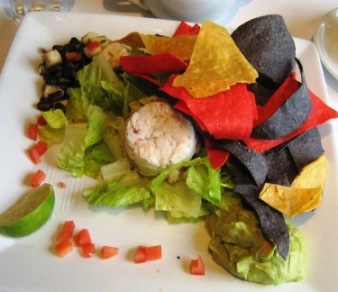 The next day, over a Tortilla Crab Salad at Café Nola in Winslow, Jean tells me that after the first McDonald’s appeared on the Kitsap Peninsula, city fathers decided no more fast food—not even a Starbucks.

I’m told that the peninsula has a great transit system; you can take a bus from Winslow all the way to Port Townsend with the Kitsap County transit system. And both Bremerton and Winslow are renovating their downtowns to be more pedestrian-friendly.

After an afternoon perusing more art galleries, we dine at Whiskey Creek, a Keyport restaurant reminiscent of a popular road house you'd see in old movies. Here “soup of the day” is steak and potato, and there's Dixieland jazz the first Tuesday of each month.

The building opened as the Keyport Mercantile in 1927, but in 1934 became the Keyport Tavern. It’s been an entertainment establishment ever since.

Décor is all rustic furniture, cowhides, stuffed pheasant, a mounted bighorn sheep head, lots of antlers and saddlery. A hand-painted sign above a deer head, left over from Prohibition, reads, “No alcoholic beverages Allowed on Premises.”

The rocks of the fireplace wall came from Whiskey Creek Beach, northwest of Port Angeles.

And where else could you enjoy an appetizer of beer-steamed clams?

I tell Jean she has the best job in the world—working in a historic house, photographing and sharing with visitors a magical place. It's easy to see why Washington State's Kitsap Peninsula's official motto is, "Live—Work—Play."