Carolyn: How did you get into motorcycling in the first place?

Liz: I grew up, the oldest of six, on a farm in St. Catharines, Ontario (near Niagara Falls) where my parents grew peaches, sweet and sour cherries, pears, rhubarb, and squash.

When I was 16, my brothers bought a used Honda Cub to get around the farm. I still don’t know how I managed to get time on it, but that was the beginning.

I purchased my own first motorcycle when I was 21 and except for a couple of years, have not been without one since. 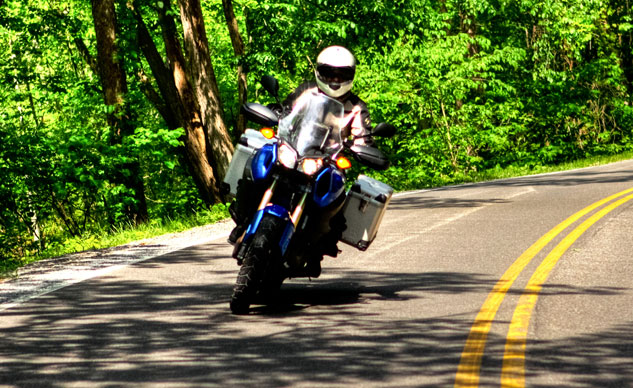 Liz Jansen on the road

Carolyn: Were you hooked immediately on riding, or did that come later?

Liz: I loved it right from the beginning and it became a routine part of my life. It was no big deal, at 16, your world view is very different.

It became most meaningful to me after significant life changes at age 49. I've done most of my riding since then and had the best experiences and greatest adventures with long distance touring.

My motorcycle has led me to the most amazing people and experiences. My life is much richer because of it.

Carolyn: Why do you recommend motorcycling for women?

Liz: I don’t. I recommend that if it’s something they want to try for themselves—not because someone else wants them to—then by all means do it.

Motorcycling isn’t for everyone, and if you’re taking it up for the wrong reasons, it’s not safe nor gratifying.

Carolyn: What questions should a woman ask herself to determine if motorcycling is really for her?

Liz: I talk about this a lot. I wrote a post called “10 Things to Consider Before Learning to Ride” where I talk about asking yourself why you want to do this and addressing the financial investment, including insurance, maintenances and storage. You can read it HERE.

If you decide motorcycling is for you, then don’t let anything or anyone stop you from succeeding, even if you have to try a number of times.

I haven’t come up with anything else that replaces the freedom, independence, confidence, and empowerment that you get from riding a motorcycle. These are all qualities you can apply to any area of your life.

It opens up a whole new world for you, well beyond two wheels. There’s a strong bond between riders and a fantastic community.

Carolyn: How would a woman find a supportive motorcycle community?

Liz: She has to look for it. It requires action and you can't be shy.

Go to the kind of motorcycle events and places you enjoy, even if you have to go by yourself. That's where you're going to meet like-minded others.

Don't be afraid to approach other riders and start a conversation. Motorcycling is a great common ground and other riders are only too happy to speak with you.

But just because they ride a motorcycle doesn't mean you'll be friends.

Be persistent and patient - kind of like the ugly duckling looking for his family. When you find that tribe, it's SO rewarding.

And you'll have a lot of fun in the mean time.

In any case, if you get stranded, lost, or need help, another rider will almost certainly help you out.

Carolyn: What’s your scariest motorcycle experience and what did you learn from it?

Liz: It was last year when I was on a 6-week road trip. I was visiting friends in Idaho who lived on a mountain ridge, accessed by a long gravel driveway with a few sharp turns in it. 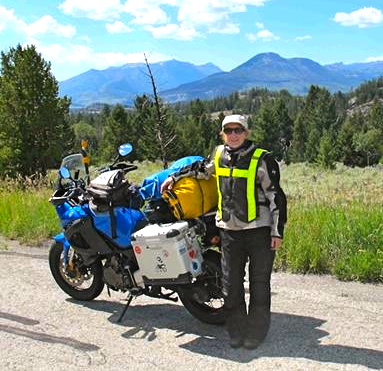 We were heading out one morning and before we’d even left the yard to head down to the road, I’d lost my confidence. I let fear take over the controls

There was no rational explanation. I had the skills to do it, and the motorcycle best suited for that kind of riding.

I failed to negotiate one of those turns properly and ended up sliding down the side of the hill.

Fortunately, I was uninjured and there was minimal damage to the motorcycle.

Even before the neighboring farmer arrived to tow me out, we all knew an important lesson had been delivered.

After 44 years of riding, I’d suffered a loss of confidence because of silly thoughts, and it caused me to lose focus. I’d been doing a lot of riding in heat and smoke from forest fires the previous weeks and I was tired, which didn’t help matters, but mostly, it was allowing those voices we get in our heads, to take control, when we know there’s no reason for it. When they crop up, do whatever needs to be done to put them aside before continuing.

Carolyn: What one thing would you recommend that a woman could do today if she wanted to make serious changes in her life? 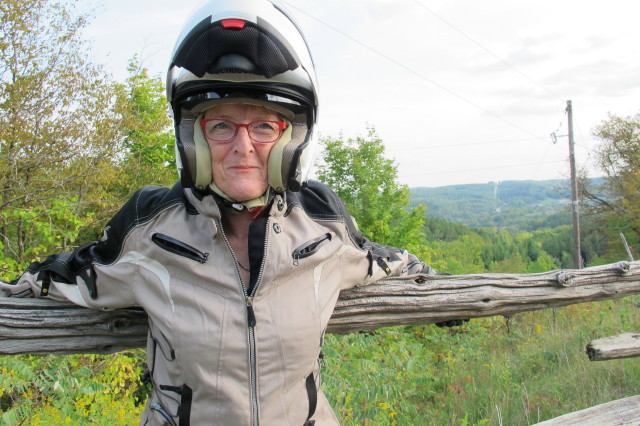 Liz Jansen is the author of Women, Motorcycles and the Road to Empowerment, available at Amazon.