Night fell suddenly upon the tiny yacht, an insignificant blot on the Tasman's turbulent sea. Ominous clouds closed in, and rain fell heavily. The same three and four meter waves that had been so exhilarating surfing down in the light of day, became menacing monsters, intent on dumping tons of frothy water on Levi's deck and into her cockpit. Sails were double reefed in anticipation of a stormy night.

We'd left New Zealand's picturesque Bay of Islands seven days before aboard my yacht Levitation, a Cavalier 32, bound for Queensland, Australia. I had arranged to clear customs at Lord Howe Island, as is popular for many yachts cruising between the two countries. 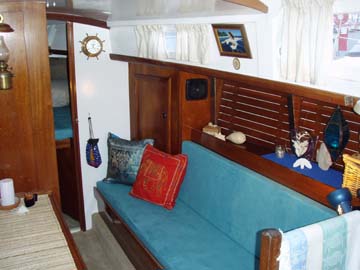 My crew: Orit, a 24 year old Israeli girl, a bright backpacker, who had no sailing experience. She had a spell in the army after school and wanted to become a marine biologist.

And Nick, 50ish, who had sailed most of his life and crewed yachts in Queensland's coastal races, though never owned his own yacht fancied himself as an expert in marine navigation.

Orit and I were on watch throughout the night. Searching the darkness through the driving rain, we eventually made out the black triangle known as Balls Pyramid and the towering mountains of Lord Howe Island.

I found it strange... I couldn't see any navigation lights... just the ever increasing size of the black land mass. I searched the chart for the magenta-colored flash mark to indicate a beacon and couldn't find any. I couldn't even spot the light that should be on the top of the mountain for air traffic.

I put out a call on channel 16 on the VHF periodically throughout the night. No response.

Dawn finally broke, grey and cheerless, bustling 25-30kt winds from south east churning up the sea. At 0600 hours the radio crackled into life and I made contact with someone outside our little world.

What a relief, I was anxious to get the marine weather forecast. The weather and tide conditions were not favorable to navigate the narrow coral reef entrance, I was told, but by mid-afternoon the situation was expected to improve.

Exhausted we all wanted to get in before nightfall and fatigue was making us edgy. "As soon as my feet touch land, I'm heading for the nearest McDonald's, a Big Mac and thick shake," Orit fantasied.

"For me it's a long hot shower, clean hair, dry clothes, and then I'll settle for a cold glass of chardonnay," I responded.

Nick was quiet! Darkness set in as the harbor master led us in through the narrow coral entrance, where wind still whipped up white caps on the calmer waters of the lagoon. He shone his high-beamed torch on the two unlit triangle navigation aids and lined them up.

There were no port or starboard markers, and what I thought was a leading light turned out to be a solitary light on the shore. The mooring was near the coral entrance and the chain was difficult to get up and secure in the still stormy conditions.

The island was dark and forbidding. Where was the town, lights of any kind (navigation, street, car!) and all the familiar signs of life we have been accustomed to!

This was a really strange to me. In all my travels I had never experienced it before. This was far from what we imagined as our tropical island getaway. 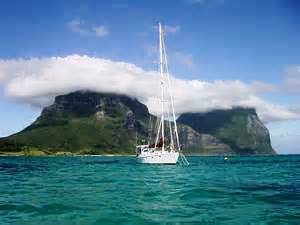 The sun rose on a new day, and so did our spirits.

We were in awe at the majestic twin mountains of Gower and Lidguard, their summits shrouded in mist. Enticing emerald and turquoise waters of the crystal-clear lagoon met with sun-kissed sand and lush tropical forest. Ivory foam cascaded over the world's most southerly coral reef. We hand fed schools of fish.

Impatiently we waited for the wind to drop, and then we clambered aboard my inflatable, balancing 3 garbage bags of damp and smelly washing. After a long row we hauled our load up the boat ramp. Terra firma how wonderful it felt.

The customs officer barefoot and wearing shorts and a t-shirt met us at his office (the back of a four-wheel-drive). I paid a fee of AUD150 and made arrangements for the quarantine check.

Now was the time to indulge our desire to explore. Nick headed off to Wilson's bike hire. We'd catch sight of him on occasion, head down with a multicolored helmet on, peddling furiously. Orit and I decided to walk.

At Aunty Sue's garden restaurant we devoured a meal of freshly caught fish and garden salad. What a luxury after the last eight days.

The Leanda Lei apartments allowed us to use their laundry. Orit and I rowed back to Levi. Nick was still doing his own thing and elected to acquaint himself with some of the local at the Bowling Club.

As night fell the wind whipped up the lagoon waters. Levi swung alarmingly, at times healing over. Bullets of wind accelerated down the mountains at amazing speeds, swinging us and pulling us against our mooring.

I feared that the chain would break and we'd end up on the rocks or coral. In a lull we put harnesses on (yes at a mooring) and ventured out, securing the boat with more rope and chain.

Our first night was very unsettled. At intervals throughout the night I checked the GPS and landmarks to make sure we hadn't dragged. The travel brochures described Lord Howe as "not just another island, but another world." And it is!

Discovered in 1788 and settled in 1833, Lord Howe is one of the world's first three islands to be given the status of world heritage listing and is breathtaking in its natural beauty, marine and plant life.

It is only 11km long and 2.8km wide, 700km NE of Sydney, Australia. Two volcanic mountains dominate the island and overlook the reef-fringed lagoon and its rolling surf.

Many of its 300 residents are descendants of the original settlers. 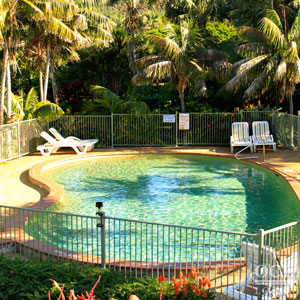 The Wilson's, who have operated Ocean View apartments for more than 90 years, have collected much memorabilia from visiting yachtsman and travelers during that time.

Nick not surprisingly decided to fly home. Orit stayed with me and we settled into a laid -back lifestyle while we made repairs and waited for a favorable weather window.

One night we walked without fear in pitch darkness, as there are no street lights to the bowls club under a ceiling of dense tropical foliage. Keys are left in the ignitions of cars and doors unlocked, no one steals them where would they go.

Car accidents, the worst I was told was hitting a tree while drunk after leaving the bowling club. The speed limit is 25km throughout the island and bicycles have right of way.

We enjoyed happy hour at the bowls club, live music at Pine Trees Resort and played Bongo Drums with some of the locals as they strummed guitars and sang.

No we did not find a McDonald's or even an ATM. High-rise buildings, large hotels, movie theaters, shopping malls and marinas were all noticeably absent. But then too were the things that can only go with development; pollution, traffic jams, high crime rate and stress. 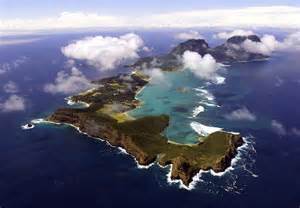 What we did find in abundance were the most important things that nurture the soul. Lord Howe is unspoiled and serene, a haven for rare and beautiful birds, a mecca for fishermen. You can scuba dive or snorkel in the crystal-clear lagoon and there's deep water fishing beyond the reef. It's a place to escape the fast life... And lazily embrace beauty and simplicity.

Christine Couch was introduced to the joys of sailing and became the proud owner of her yacht Levitation, a Cavalier 32. With a passion for adventure she sailed the Bay of Islands, to Tonga in the Pacific, then across the Tasman to Australia via Lord Howe Island. From there her adventures took her to the Whitsunday Islands.