The city of Nuremberg (In German, Nürnberg) is distinguished by medieval architecture such as the fortifications and stone towers of its Altstadt (Old Town).

Nuremberg is a famous medieval city in northern Bavaria, in the middle of Franconia,  with a long and storied history. It was first mentioned in 1050 CE when a Holy Roman Emperor established an imperial castle there. It was here that the emperors held court, making it the unofficial capital of the empire. 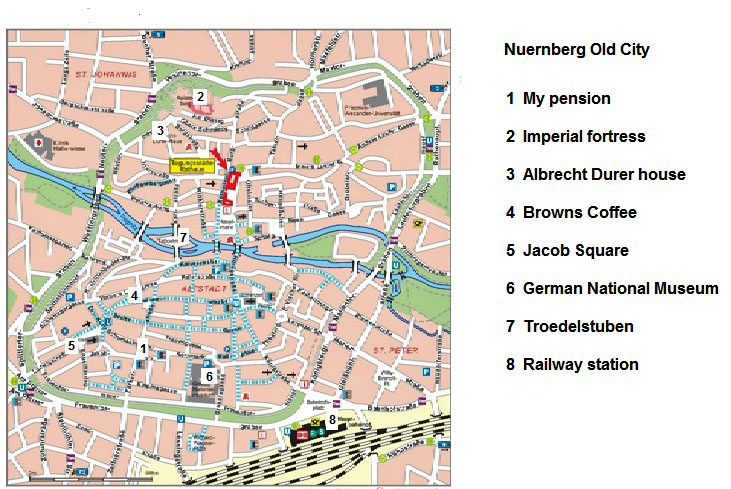 The city became a major commercial center during the middle ages and in 1219, Emperor Friedrich II made it an imperial free city. It was the home of Albrecht Duerer, the famous artist, and the center of the German Renaissance, and it was a Protestant city during the devastating Thirty Years War.

Napoleon ended its independence when he conquered the German states and made it part of Bavaria. 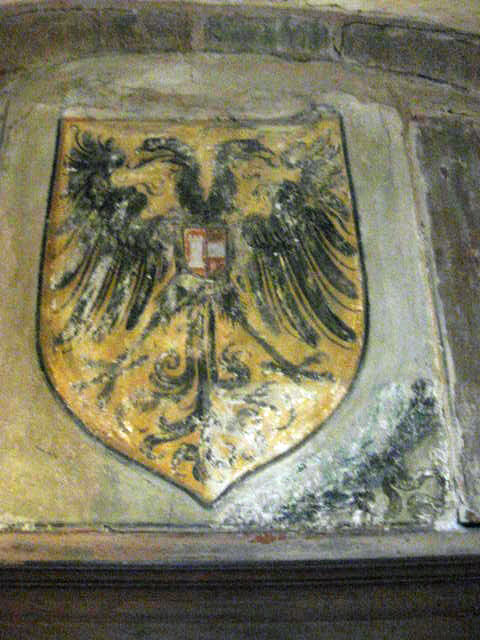 The imperial eagle decorates doorways and ceilings in the palace and the gates of the city as well. In the palace are copies of the imperial regalia, the crown, and medieval armor and weapons. 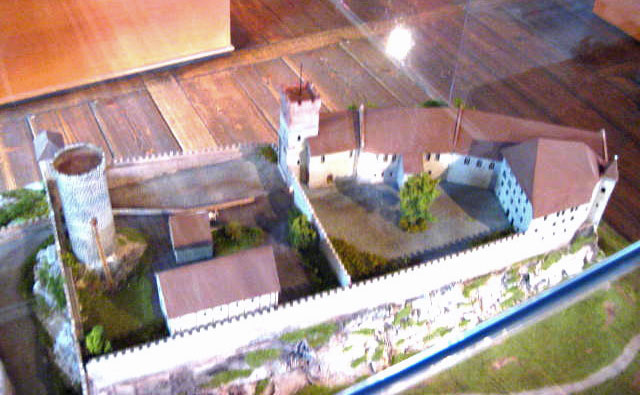 A model of the fortress at Nuremberg, Germany.

A model of the fortress shows the palace on the right and the tower on the left which I was about to climb. The small building below the tower is the 1000-year-old well house. The well plunges 200-plus feet down to the water table.

After the docent gave her talk, she chose me to pour some water into the well. It took almost a full minute for the water to hit the bottom!

Unfortunately Nuremberg is frequently associated with the Second World War, for 3 main events.

Despite heavy bombing by allied air forces during the war, Nuremberg was chosen for the War Crimes Trials mainly because it still had intact buildings that were big enough and suitable enough to detain the prisoners, conduct the trials and carry out the resulting executions. 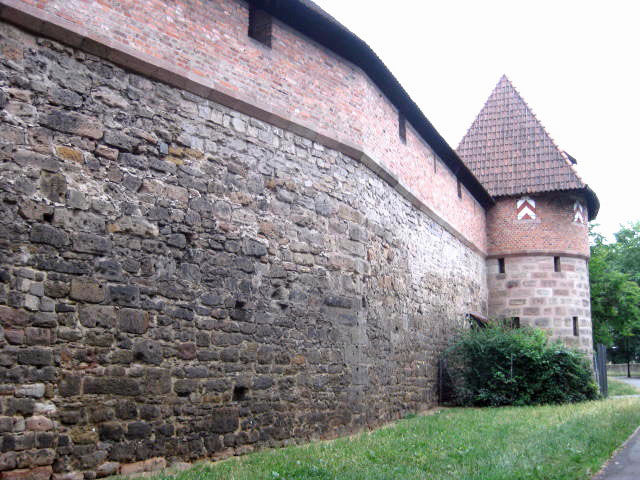 After the war Nuremberg was largely rebuilt using the original stones and bricks. Today the castle, the town walls and towers, the old bridges, and the houses again exude their medieval charm. 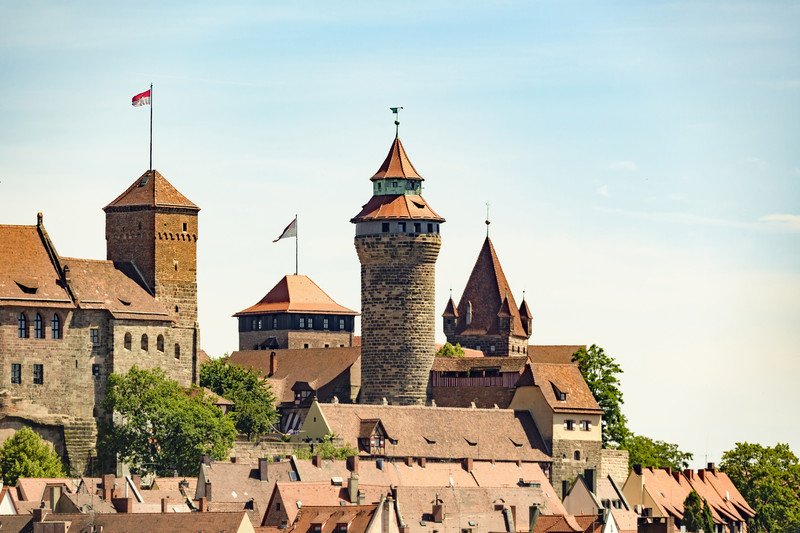 I thoroughly explored the city on my computer via Google Earth before I physically arrived there. I examined every street and inspected every tower from all sides. Google Earth lets me get right down onto the street so I could see the front door of the pension which would be my home for the next two days.

So when I stepped off the train, every street and building was familiar to me. I walked right up to the pension, keyed in the code, and found my room.

After ten hours in the air, an hour getting through passport control, and another three hours by train to Nuremberg, I was exhausted. Yet the evening was early and I dearly wanted an authentic German dinner.

I discovered Estragon, a cute little hole in the wall restaurant around the corner from my pension. Estragon has the usual tables out in front and a few tables indoors, but they also have a quiet high-walled patio in the rear with plants, canopies, and a little fountain.

I chose a table in the patio and ordered the pork medallions in mushroom sauce with potato patties and summer veggies. I ordered two red wines for starters and asked the waiter for a pen to take notes. That got his attention!

Trollinger wine is a light cherry red with a hint of Kool-Aid and no bite. No nose on this one yet more body than a Bandol rose. It went well with the veggies and it would do with Asian food – not that I ever eat Asian food – so long as it was not too spicy.

Domina is a darker red, a bit bolder, with aspects approaching Pinot Noir. It has a slightly dry finish and accompanied the pork well. I set aside the Trollinger still half full and ordered a Bacchus. Now the waiter was really intrigued.

Bacchus is a regional white wine with solid body and flavor, fresh and crisp with a hint of sweetness. It was ideal with the pork and mushrooms and I finished that one. That night I slept soundly.

Being without internet in my room, I set out early the next morning to find either an internet café or a place with WIFI. Down the street I found a hotel and the front desk clerk had a good detailed map and was happy to give instructions to the nearest Starbucks. 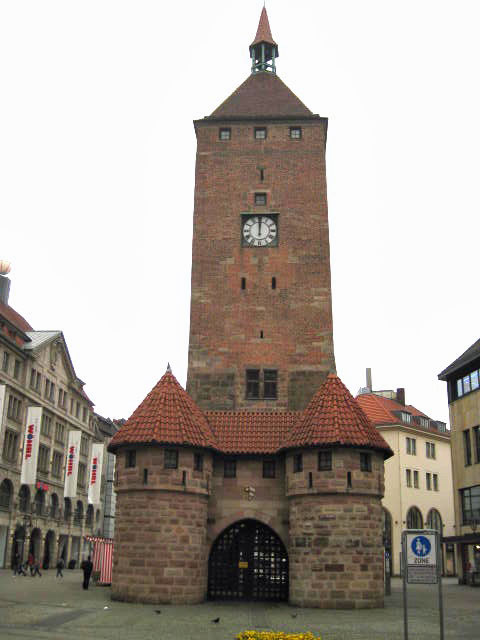 On the way to Starbucks I came across an enormous tower in the middle of Jacob Square (Jakobs Platz). They have converted the portcullis gate into a subway entrance complete with escalator!

Starbucks was closed but Browns Coffee House was open. The cheerful barista gave me the WIFI password and a good coffee.

I started my exploration of Nuremberg with the imperial fortress which crowns a steep sandstone escarpment within the old city walls. Every room breathed history. I saw copies of the imperial regalia, crown, etc.

What impressed me most was the feeling that Holy Roman Emperors from way back in the middle ages walked these halls, opened these doors, and received princes in these rooms. 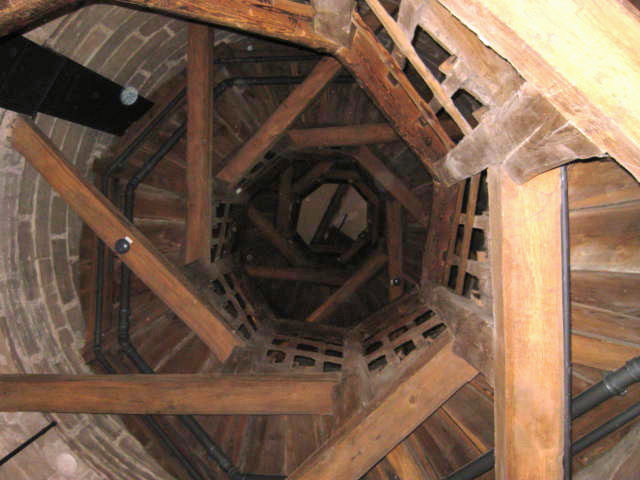 I was also impressed that the interior was all made of wood instead of stone. I did climb all 150-plus wood stairs up the main tower, though I had to stop twice to catch my breath. 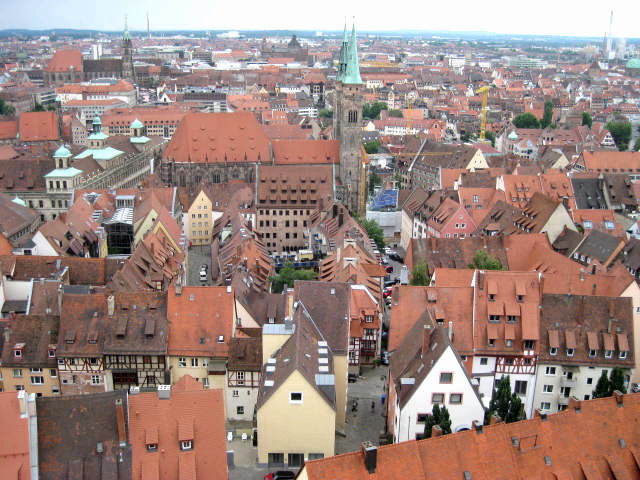 The view of Nuremberg, Germany from the top of the imperial fortress. 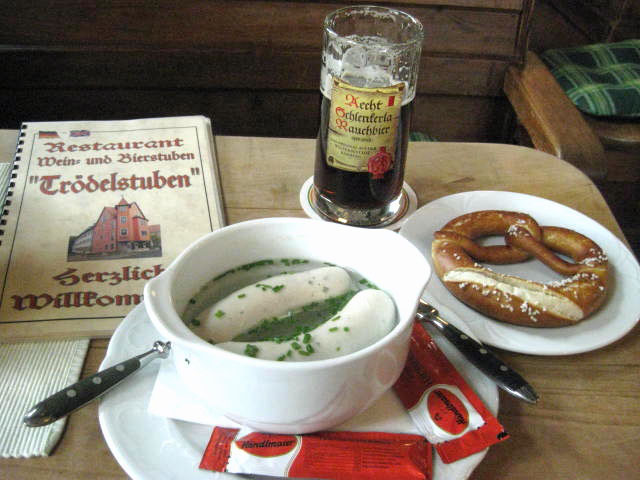 For lunch I scored another wonderful restaurant called Troedelstuben. This restaurant sits on an island in the middle of the Pegnitz River which divides the old town.

I had two Munich Weisswurst, a huge pretzel with brown mustard, and a dark rauchbier. Rauchbier [smoky beer] is made by toasting the hops before making the beer. It has been so long since I'd had one and this one was excellent. The best Rauchbiers seem to come from north of Nuremberg, from Bamberg and Coberg.

White sausage is originally a Munich dish; the local sausage would have been a "Nürnberger Funf", which means 5 Nuremberg style sausages which are slimmer and darker than the Munich white sausages.

After lunch I visited the former leper hospice-then-wine warehouse-now a Restaurant. It's called the Heilg-Geist-Spital, or "the Holy Ghost Hospital", and also sits on the Pegnitz river right in the center of the city.

I did a thorough exploration of Albrecht Durer's house. He was making copper plate prints while da Vinci was painting the Mona Lisa.

I wandered a bit in the main market square and found the souvenir shop to end all shops. If you can't find your chatski there, it doesn't exist.

It had been a busy day and it was just beginning to sprinkle so I returned to my pension. Later I went back to Brown’s Coffee to use their WIFI and enjoy a good crumb cake. It was an adventurous first day in Nuremberg.

It’s a little crazy how I happened to visit Nuremberg, Germany.

I was scheduled to go to Laubach in Hesse, Germany, for Englischhausen, a program run by Diverbo.com – they have programs in Germany and Spain – in which natives spend a week totally immersed in English. They must speak only English in conversation, on the phone, during meals, even in their dreams! That’s where we Anglo volunteers come in.

Every hour we are paired with different natives to keep them talking in English, to correct them, and to make it fun and interesting for them. The natives already speak English very well but this immersion process really drives it home.

I’ve been volunteering with this program for a number of years. It is basically a free vacation. Diverbo.com takes us all out to a resort to get the natives away from their work and/or usual environment.

We Anglos get free room and meals for the week and best of all, we get to know some fabulous native people and develop real friendships.  All we volunteers pay for is our airfare, and I always figure as long as I am paying for airfare, I may as well schedule a few days before the program to go exploring on my own.

Condor flies direct from Seattle to Frankfurt, in the middle of Germany. From there I could take a train to anywhere. Last year I took a train to Berlin for a couple of days. This time I thought about Prague in the Czech Republic.

Then a friend I had met at Englischhausen the year before suggested we do a little wine tasting in Germany before the program. I’ve never turned down an opportunity to research wines!

I tried Wurzburg but my credit card was due to expire before I would get there. By the time my new card arrived, the vacancy was filled.

So I turned to Nuremberg for my pre-program exploration and my friend said she would pick me up from there for a day in the German countryside.

Janice Van Cleve is an archeologist, and guest lecturer on tours who has published several books on the Maya.