A Pilgrimage to Terezin

On a crisp, cloudy day in spring, there are still patches of snow on the grounds. Sixty kilometers from Prague in today’s Czech Republic, this is the Terezín Memorial.

It’s just an hour by comfortable bus to reach this place, known during in World War II as Theresienstadt. From 1940 to 1945 it was a Nazi transportation camp.

The Small Fortress that is the center of the site was constructed in the 18th century under Emperor Josef II. Named after his mother, Maria Theresa, it was designed to protect access roads leading to Bohemia. Before the fortress became a police prison of the Gestapo, it served as a military jail for political opponents to the Hapsburg monarchy. 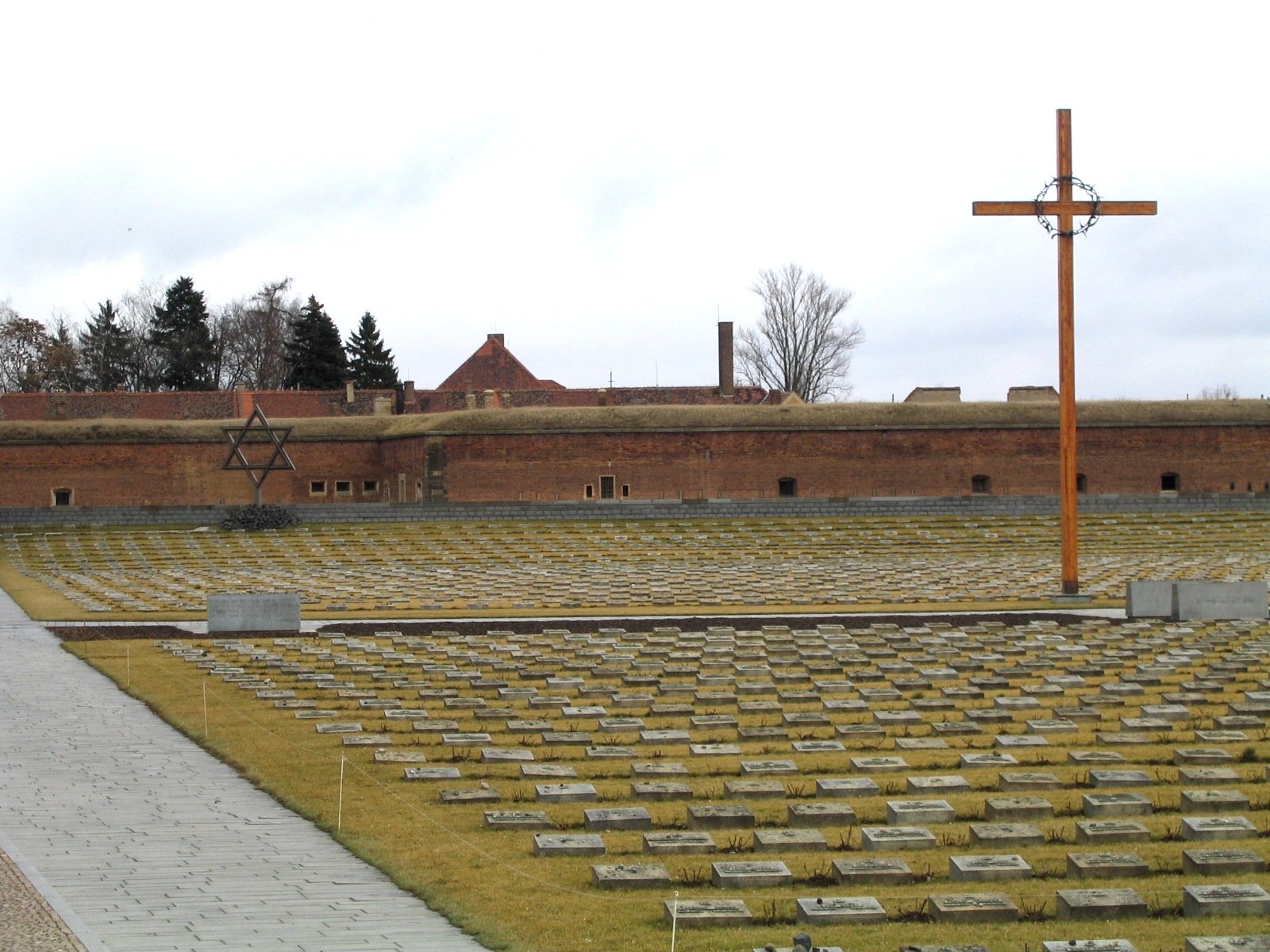 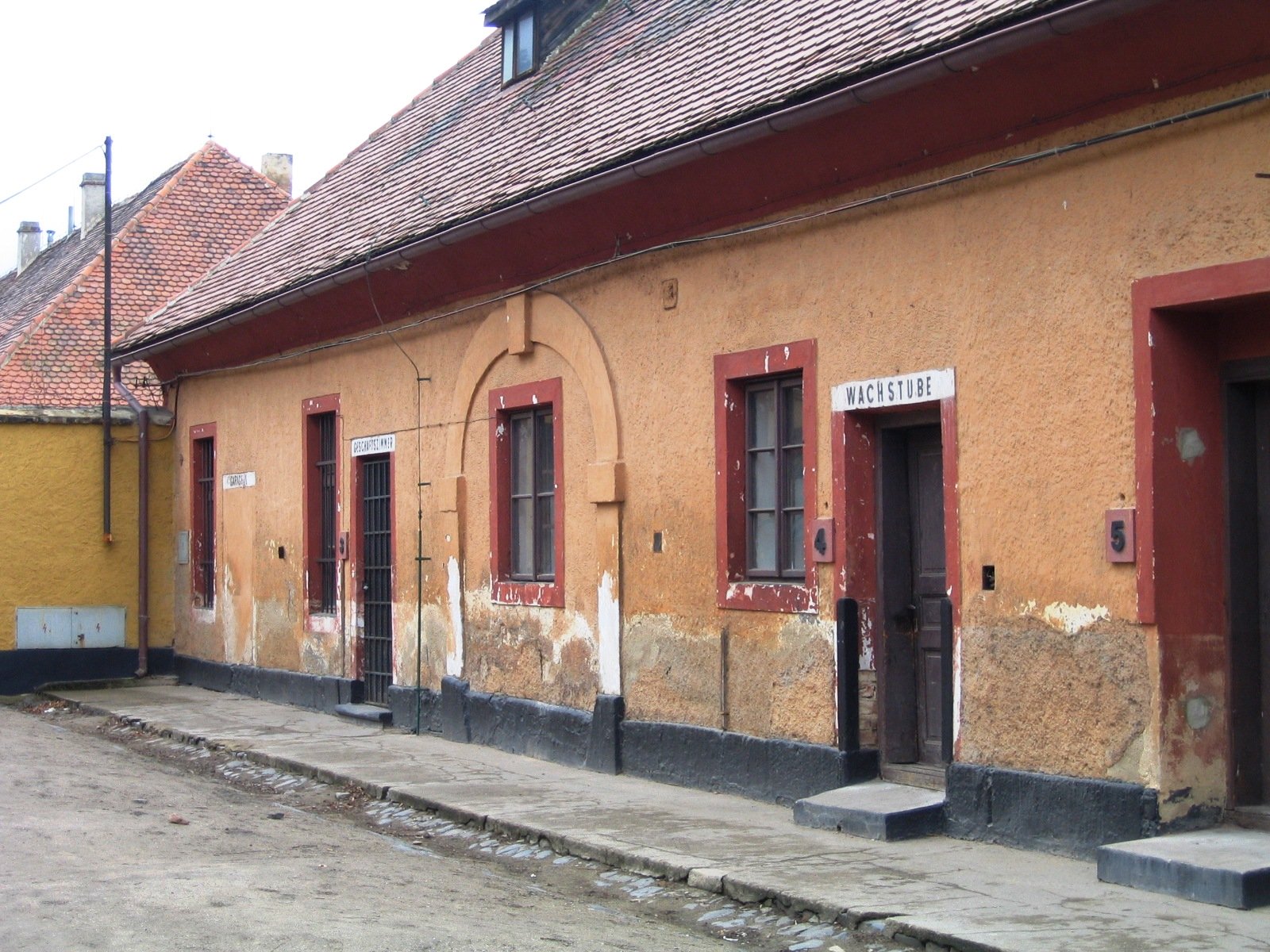 The administrative offices at Terezín

By 1939 Nazi Germany occupied all of the Czech lands.

Their goal was complete Germanization of Czech lands and people.

Between 1940 and 1945 more than 1,500 Jews were imprisoned in the Small Fortress. Because Terezín was a transition camp, most prisoners were not kept for long.

About 500 Jewish prisoners were tortured to death here. Most of the men perished after deportation to concentration camps Buchenwald, Auschwitz, Flossbürg, and Mauthausen (women went to Ravensbrück).

Non-Jewish prisoners were sent to courts of justice, prisons or executed. Between 250 and 300 death sentences pronounced by the Nazi courts of justice were carried out between the ramparts in the former military shooting range.

Our Terezín guide is a woman of middle age dressed in a well-tailored, grey wool coat with fur trim, gloves and a fur hat. Her face is expressionless as she talks about how 27,000 men and 5,000 women, mostly Czech political prisoners, were handed over to the Terezín prison by Gestapo officials.

“The reason given was ‘resistance against Nazism’,” she says, her voice sober. “Foreign prisoners included several hundred Soviet and British prisoners-of-war.” 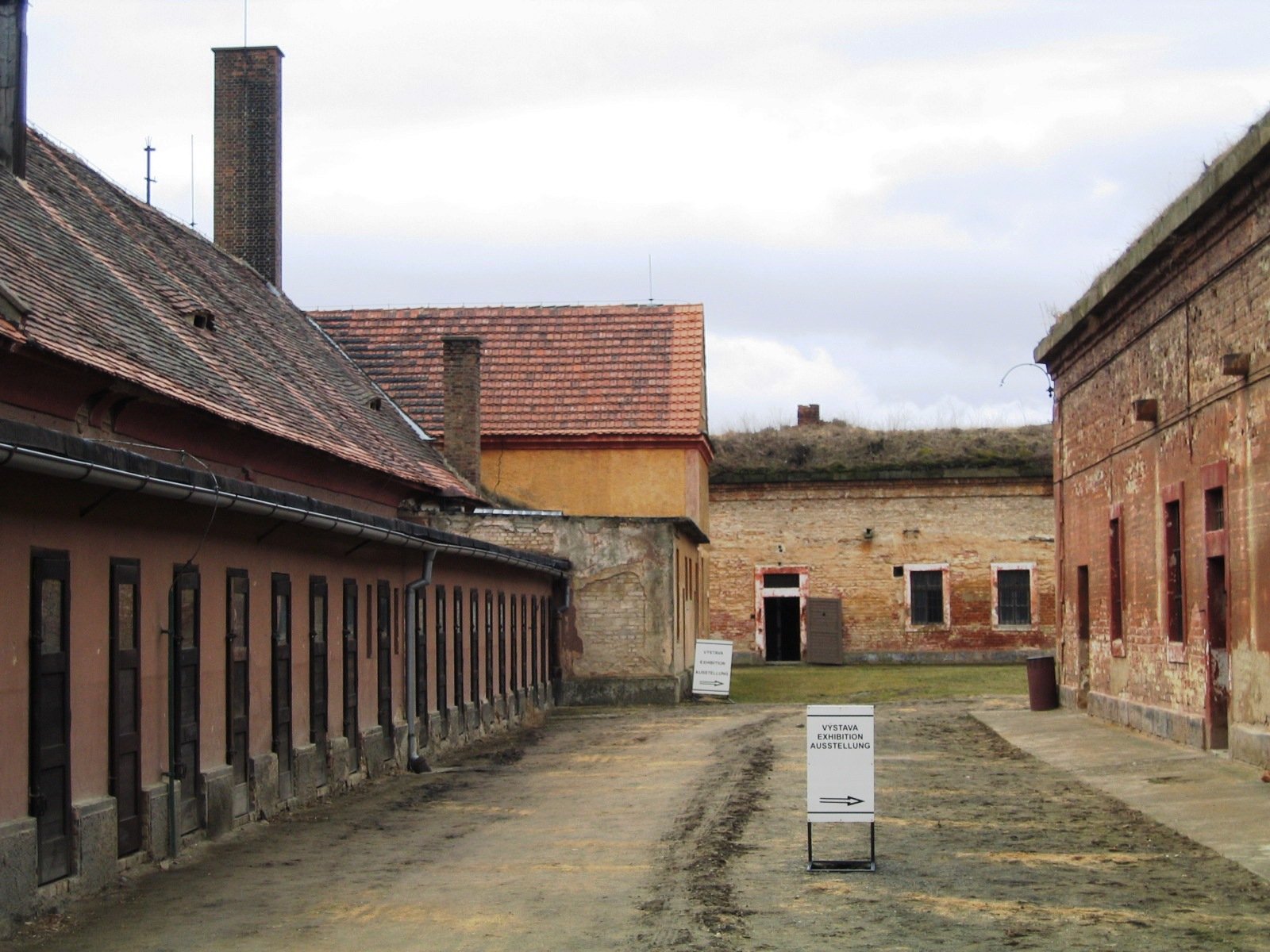 The administration courtyard at Terezin

Upon a prisoner’s arrival at Terezín, an initial reception procedure was held in the administration courtyard.

After documents, valuables and clothes were handed over, the prisoner received a mess-tin, spoon, and blanket. Both men and women were allowed to keep the personal underwear they wore, but otherwise were given prison garb. Food consisted of a small daily ration of bread, two dippers of weak coffee and a main meal of a watery vegetable soup.

Everyone past the age of 13 had to work. Labor assignments generally included construction work or agriculture. Labor gangs worked on nearby roads and in a nearby Limestone mine. Women worked in the fields and cared for cattle, made or mended clothing, and even painted wooden buttons. 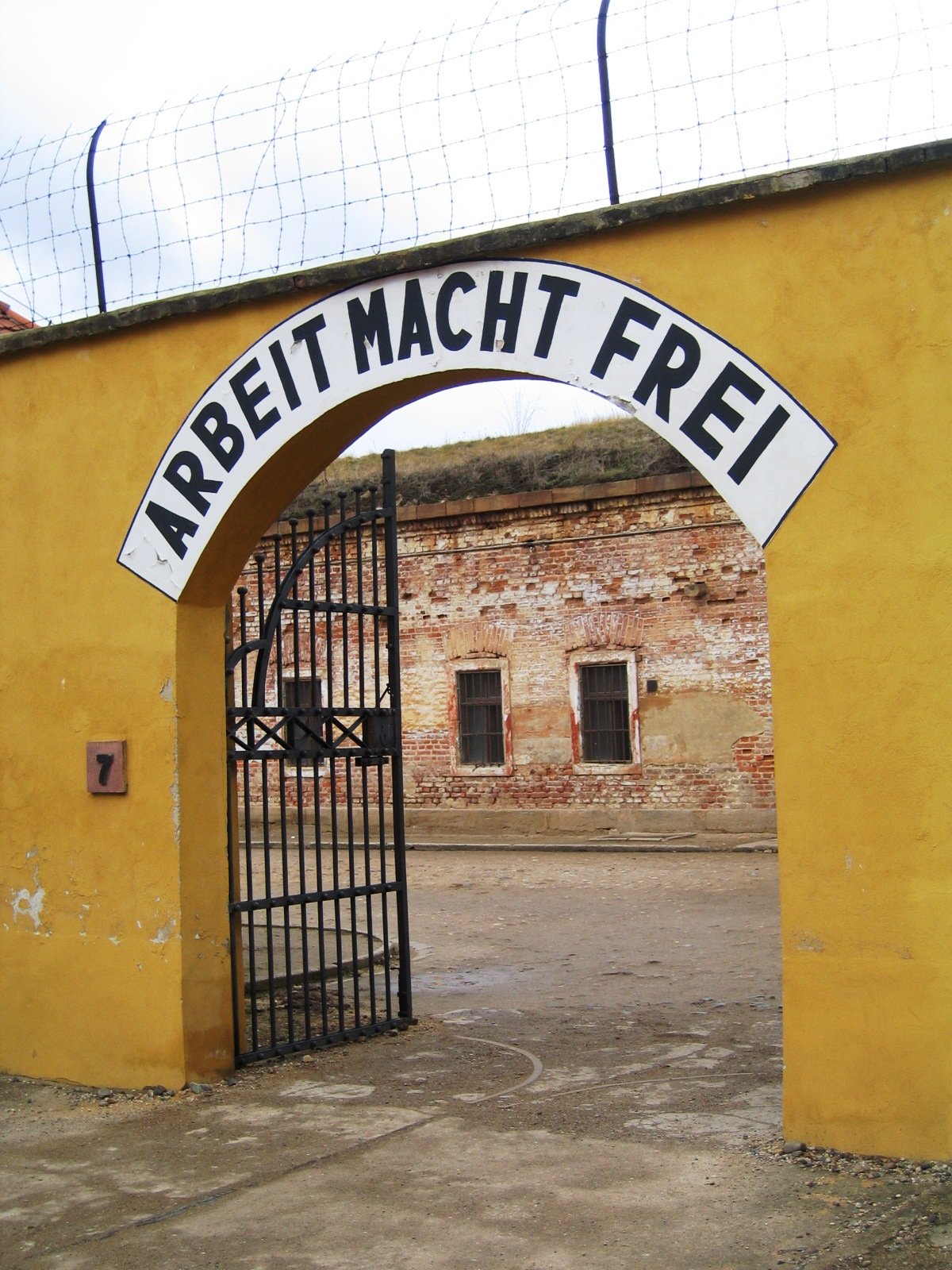 A model camp, under an archway that says, “Work Makes Free”

The nearby village of Terezín was established as a model camp that could be shown to foreigners. The Nazi plan for the Terezín Ghetto was to provide an image of a “self-governed Jewish settlement area” to hide the reality of the “Final Solution of the Jewish Question.” 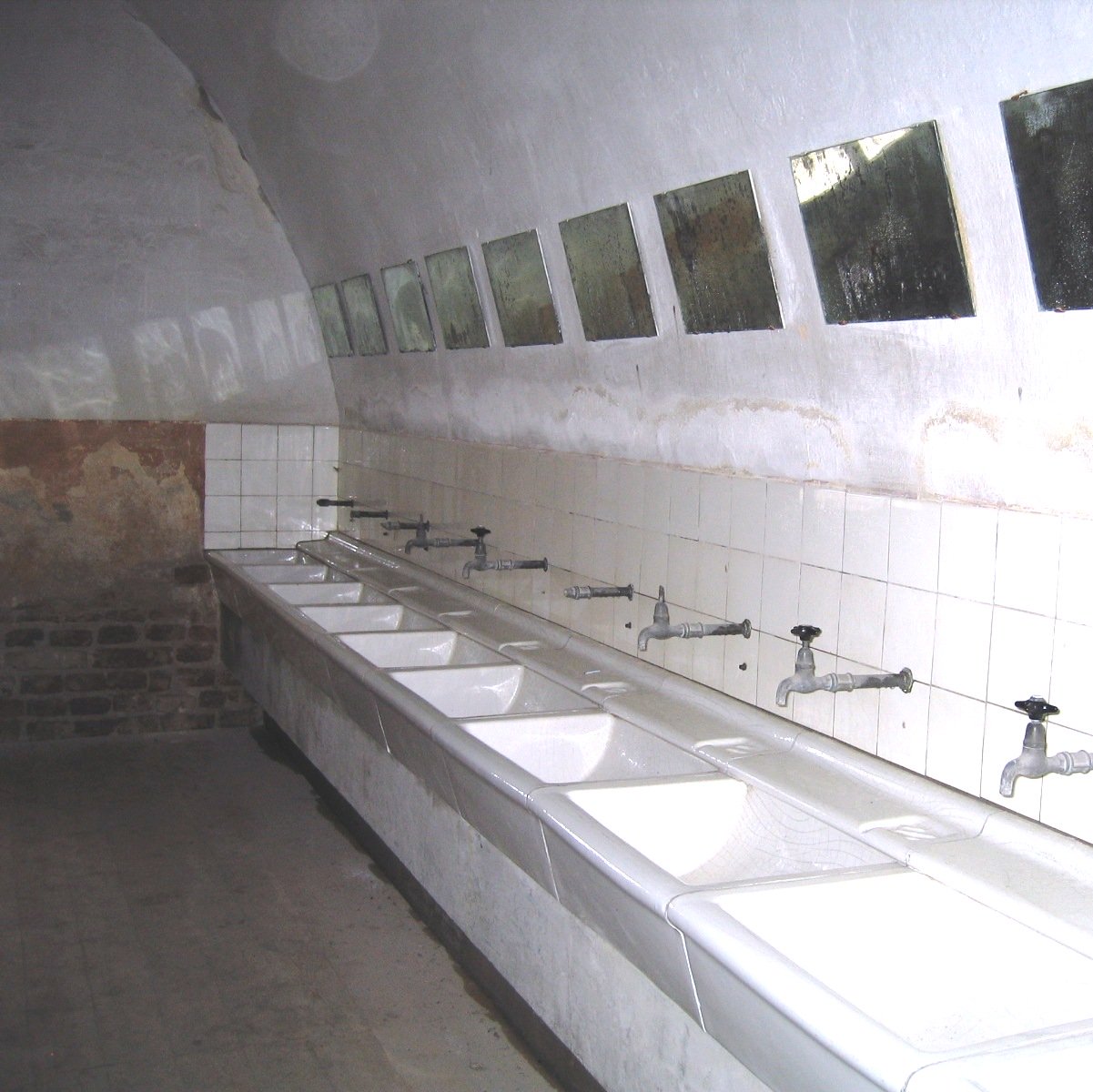 For a scheduled visit to the Ghetto and Small Fortress by international Red Cross representatives, a model “prisoner washroom” was built, but it was never used by prisoners themselves.

Activities in this Jewish Ghetto were restricted by Nazi administrators.

Our guide explains that much of the commerce of the Ghetto was designed “to provide an upper-class lifestyle for the administrators and their families.”

In the beginning out-going mail from the Small Fortress, though heavily censored, was allowed. Incoming packets from friends and relatives, including small amounts of money, were also allowed, but often stolen by guards. Still, illegal messages were passed on by people living in the vicinity of Terezín.

According to our guide, conditions for Jews in the Small Fortress were the worst of all; they were brutally maltreated and murdered by their warders. 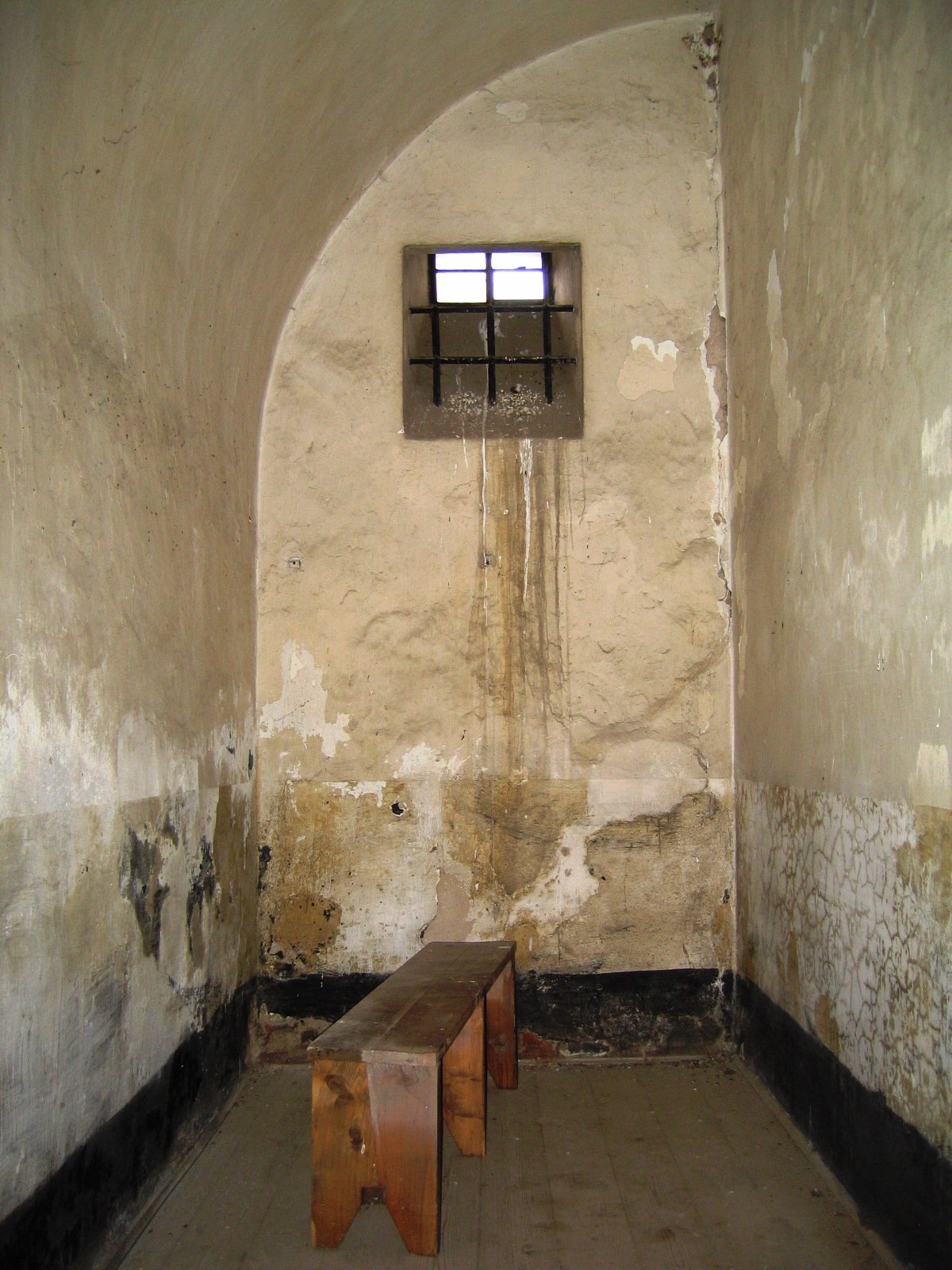 “The cells became severely overcrowded―as many as 600 prisoners in a room with three-story wooden sleeping bunks designed for 100. They were lice-infested, and the one toilet was inadequate. Sometimes there was as much as four inches of liquid backed-up on the floor of the cell.”

Heavy labor and living in overcrowded cells with insufficient food and hygiene resulted in deteriorating health. Cells were insufficiently heated and rations of coal grew smaller each year.

It’s a sobering thought to imagine being poorly dressed in one of these crowded rooms in the Czech winter with no heat. With no sick-bay, the ill remained in their cells and infectious diseases like tuberculosis quickly spread. The dead were cremated in a crematorium constructed for the purpose.

By the time Soviet troops arrived at Terezín in 1945, the prison was experiencing a rampant typhus epidemic; it ultimately claimed the lives of several dozen Jewish, Czech, and Soviet doctors and nurses. 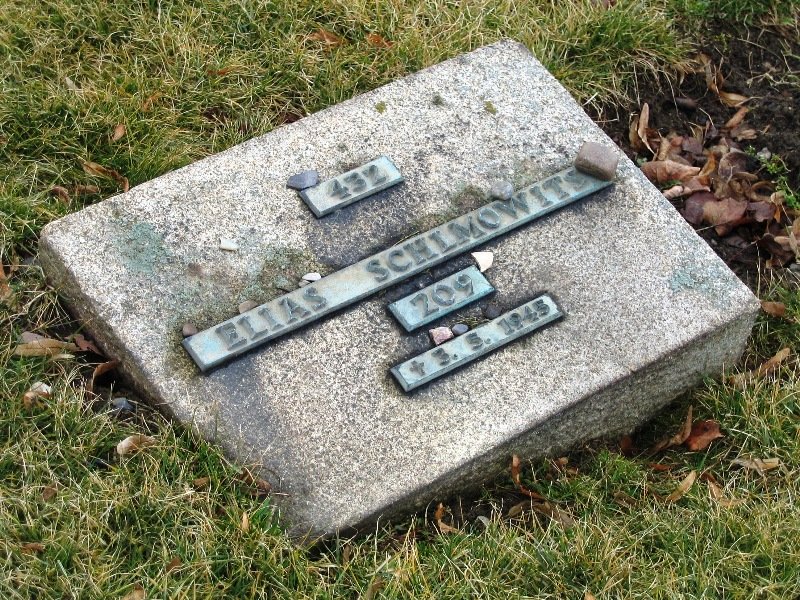 After the war, Terezín became a pilgrimage place for Czech people.

A National Funeral exhumed victims from the prison and remains of victims were re-buried in the National Cemetery, established in 1945, in front of the Small Fortress.

In November 1944 prisoners had been ordered by the SS to throw into the river the ashes of 22,000 victims cremated in the Ghetto Crematorium. Nearby, on the bank of the Ohře River, there is another memorial.

The Terezín Ghetto Museum houses a permanent exhibition, a movie theater, a study room, and a revolving exhibit space. There is a permanent Art Exhibition of drawings and poems created by the children who were incarcerated there. Of 15,000 children who passed through Terezín, only 100 survived.

Today, visitors from all over the western world come to see the historic site and permanent exhibition of the Terezín Memorial.

“We have many people who come to visit Terezín,” says our guide. “They want to see where their relatives were kept … they have family who were here.”

All good reasons for a pilgrimage to Terezín.