A day out at Seattle Woodland Park Zoo

For over 100 years, Seattle’s Woodland Park Zoo has been a cherished community resource and a unique urban oasis. With 92 acres and award-winning exhibits divided into bioclimatic zones, it was a good thing the gift shop (my first stop) handed out a free map! 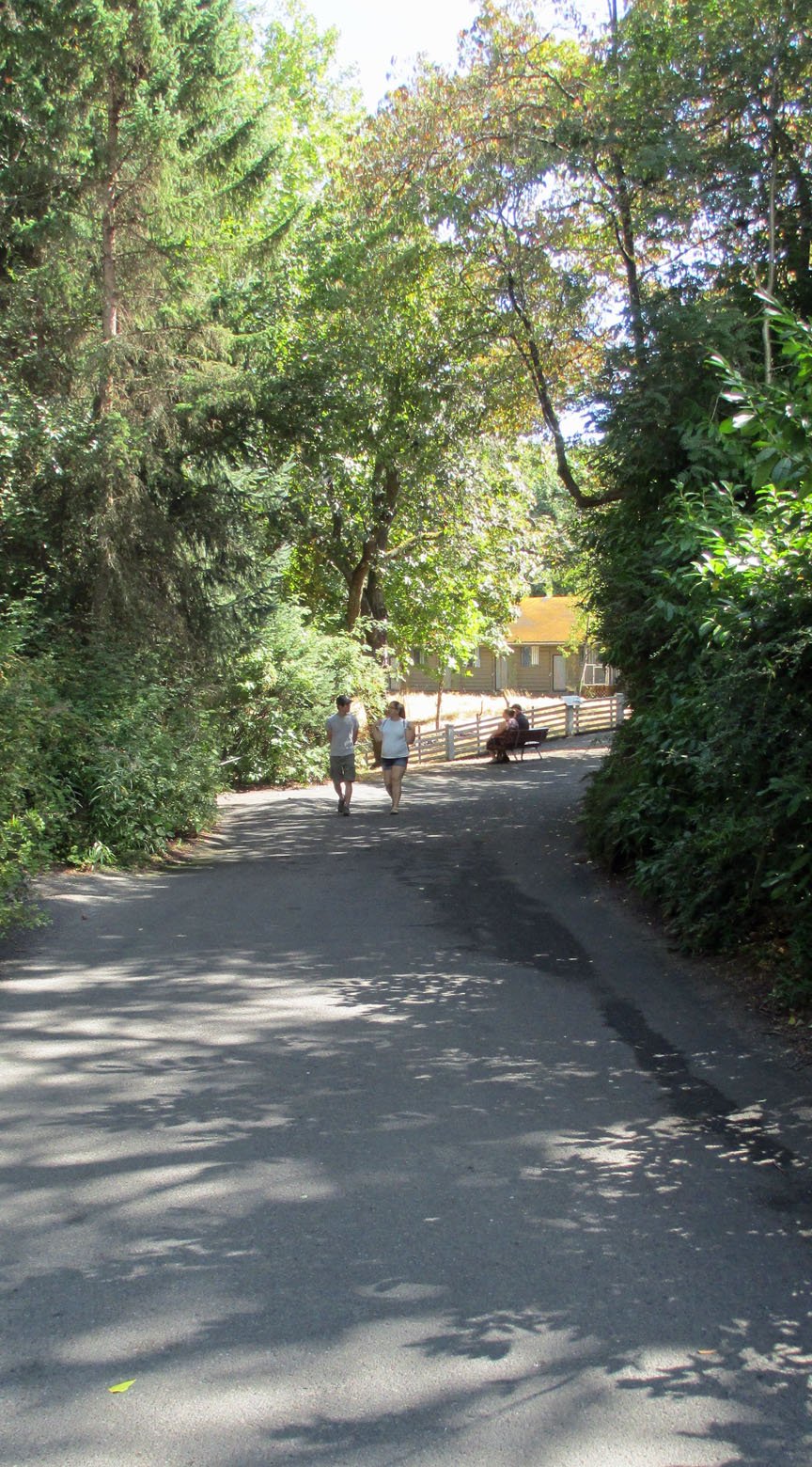 With a new enlightenment and the societal advances of recent past decades, animals whose species are endangered worldwide can live long, healthful lives in a spacious, natural habitat designed to mirror their native homes. This reflects the Woodland Park Zoo’s mission “to save animals and their habitats.” 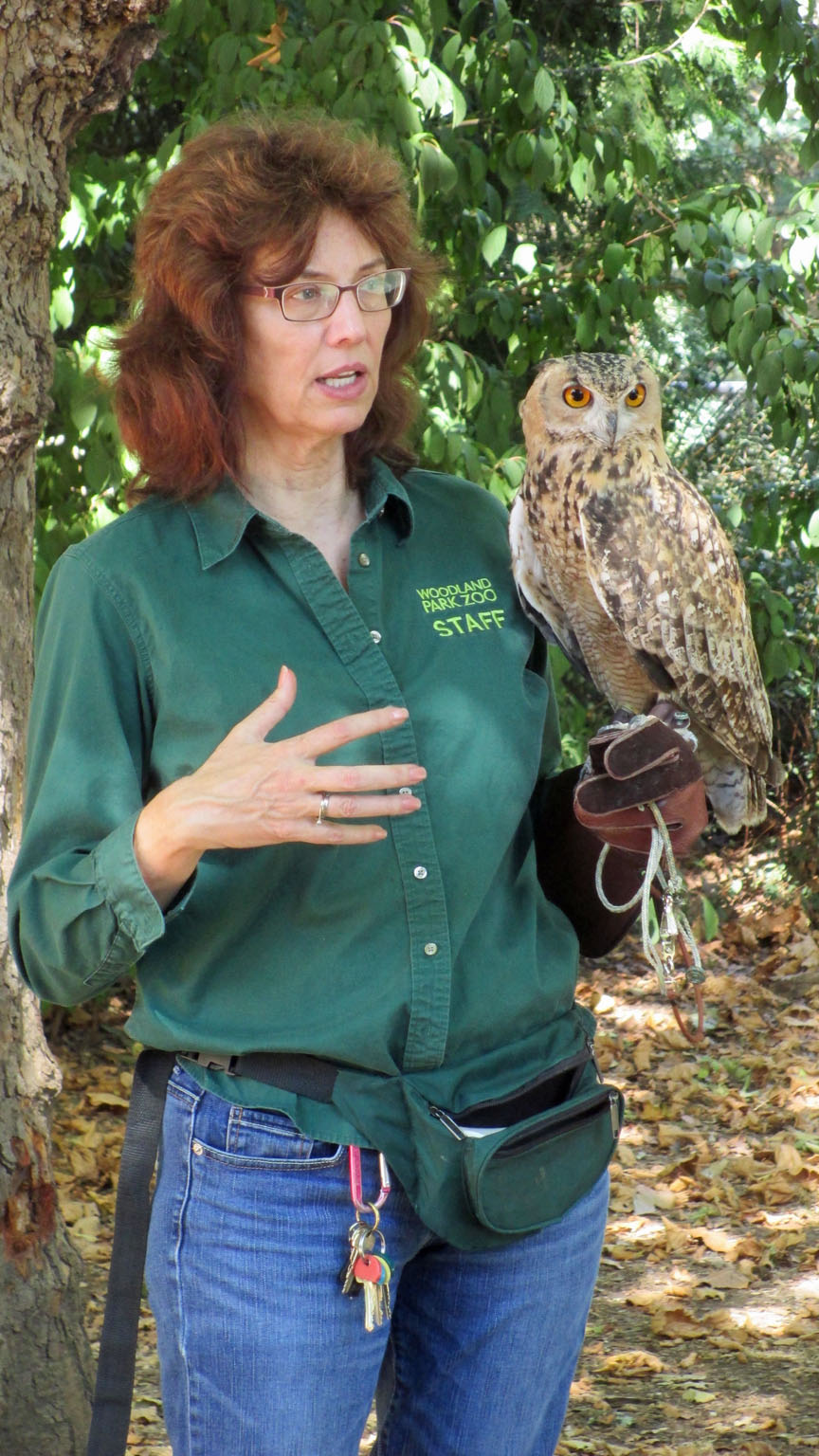 Our first “animal” encounter was with Interpretive Engagement Specialist Karen Ofsthus holding an owl native to North Africa. She engaged a young visitor by asking him, “Do you like to eat mice?” From there she explained in an easy-to-understand manner about what owls eat. 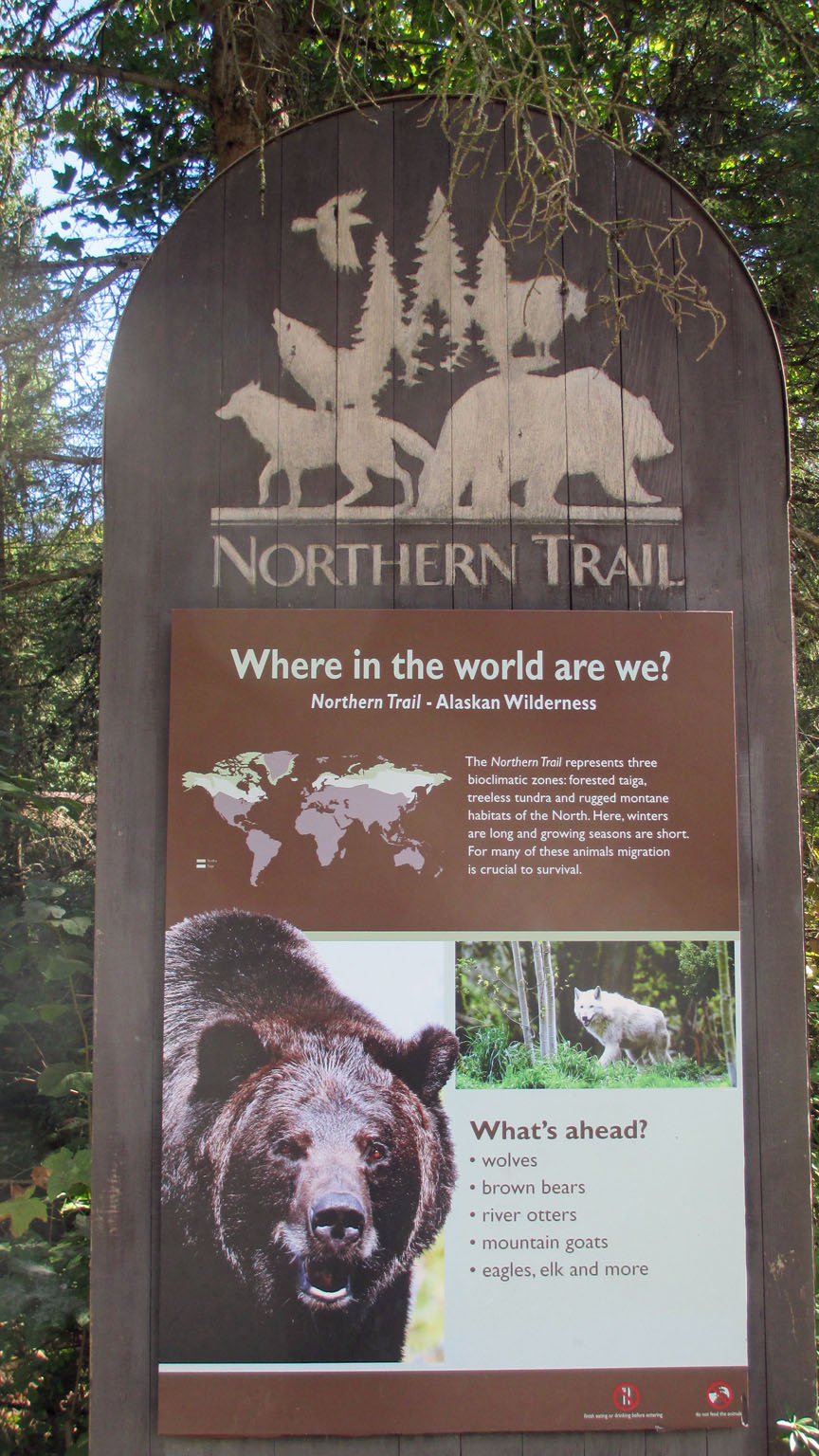 Signage for the Northern Trail section of the zoo explained that in the bioclimatic zones of the north winters are long and growing seasons are short.

We learned that Tundra is a Finnish word that means “land without trees.” But actually there are trees there, stunted, slow-growing trees because of the scarcity of water, constant wind, shallow soil and short growing season. Dwarf birches, alders and willows rarely grow taller than 18 inches!

“When a pine needle falls in the forest, the eagle sees it, the deer hears it, and the bear smells it.” Native American saying 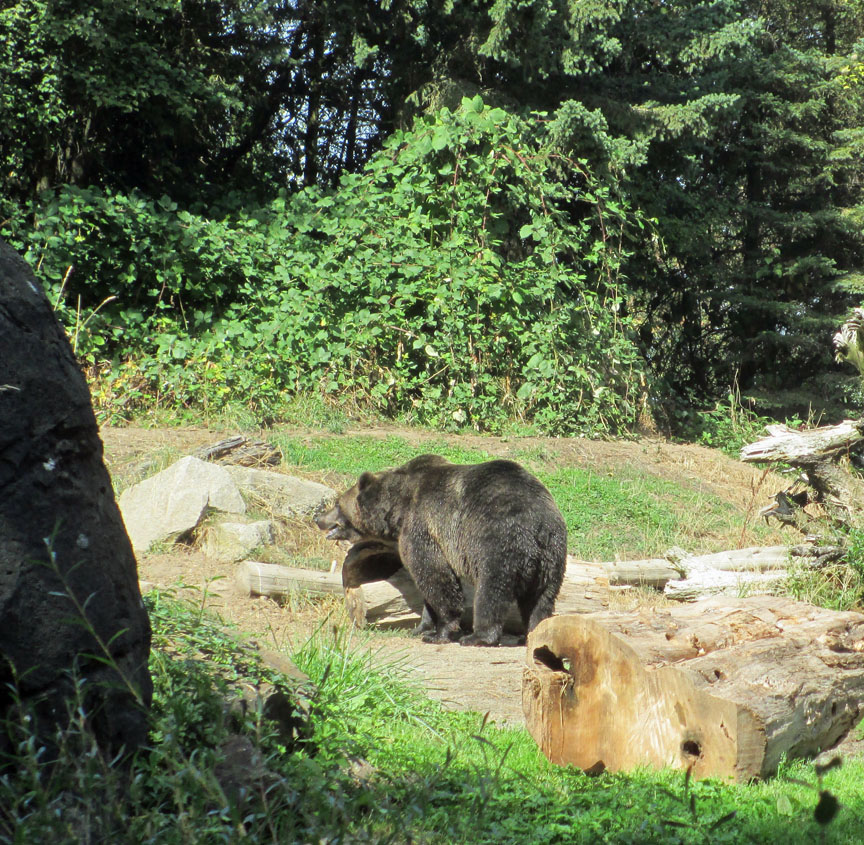 The spacious brown bear enclosure made me feel that I could imagine seeing this big guy in the wild.

We learned that brown bears actually eat more vegetation—lots of roots and insects— than meat. That’s an amazing diet, since they can weigh over 1,000 pounds! 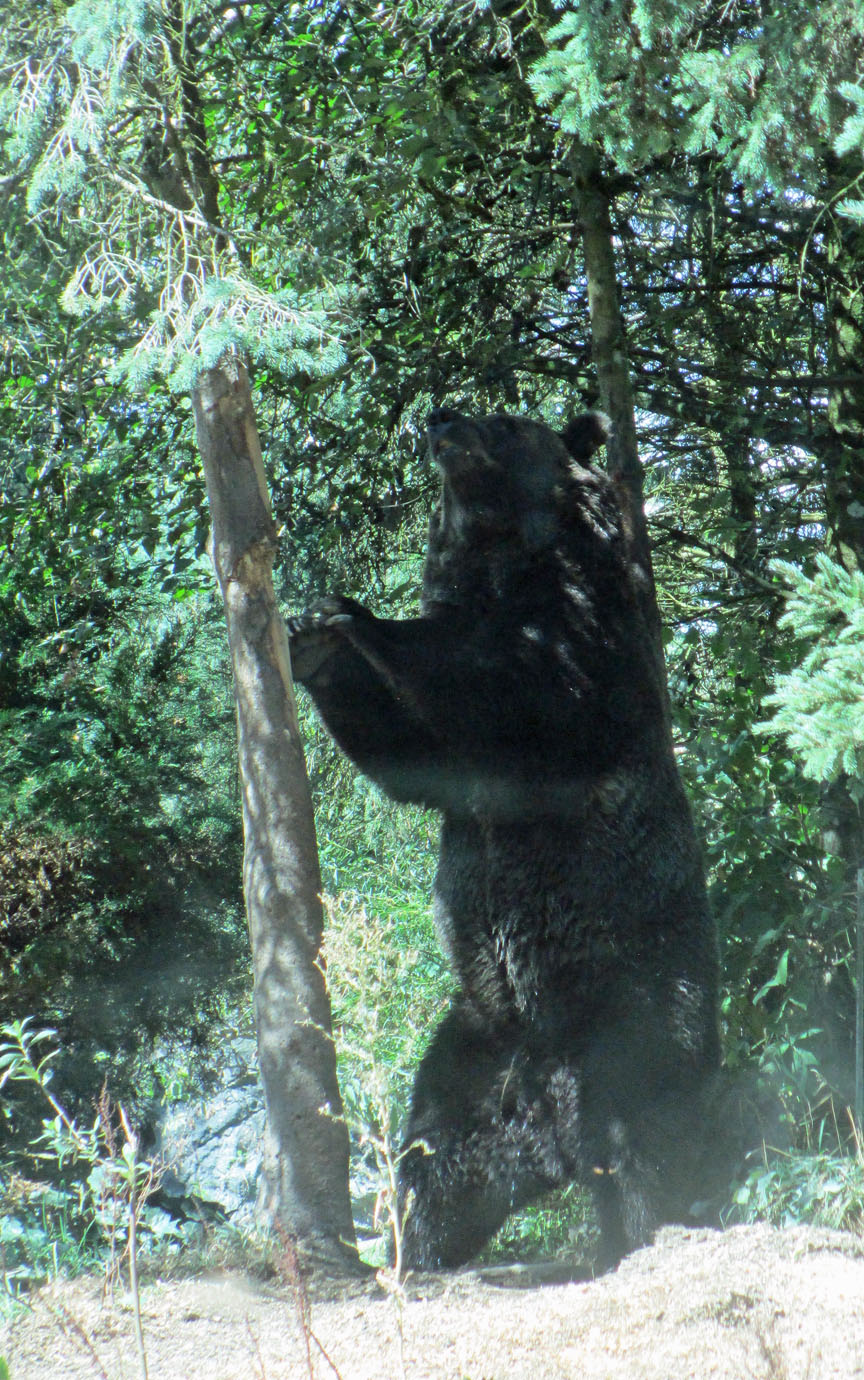 Caught this brown bear standing up, scratching his back against a tree trunk. What a life!

Next we checkout the river otters, swimming and diving behind a huge glass wall. I’ve always loved the playfulness of otters, but those guys move waaaay too fast to be captured in most people’s phone photos. 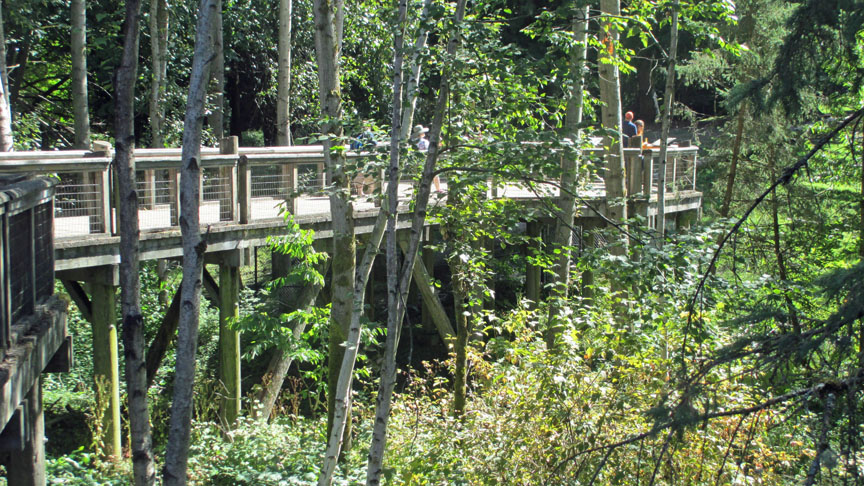 What would a park in the Pacific Northwest be without trees?

Since the late 1950s the zoo has nearly quadrupled the number of trees on the grounds, gradually regaining a forest canopy. The 92 acre Woodland Park Zoo now boasts a 49% canopy cover, offering shelter and food for dozens of native and migratory birds and other wildlife as well as climbing, shade and even food for some of the zoo residents. 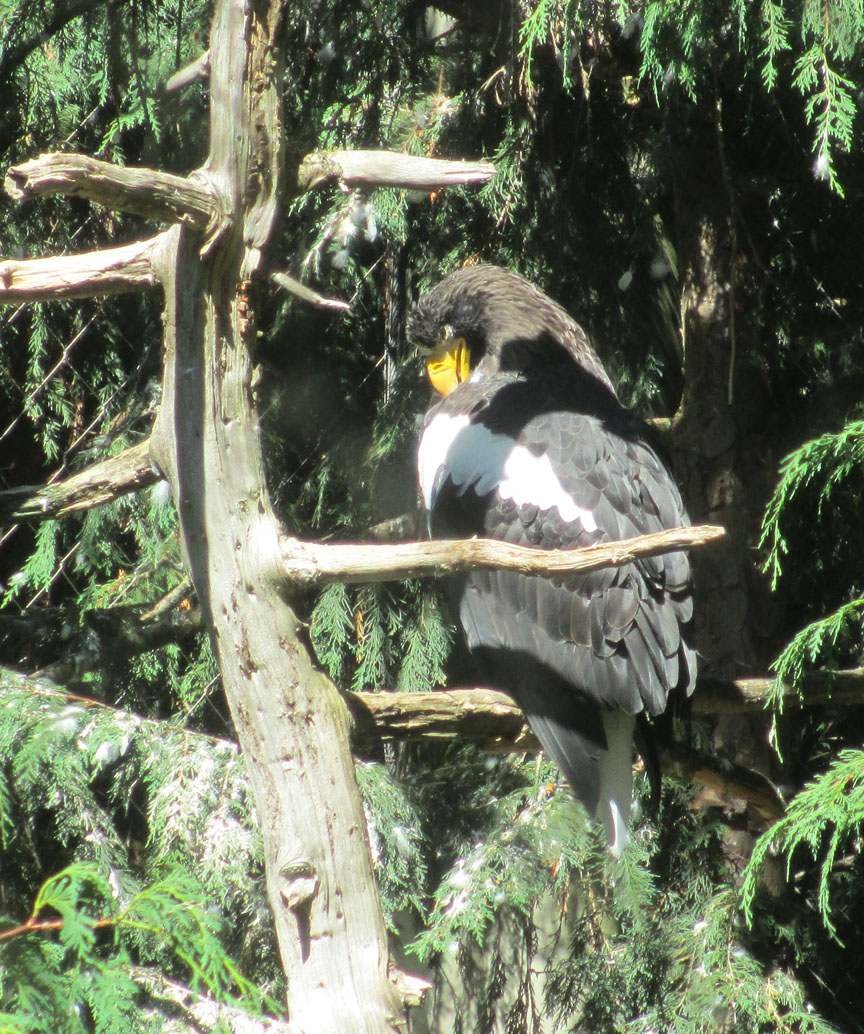 The Steller's Sea-Eagle is the Russian counterpart to the North American Bald Eagle.

They’re native to the remote northeast coastal region of Asia, geographically mirroring the US Pacific Northwest coast. Fewer than 5,000 of Steller’s sea eagles now exist in the wild.

The sea-eagle is threatened because of exposure to industrial chemicals, poisoning from lead bullets left in discarded animal carcasses, habitat disruption from dam projects, logging, oil and gas development in coastal areas and overfishing of their main diet, salmon.

Because the Woodland Park Zoo is so huge, and we have traveled in Australia, we passed the Australasia section and moved on to the African Savanna to see Komodo dragons, warthogs, meerkats, lions, gorillas, zebras, hippos and giraffes. 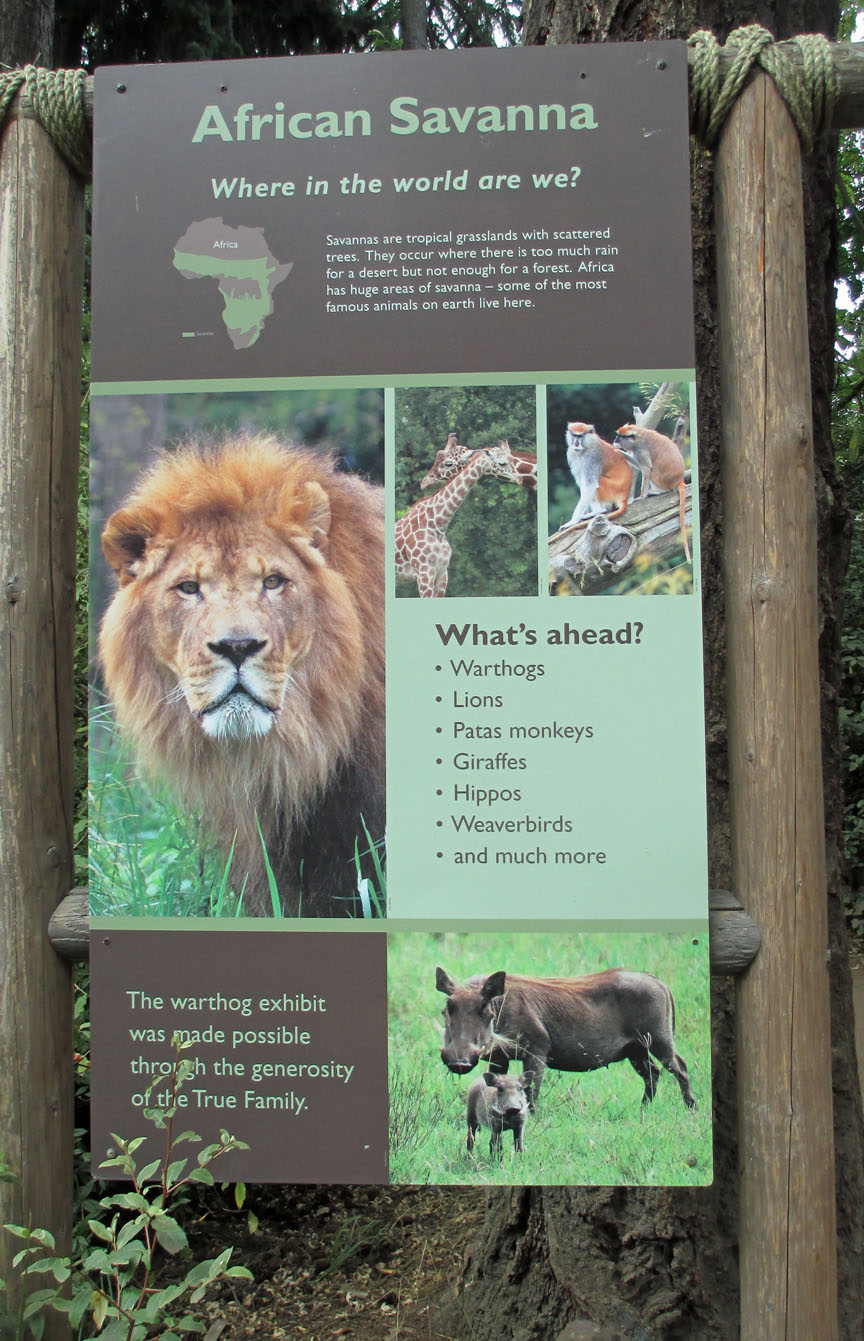 Asking the question “Where in the world are we?” the signage for the African Savanna explains that savannas are tropical grasslands with scattered trees.

This is where we would find warthogs, lions, Patas monkeys, hippos, weaverbirds and giraffes, including the zoo’s most famous new resident! 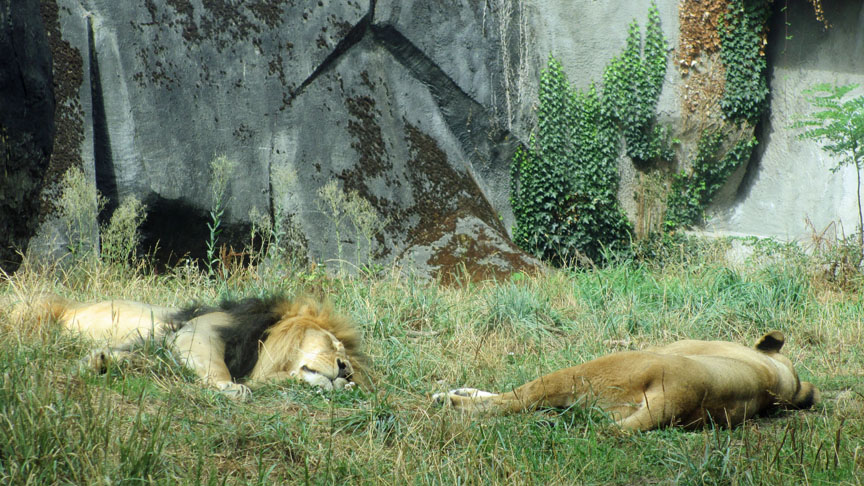 If you were a well-fed, contented lion, wouldn’t you sleep all afternoon, too?

While the lions were not interested in “entertaining” tourists, a nearby sign, “ Using domestic dogs to save wild lions” imparted interesting information:

“When a rancher’s livestock is threatened by cheetahs or lions, specially trained livestock-guarding dogs help deter the predators in a safe and non-lethal way. The Livestock Guarding Dog Program  with the Cheetah Conservation Fund in Namibia has since spread to other countries. The guard dogs are saving the lives of critically endangered carnivores - ranchers using the dogs report an 80% decrease in livestock losses, thus reducing the need for lethal retaliation!” 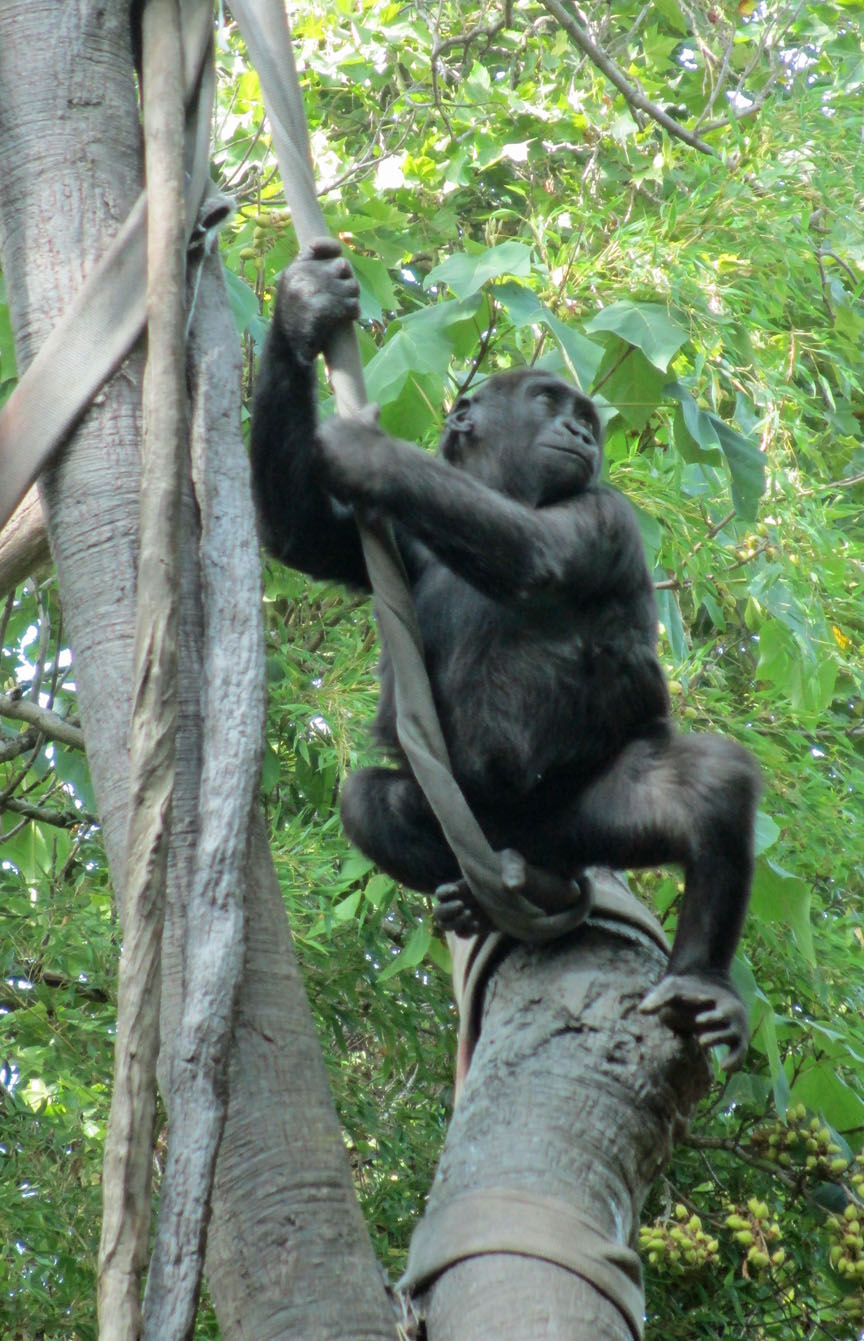 The gorillas were far more active than the lions. Especially the baby Yola, who cavorted all over the enclosure on man-made “jungle jims.”

While scientists work to develop vaccines that protect gorillas from Ebola, the Seattle Woodland Park Zoo participates in the Bushmeat Crisis Task Force, an international alliance working to eliminate the commercial bushmeat trade. 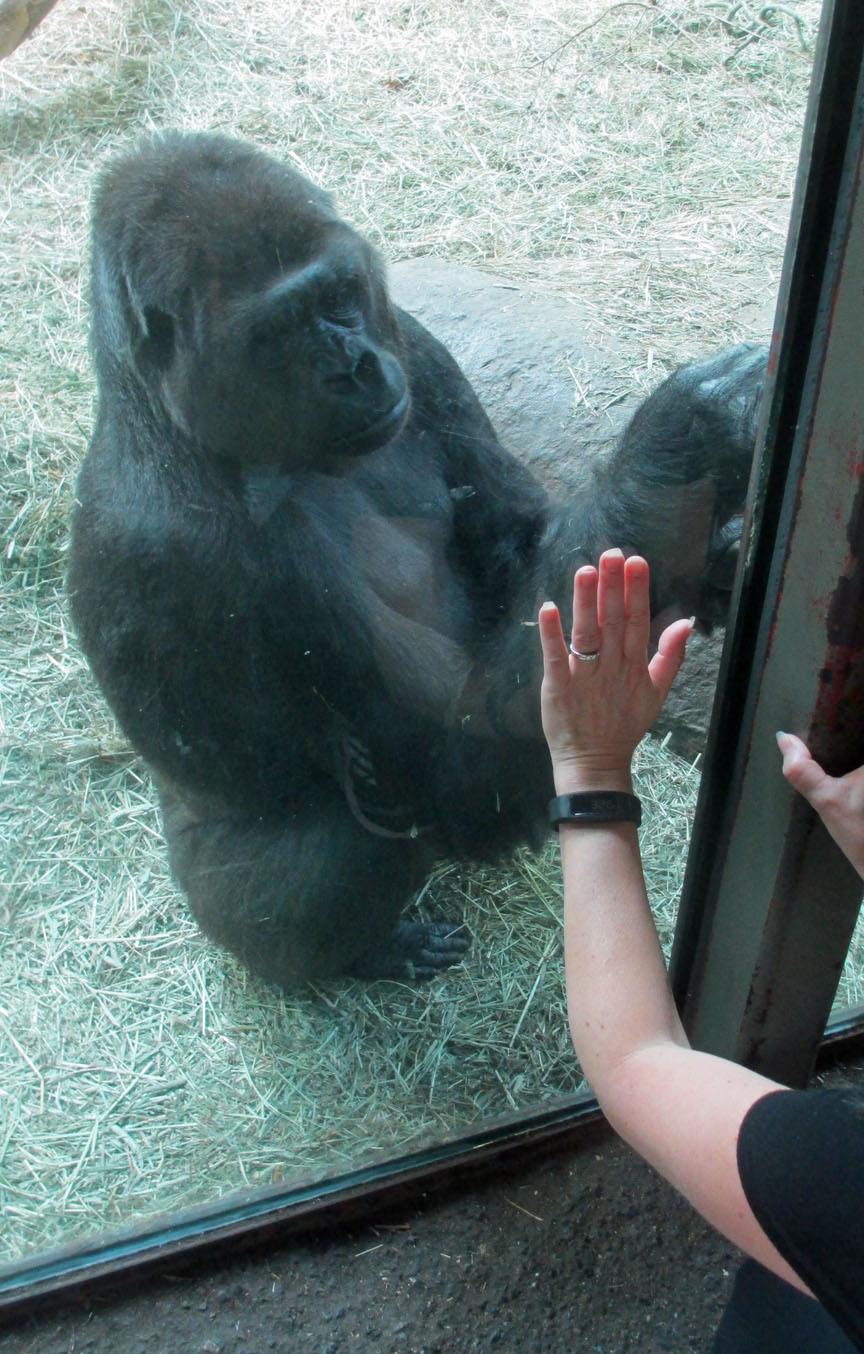 Glass barriers like this in zoos are usually one way. Perhaps Yola sensed a friendly hand on the other side.

World Gorilla Day, September 24, asks people from all over the world to celebrate these amazing animals and take action to protect endangered gorillas in the wild and save their ever-shrinking natural habitat. 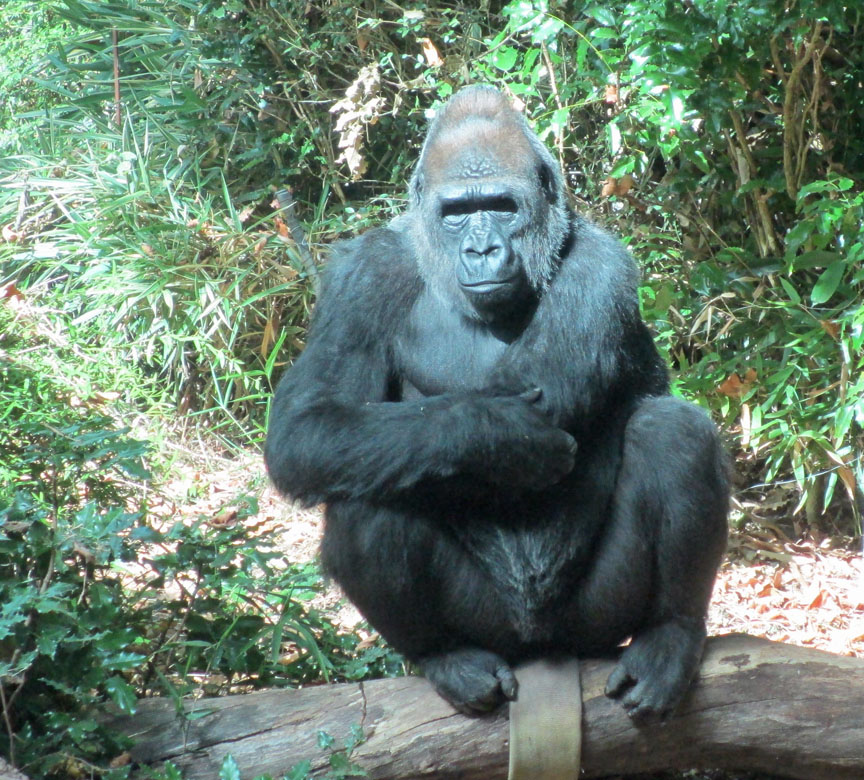 “Enrichment” at the Woodland Park Zoo.

While animals in the wild need to find food, shelter and make nests, zoos are adding enrichment, the activity of play.

This can improve the success of captive breeding of endangered species, and most zoo animals today are born in zoos.

Zoo visitors can observe natural behaviors like playing, foraging and exploring. Sometimes food is even hidden to encourage an animal’s natural exploratory nature.

Both physical and mental activities are important for healthy and happy animals interested in the world around them. 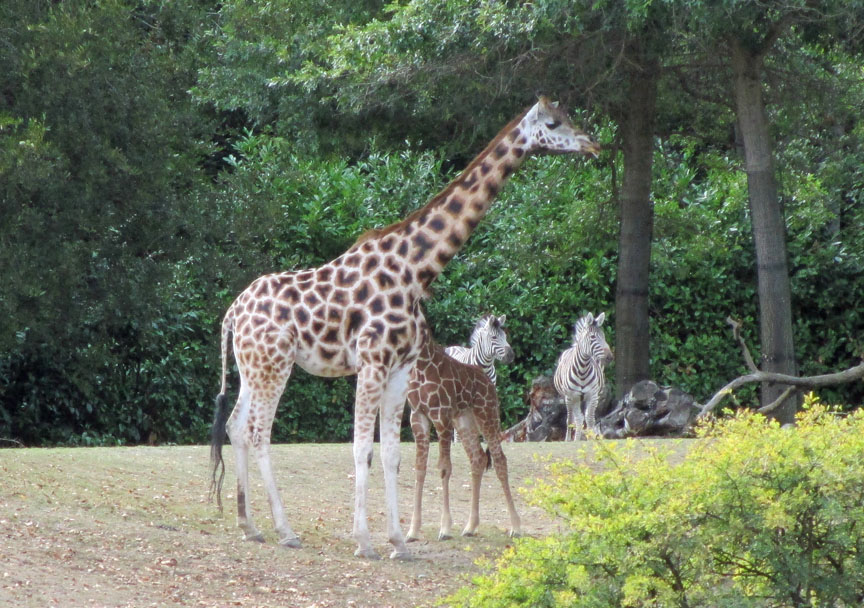 Less than 3 months before, the zoo’s Reticulated Giraffe Tufani gave birth a little 5-foot 9-inch girl, Lulu. This name means “pearl” in the African Swahili language. This size is typical for newborn giraffes, and mom can be up to 18 feet in height.

In the grassy savanna, Lulu galloped all over the place while Tufani kept a watchful eye. When other giraffes came closer, she positioned herself between them and her baby.

Giraffes can protect themselves from predators by running at up to 35 miles an hour, and can kick hard with its sharp hooves. 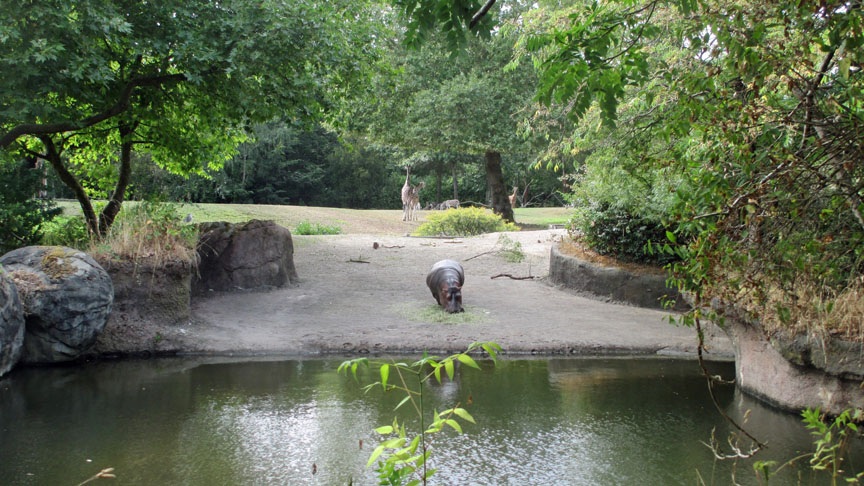 The giraffes share this large, grassy savanna with zebras and hippos. 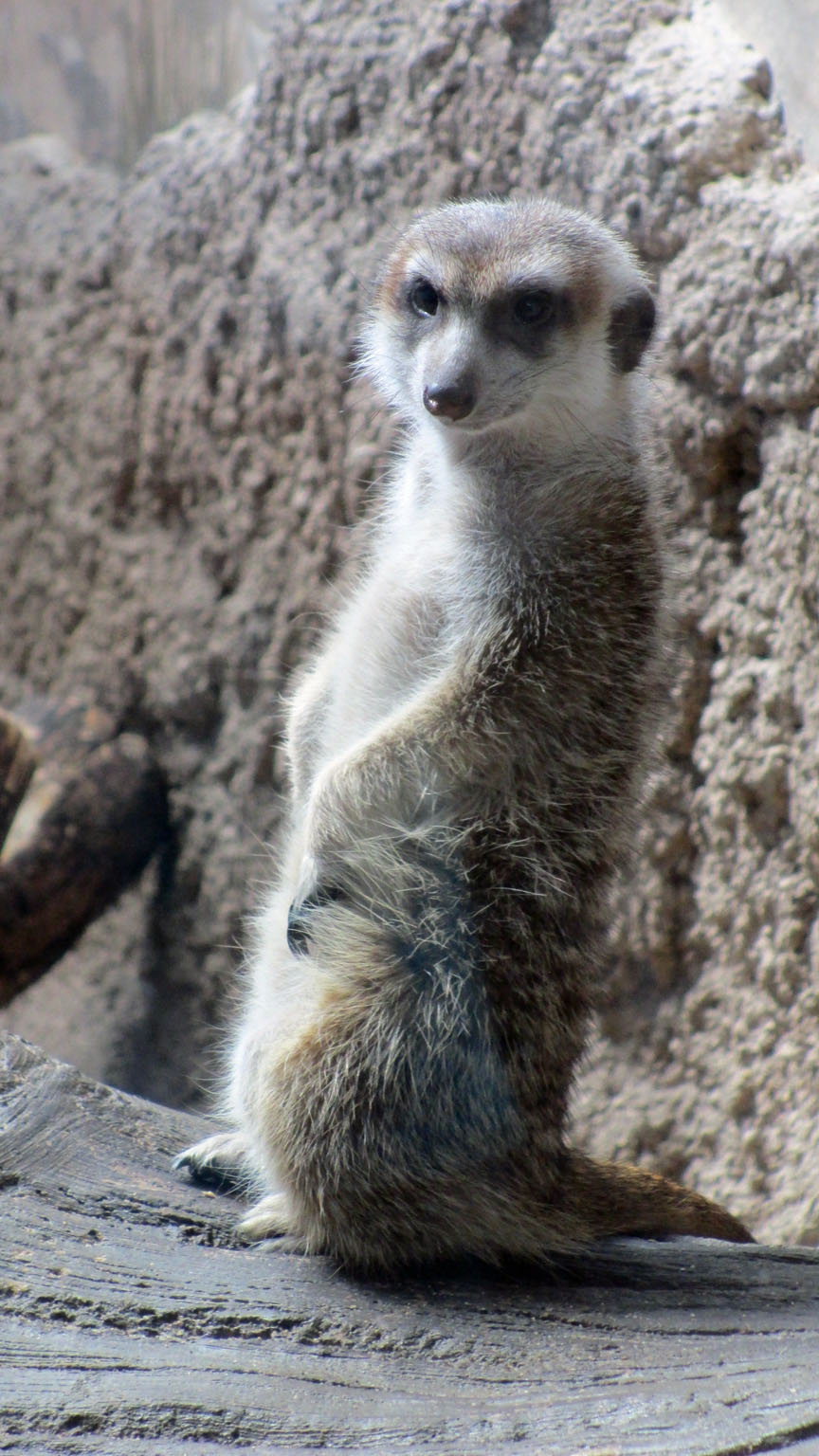 We’ve been huge fans of those cute little meerkats ever since binge-watching the tv series “Meerkat Manor.”

I imagined this little guy saying, “So, what’re YOU lookin’ at?”

A sign above a man-made mound says,“Live Like a Meerkat. Dig a Good Home! Find Lots of Food! Work Together!” 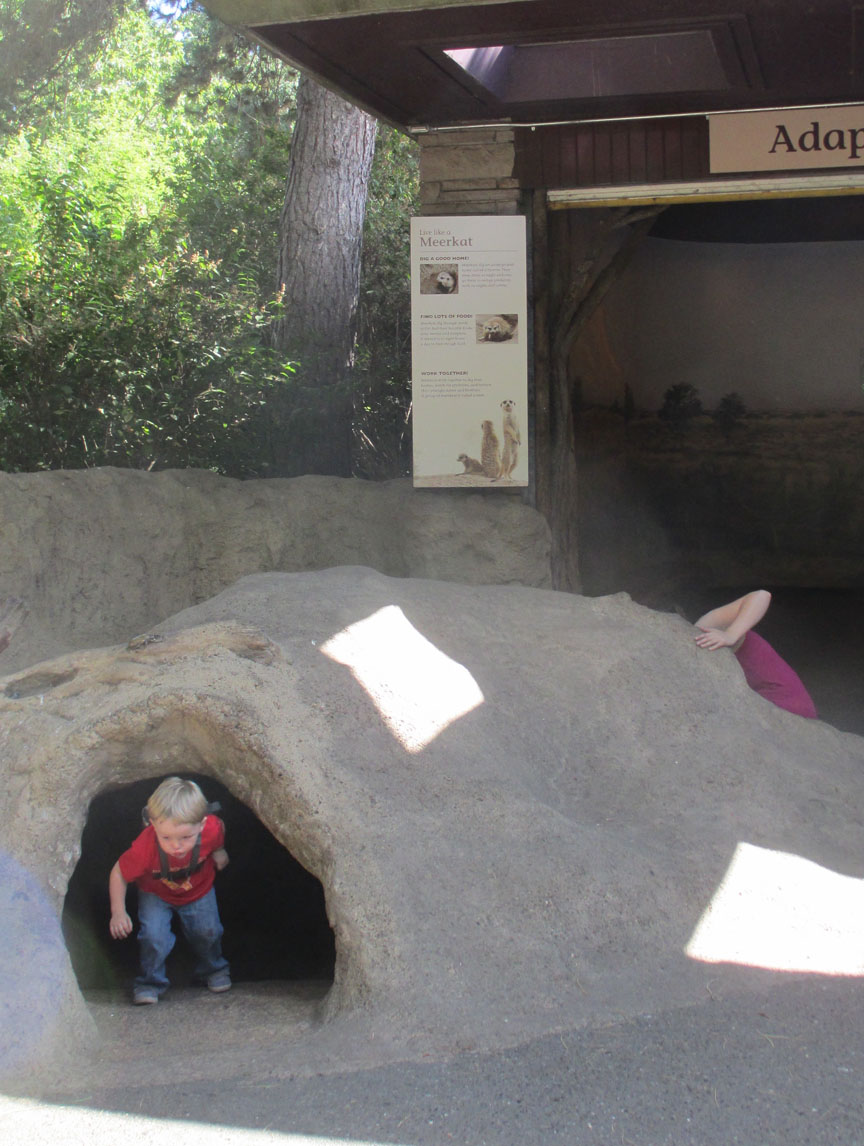 Children can walk and crawl in the mound and pretend to be meerkats. This boy was playing “evasion” while his mother tried to lure him out of the mound. 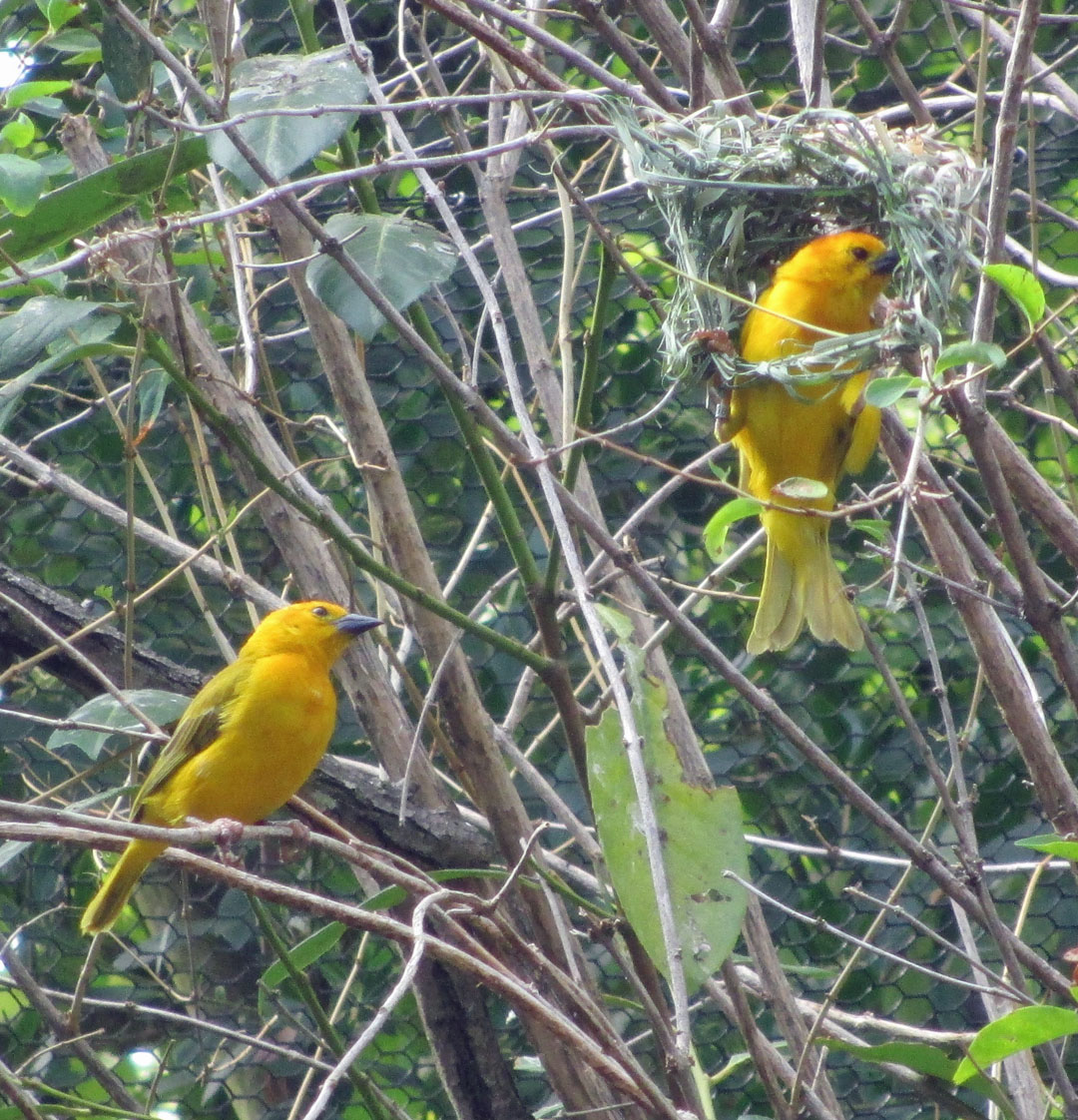 In the savanna aviary we spent some time watching the noisy and gregarious weaverbirds. These are colorful, social little birds that live in large groups, often building many nests in a single tree.

The male weaverbird uses fresh grasses to weave a pear-shaped nest, starting with a ring and building outward. When it’s finished, he hangs upside down from the nest, wildly flaps his wings, and loudly sings to attract a mate. 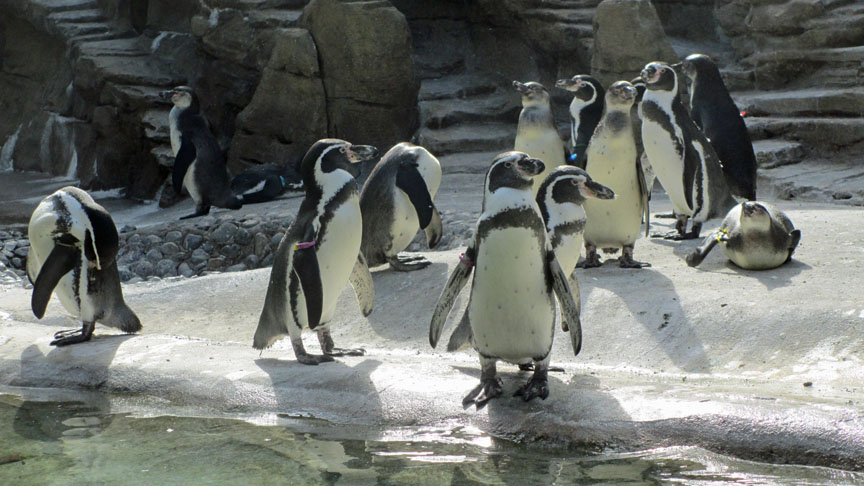 Next we checked out the exhibit of Humboldt Penguins.

These guys have a dark strip across the breast when the bird is an adult. Chicks have no strip on their breast. They eat anchovies and other fish, have a second eyelid so they can see well underwater, and can swim up to 17 m.p.h.

Since we have lived in the Amazon, we left the Tropical Rainforest for last. Since time was running out on our day at the zoo, this proved a sensible personal choice.

The Woodland Park Zoo belongs to the Association of Zoos and Aquariums. This organization believes that “contemporary animal management, husbandry, veterinary care, and conservation practices should be based in science, and that a commitment to scientific research, both basic and applied, is a trademark of the modern zoological park and aquarium.