An Unholy Day in the Holy Land - But Why and How?

Visiting the Holy Land was my lifelong wish. When our cruise line offered an all-day excursion to Biblical sites in Jerusalem and Bethlehem, it was the perfect opportunity to realize that dream.

Along with visiting the nexus of three major religions and diverse cultures, I savored thoughts of spiritual reflection and the chance to relish the same lands, skies and climate where illustrious prophets and saints lived and worked. While that experience came to pass in a very positive way, feisty behaviors, conflict and dissonance percolated throughout the day.

Our group completed entry forms and appeared for “face control” in front of bored and inattentive Israeli security officers. Passports are not stamped because Arabic countries will not allow travelers to enter if their passports contain an imprint from Israel.

At dawn our motor coach left coastal AshDod rolling though the verdant kibbutz-dotted Elah Valley crossed the hills into Jerusalem. By 8:30 a.m. we were atop the Mount of Olives.

Our first panoramic view of modern buildings and archaeological ruins fabricated from yellow limestone glistening in the morning light captured the uniqueness and splendor of this remarkable holy city.

Immediately we were accosted by cacophonous hawkers selling postcards and camel rides and jostled by multi-national sightseers pressing for the best views and camera angles. We were warned that pickpockets also roam the lookout. Afterwards in the bus, two men moaned that their wallets had been snatched.

The Garden of Gethsemane

Proceeding downhill, we walked through the Garden of Gethsemane, rich with roses and venerable gnarled olive trees believed to have witnessed Jesus’ last night before his arrest. 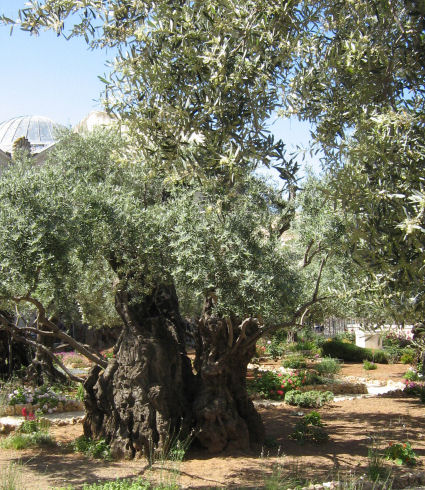 Next to the garden is the Church of All Nations which houses the gleaming Rocks of Agony where Jesus prayed on the eve of his Passion. Worshippers wishing to touch them or prostrate themselves are allowed inside the knee-high interior fence which surrounds the boulders.

A Mass was being celebrated so those participating in the service were distracted by the devout absorbed at the rocks. “No Talking” signs are posted but the din was thunderous with scores of tour guides shouting and hundreds of visitors chattering simultaneously.

Our next stop was the 220 acre Walled City of Old Jerusalem to visit the Church of the Holy Sepulcher, the most important shrine in the Christian world. Christ’s marble tomb rests on the first floor off the crowded courtyard and again there were lines of visitors praying, touching, or rubbing the tomb with fabric or paper to create personal relics.

The Church is multi-storied with small, dim alcoves of altars connected by narrow stairs and precarious stone walkways leading to areas where five of the fourteen Stations of the Cross occurred. 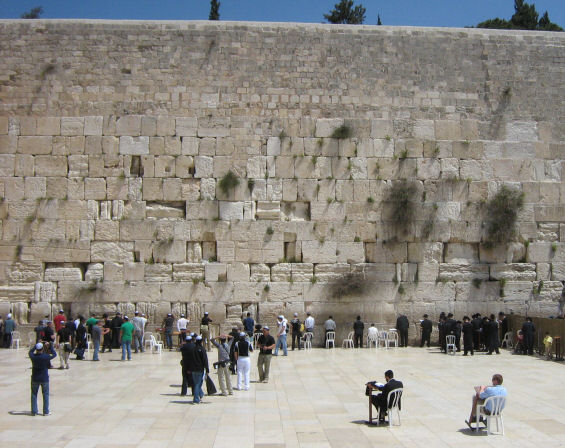 The massive 2000+ year old 1000 ft. long by 65 ft high Western (Wailing) Wall is the world’s most religious Jewish site and on this sunny Tuesday, approximately 1500 worshippers and sightseers mingled on the plaza. Men and women pray in separate areas and head coverings are required for men. Their section, which is much larger, provides chairs and kneelers: not so on the women’s side.

The faithful of all religions leave prayers or messages on notes slipped into the Wall’s fissures. The Middle East’s’ oldest and loveliest Islamic shrine, the octagonal Dome of the Rock, abuts the square and dominates the skyline.

Adjacent is Calvary Hill, now a chapel but originally a low mound of rubble and dirt. Camera flashes are a constant, and pulsating throngs push laggers so there is little time for meditation.

Departing the Church, we hiked the labyrinthine 2/3 mile Via Dolorosa which traces Christ’s path from his condemnation by the Romans to his crucifixion and burial.

Less than 12 ft. wide, the Via is a narrow cobblestone passage encased by small shops and high walls and features countless steps uphill or downhill depending on which entrance you access.

Entering the Lions Gate on the west allows you to trace Christ’s uphill path, while entering at the New Gate insures a more comfortable downhill stroll although the Stations are encountered in reverse order.

Small signs designate where events commemorated by the Stations, such as Veronica wiping Christ’s face with her veil, are believed to have taken place.

Signage is in English, Arabic and Hebrew, but easy to miss while negotiating the slippery steps and heavy pedestrian traffic.

The Way of Sorrows is both a religious site and a commercial district. Jewish, Islamic and Christian artifacts are for sale, along with souvenirs, household goods, clothing, and Eastern Mediterranean foods. Merchants relentlessly assail passersby.

Our fifty-ish guide, Ruta, engaged in a shoving match with a storekeeper whom she accused of pushing her. Acrimonious words were exchanged in Hebrew until we moved away.

At the end of the walk, we passed through a security station for bag check and passport inspection to access the grounds of the venerated Wailing Wall. 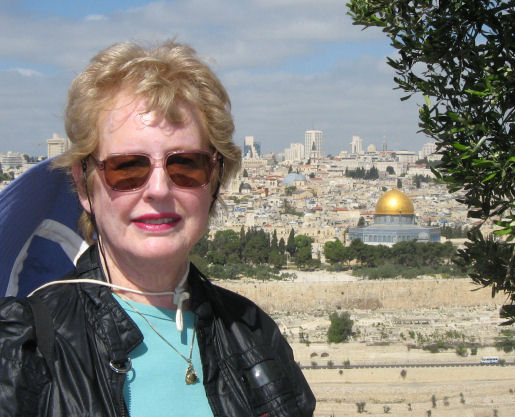 Cam with the Dome of the Rock in the background

Muslim calls to prayer echo across the plaza mingling with the devotions of Christians and Jews while church bells peal in the background.

As we exited at the Dung Gate (historically a refuse dump), Ruta and Delphina, the cruise ship’s representative, began to harass each other about the location of our waiting bus which was parked right across the street.

Six miles down Hebron Road to Bethlehem, a late lunch awaited us. Bethlehem is in the Palestinian West Bank , resulting in a lengthy border crossing.

Upon reaching the frontier, Ruta, who is Jewish, advised that she would be leaving us temporarily because she is not permitted to enter Palestine; however we would be joined by her Arabic counterpart.

Before leaving AshDod our bus had been cleared for this crossing, but the militia again reviewed the passenger list and thoroughly inspected the vehicle. Clearing the checkpoint, two youthful soldiers with machine guns boarded and remained with us for the rest of the afternoon in the West Bank.

One rode shotgun by the driver and the other was posted across from the rear door. Both were friendly and conversed familiarly, saying they wanted to practice their English.

Compared to the frenetic pace and clamor of Jerusalem, Bethlehem is a benign and tranquil respite surrounded by vineyards, olive groves and shepherds’ fields. Alim, our new escort, joined us just in time for lunch.

Rejuvenated and anticipating the mosaic and mother-of-pearl splendor of the Church of the Nativity, the group headed to Manger Square. Our border crossing and lunch had cost us time and there was a 90-minute wait to descend into the cave where the Nativity occurred.

Since the grotto is divided by an impenetrable stone wall, there is a secondary entrance with no wait but we would miss the pivotal side highlighting the bronze star embedded in white marble which designates the place of Christ’s birth.

Controversy surrounds this site since it is not certain on which side of the cave the birth took place. Alim suggested the larger and more convenient second entrance and it was then that mutiny ensued. A long argument transpired between Alim, several group members determined to see the star, and Delphina, who insisted on a punctual return to the ship.

During this debate, a choir of visiting German seminarians spontaneously intoned a Gregorian chant providing incongruous counterpoint. Finally, majority ruled and climbed down the alternative access which curved through the habitat of St. Jerome, translator of the gospels from Hebrew and Aramaic into Greek and Latin.

Seven passengers opted out of the visit to shop at the neighboring souk. Unable to locate the bus, they found it 30 minutes after the scheduled departure and endured much haranguing by the other passengers.

A final stop at a kitschy religious artifacts warehouse ended our Bethlehem visit. Before reaching the border again, Alim and the soldiers left us and Ruta re-boarded the bus on the Israel side.

It was 6:00 PM so the driver chose the longer route with lighter traffic back to AshDod. We were able to unwind and enjoy pastel meadows, orange orchards, and archaeological digs in sylvan settings.

On a weather-perfect April weekday when crowds are relatively sparse, the volume of sojourners exploring the holy sites in Jerusalem is still overwhelming.

The best way to visit is with a tour group conducted by a guide who can deal with aggressive vendors and navigate through convoluted passageways, congestion, heavy vehicular and pedestrian traffic, and excessive street and sidewalk barricades.

Although the religions co-exist harmoniously, a devout experience or spiritual insight are almost out of reach; there’s too much noise, not enough time for reflection, and the sacred venues are overrun by flocks of tourists.

Expecting to encounter a modicum of friction and aggravations will make them easier to handle so you can appreciate the Promised Land’s enrichment and many rewards.

It is absolutely worth the mindset.

Editor's Note: The views expressed on this page are those of the author, and do not necessarily reflect the views of Adventuress Travel Magazine.