The staff at Tomales Bay’s Blue Waters Kayaking did not feel that the winds would increase and well, the white caps were not too big - were they? 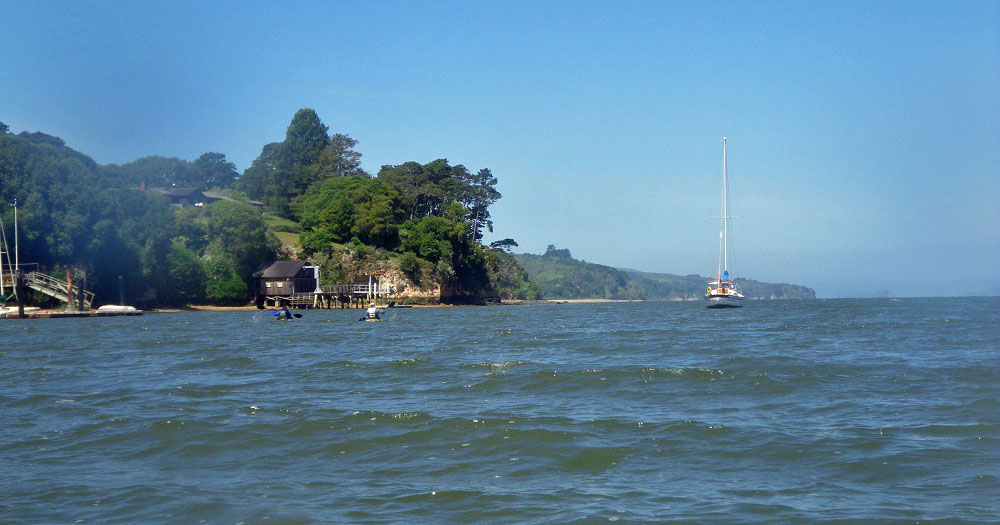 Marshall beach was located two miles west of the Blue Waters Kayaking Shop. We dug our paddles deep into the water to move forward. Going with the current should have helped, but the high winds continued to try to push us backward. There was no resting. If we stopped paddling even for just a moment, we lost ground. 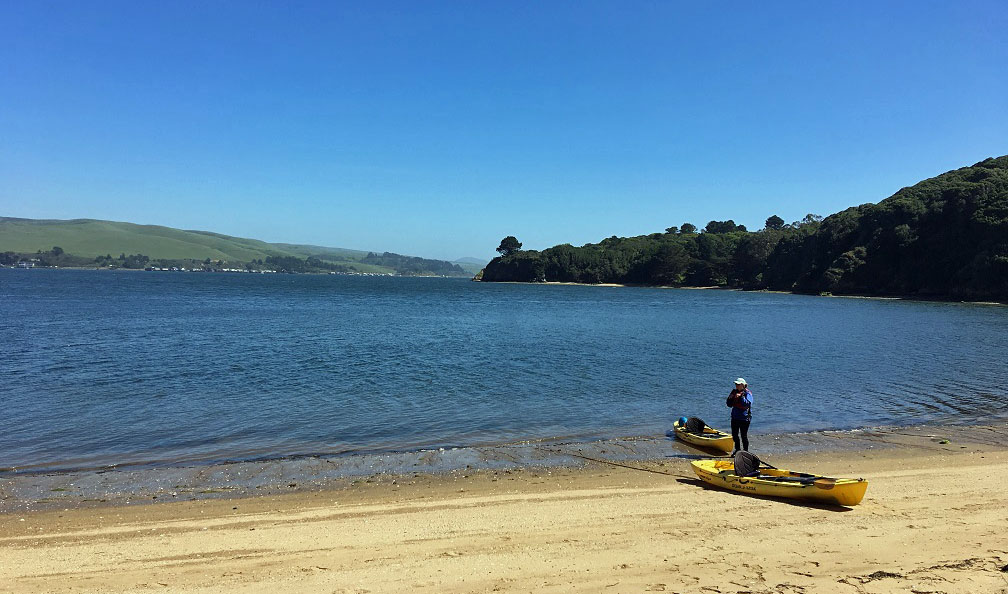 Marshall Beach was just around the bend. We pushed on hard, aching with every stroke. Connie fell behind, but was still within earshot. Turning the bend, I confronted “the washing machine.” 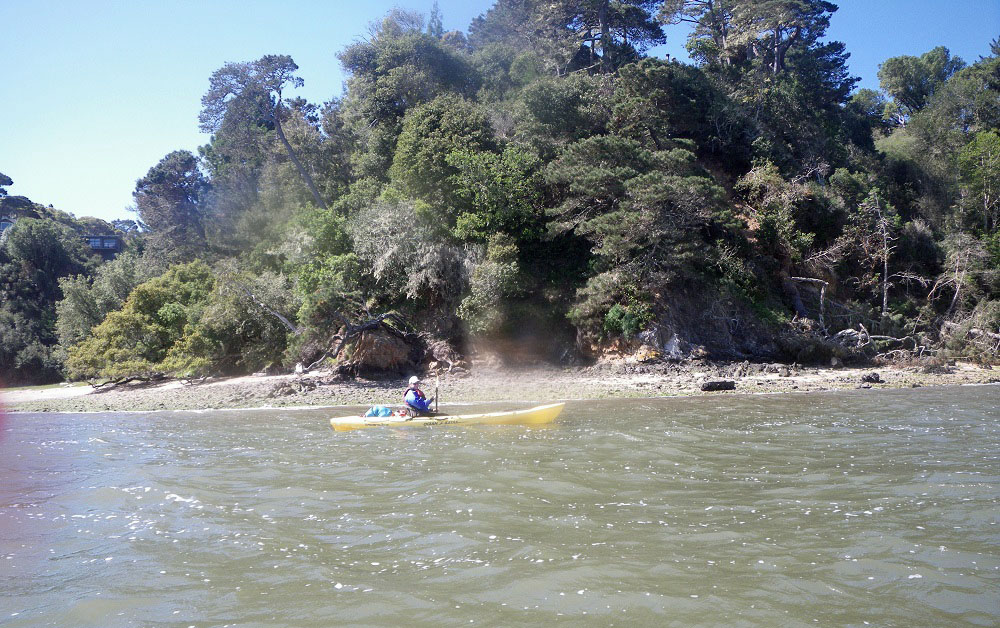 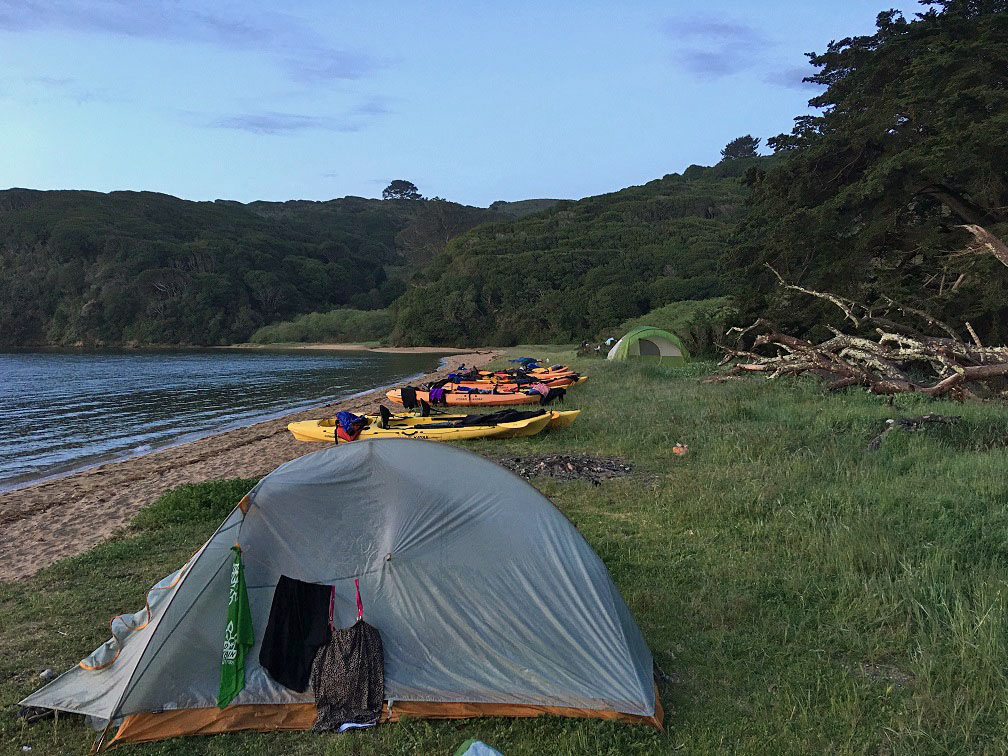 As the day went on, the wind died down and the waves calmed. We cooked pasta with red sauce for dinner and relaxed knowing we had earned the privilege of sleeping on the sandy paradise at Marshall Beach.

As the sun went down, a chill entered the air. We retreated  to our individual tents for the night and mentally prepped ourselves for the return trip the next morning.

The sun rose in the sky and glistened on the still waters of tranquil Tomales Bay. We heated coffee and drank from our lightweight titanium cups. Reconstituted beans, avocado, and tortillas made for a tasty breakfast of burritos. 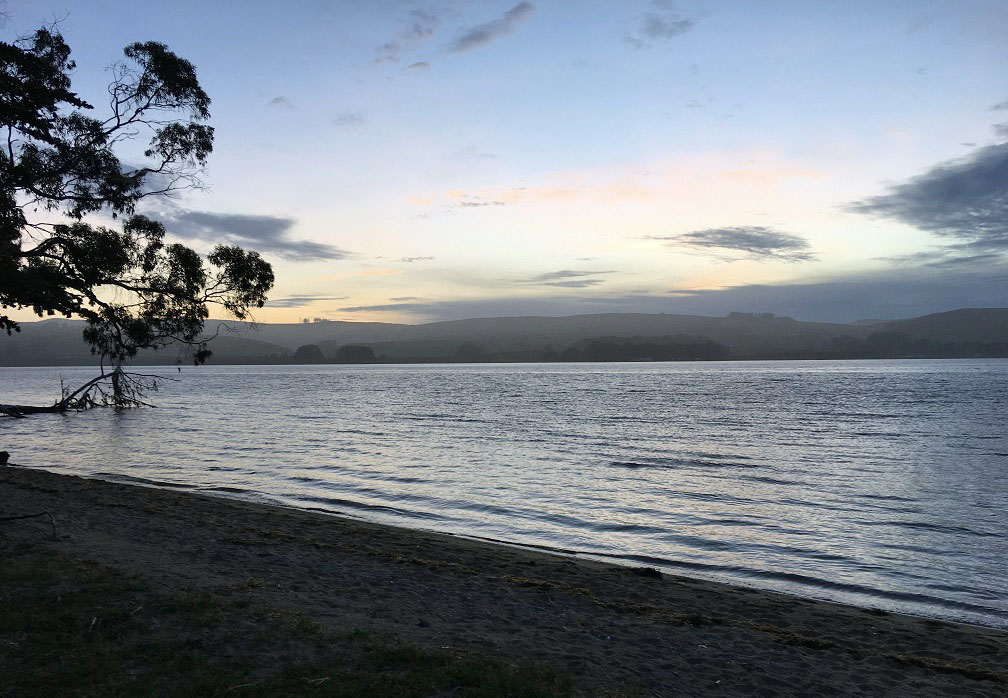 We packed our tents and gear and tugged and pulled our way into our damp wetsuits. The women leading the girls’ group approached us and asked if their spirited noise had kept us up in the night. We said “No.”

They responded with grace and admiration, stating that the girls commented on how the ladies (Connie and I) had kicked butt against the waves. They were very impressed at how quickly we arrived at the beach and how far we stayed ahead of them.

These were empowering words. It’s rare for two women, ages fifty-two and fifty-three, to impress eight high school girls. A real feat, proving that you are never too old for exciting adventures.

The paddle back was easy, and gloves helped ease the pain from blisters earned the previous day. The return trip to Blue Waters Kayaking took one hour and 45 minutes, which was less than half the time it took to get out to the beach.

The staff helped us pull our kayaks back up onto the beach. We chatted with them for a while, unpacked our gear, and loaded the car.

On that bright, sunny day we felt a true sense of accomplishment.

My longtime friend Connie and I car camp with our families, backpack, and sometimes have the blessing of staying in luxury accommodations.

This time we sought out something new, and the kayak/camp trip fit the bill. If you are looking for a new kind of adventure, give kayak/camping a try.

--story and photos by Tracy Beard

Tracy Beard is a freelance writer specializing in travel, non-profits, alternative medicine, and direct response copywriting. As the founder and past president of an international children’s non-profit, Tracy traveled extensively, empathized with people in need, learned the importance of good health, and raised funds writing exceptional direct response copy.

Her thirteen years of experience writing in various genres has added to her expertise. She is a member of AWAI (American Writers and Artists Inc.) and ITWPA (International Travel Writers and Photographers Alliance).

If you liked this story, read other adventures with Tracy Beard:

Sailing on a Windy Day in Sardinia

Going Downhill in the Island of Crete’s Samariá Gorge